Pickling can happen any time there are ripe veggies for the picking. Now it’s cucumber season, which lasts basically all summer long. Beans are upon us, too. Soon come the pickled peppers, large batches in large jars, sometimes with carrots. Then maybe some beets.

Vinegar pickles are a versatile way to go that can accommodate anything you could want to eat pickled, from cauliflower to kohlrabi, not to mention the asparagus that’s already come and gone. I do all of my pickling in basically the same go-to brine recipe. With small adjustments here or there, it works for pretty much anything.

Use Kirby-style, aka pickling cucumbers—the kind with the little bumps/spikes on them. These can withstand higher temperatures, without getting soggy, than slicing cukes. They should be small, no more than five inches long and an inch or so wide, and fresh.

Heat the brine on medium, adding sugar a little at a time until it doesn’t quite taste sweet but takes the edge off the vinegar—about a tablespoon per quart. While the brine heats, add a tablespoon of mustard seeds to each jar, and a tablespoon of salt. When the brine reaches a boil, pour it into the jars so it covers the veggies and still leaves a half-inch of headspace; screw on the lids. Process in a water bath for 15 minutes (for cukes).

Living life on a pickle’s edge isn’t for everyone, and for liability reasons I need to stress that if you even consider not cooking your pickles you will immediately contract botulism and your house will burst into flames. If you cook your cukes, they can still come out crispy enough if you use Kirbys that are young and fresh, and add a grape or horseradish leaf, for example. And if those aren’t crispy enough, keep a batch of fridge pickles going. Or maybe it’s time to venture into sour pickles, which aren’t cooked either. The lazy crispy pickle. 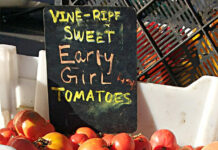