Creativity in the classroom 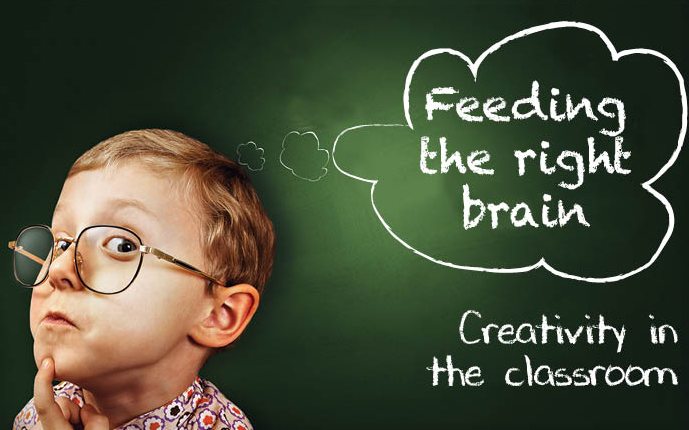 My teacher asked me what questions I would have for Leonardo da Vinci if I could go back in time and talk to him,” says Nell Jerde, a 13-year-old seventh-grader at the pre-school through eighth-grade Greenwood School in Mill Valley. She is currently studying the Renaissance in one of her classes, and this type of learning is why she says she loves her school.

Nell’s mother, Jennifer Jerde, a Mill Valley resident, believes that this kind of creativity in the classroom is critical to a child’s personal and professional development, and for helping to assure success later in life.

When the girls were in another pre-school program, Jerde had heard about the Greenwood School and felt strongly about sending her daughters there. “When the kids were little, I realized that I wanted them to get an education that enabled them to be creative, and by that I mean that they could problem-solve and make things that didn’t exist before,” Jerde says. “Play is the work of a young child, and imagination and creativity come out of play.”

So how important is creativity in early education? There is no question that it is important for kids to get a solid education in the basics like science, math and social studies, but there seems to also be a need for “out-of-the-box” thinking to succeed and excel in today’s world. Research on this topic in the past few years led California to adapt the Common Core Standards, a set of evidence-based educational standards (developed in consultation with teachers and parents from across the country) designed to help students from kindergarten through the 12th grade learn what they need to know in order to be successful in college, career and life.

Jerde understands the importance of creativity—she runs her own brand identity firm that develops both strategy and visual concepts for a variety of companies. “People have this misconception that creativity is not as important as the more measurable things like math, and that art won’t enable people to be gainfully employed,” she says.

Jerde believes that exposing kids to a lot of media is not good for them, and she likes the fact that the Greenwood School puts the emphasis on kids cultivating their imagination, without too much mass media input. “When you expose young children to media like TV,” Jerde says, “they aren’t creating, but are reenacting things they have seen. Active creativity only happens when they are exposed to other stuff.”

Her daughter Nell agrees. “A lot of creative thinking is involved in the learning and the teaching and a lot of art is used [at the Greenwood School],” she says. “We are always encouraged to try to think of new ideas and different ways to do things.” She is especially interested in this kind of learning since both of her parents are in creative fields (her father is an architect).

In addition to the Greenwood School, there are a number of other schools and organizations in Marin County dedicated to promoting creative thinking in early education—to feed the right brain. One of these places is the Marin County Office of Education, which is launching a program this month called the “Integrated Learning Specialist Program.”

The program includes three (voluntary) courses for teachers, and is designed to teach them how to take a more creative approach to teaching core classes—integrating such things as art into their teaching method.

Chris Spores, Director of Education Services for the Marin County Office of Education, found the program while observing a class in Alameda County (which is partnering with them) and got very excited about it. In that class, teachers were showing students a plan for a new project, but in a creative way—they had put the plan on a large piece of paper/artwork they had made.

“The idea is that [the program] is going to improve classroom teaching and learning across all subject matters,” Spores say. She is excited about promoting the program because it “aligns beautifully” with Common Core, by using lots of critical thinking. “The arts get integrated into the classes like social studies and language arts—it’s a blending of the two.”

The common theme seems to be that by integrating these kinds of activities and projects into regular classes, kids’ imaginations will be sparked. “I think that most teachers teach to their strengths, and this opens them up to reaching more students—like those students who really are very musical,” Spores says.

“This would allow that type of student to relate to the curriculum in a different way. Part of it is engagement and part of it is the way in which they learn. Integrating the arts into a science or history class—I think it’s just a more thorough way of teaching.”

Archie Douglas, head of the Greenwood School, believes that creativity is essential for development and success in today’s world. One way the school accomplishes this is by not introducing computers into the classroom right away. “Until the introduction of ‘Digital Literacy and Citizenship’ in the sixth grade, you will not find technology at Greenwood,” Douglas says. He claims that there is a growing pile of documentation that supports the theory that “early-age screen time stifles creativity, reduces concentration spans and inhibits the development of crucial interpersonal skills.”

“I like to say that students need to learn to use the computer that sits on their shoulders first—there will be plenty of time for tech in the years ahead,” Douglas says. He claims that as a result of this approach to learning, Greenwood School graduates “regularly demonstrate their creative, integrated, outside-the-box thinking—in high school, in college and beyond, that helps them to be successful throughout the rest of their lives.”

Douglas also believes that standard teaching methods can tend to teach kids to develop only part of their brains, which can turn them just into straight linear thinkers who only understand how to use the scientific method, and not how to be intuitive. “Then kids will just be like computers or robots,” says Douglas, “not thinking flexibly and not out-of-the-box, which will just turn their brains into boxes. What we are building here at Greenwood School is better brains).”

“Not everyone will be the next Steve Jobs,” he adds, “but a lot of them will be artists and self-employed. Their education has taught them freedom, not conformity, and that freedom will serve them well in the fluid and challenging world ahead.”

Dr. Valerie Pitts, Superintendent for the Larkspur-Corte Madera School District, says that there has been a huge transformation in education since the beginning of the 21st century, and specifically in the last three to four years. “We are shifting from this incredible focus of the last two decades that we have had on content, to our new standards which incorporate this element of deeper thinking and problem-solving, and tapping into that creativity that kids have—that sort of limitless potential to be able to look at things a little bit differently,” she says. “The new standards are more rigorous and more built around this notion that we need to teach kids how to problem-solve, think critically, communicate, collaborate and be creative, which we have come to call ‘21st century skills.’”

Pitts believes that this new approach to teaching and education is crucial and says that teachers she works with are very excited about it and are constantly thinking of new ways to tap into kids’ innate creative ability and to help shape it.

“We are always moving forward in education to keep up with the times and the information flow,” Pitts says, “and it has always had an impact on what’s going on in our classrooms. And in the 21st century, we know that these skills are really critical for success, so they are being taught in classrooms as early as pre-school.”

Another organization that takes an imaginative, interactive approach to education is the Bay Area Discovery Museum in Sausalito. Their mission is “to ignite and advance creative thinking for all children.” In addition to their exhibits, they offer a wide variety of classes, camps and events, including a Center for Childhood Creativity with presentations on a variety of topics, and an annual Creativity Forum—a thought leadership luncheon for parents, educators, business leaders and the research community that includes a panel of prominent speakers in the area of education.

She adds that although their school programs do focus on developing STEM (Science, Technology, Engineering and Mathematics) skills, the museum programs support learning those basic standards through methods that also develop essential skills such as creative and critical thinking, which will serve children the rest of their lives.

Eisenmann believes that creativity is an essential element of the learning process for kids. “Creativity sometimes is perceived as a trait that is limited to the arts and that is largely based on genetics (either you’re born creative or you’re not), but neither is true,” she says. “Scientists in particular exercise creativity as they explore new ways of thinking about our world and investigate their questions.  Creativity has been shown to be less heritable than either IQ or personality, meaning that the contribution of the environment is tremendous. A child becomes a more creative individual when the environment encourages creativity, for example, by allowing a child to make decisions and work collaboratively. It is no longer enough to just have a lot of knowledge—you have to be able to come up with new and creative ideas to solve problems and work with lots of different kinds of people to succeed in our current economy,” she says.

Ask Lily about her creative endeavors at [email protected]

Previous ArticleLetter: ‘She made light of both the oughts.’

Next ArticleLetter: ‘I remember when pickup trucks only had two doors.’