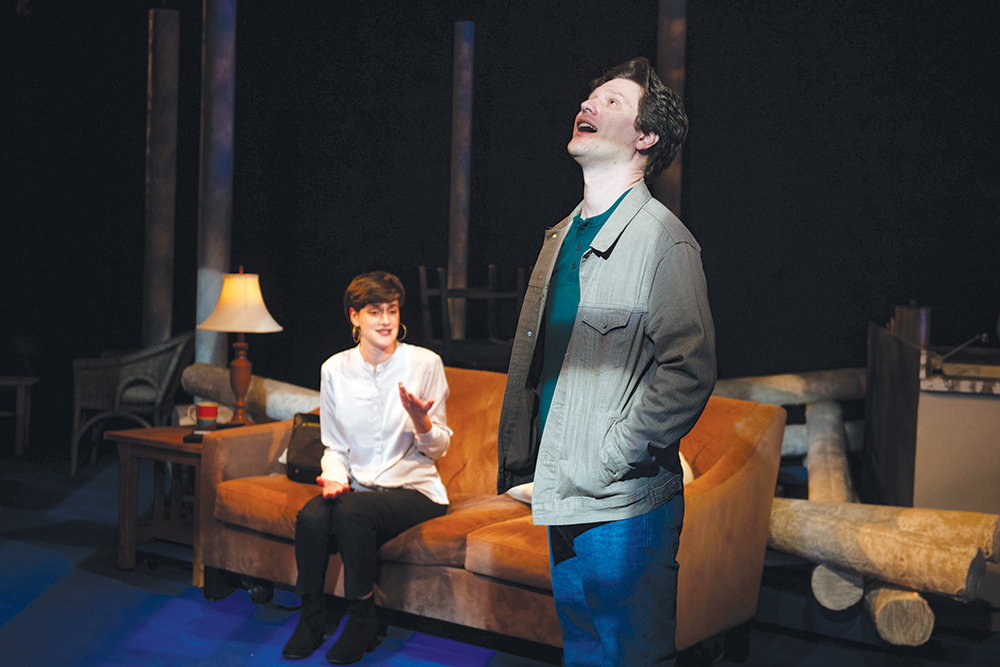 What was he doing, the great god Pan, / Down in the reeds by the river? / Spreading ruin and scattering ban . . .

These opening lines from the Elizabeth Barrett Browning poem “A Musical Instrument” are spoken midway through Amy Herzog’s The Great God Pan, now running in a gripping production directed by Taylor Korobow at Petaluma’s Cinnabar Theater. It’s an 85-minute-long treatise on the power of memory, its oft-foggy character and the ruin that can emerge from the deep recesses of the mind.

Frank (Nick Sholley) and Jamie (Aaron Wilton) are childhood friends who have not seen each other in 25 years. Frank has reached out to Jamie to share some disturbing information: he’s filing a case against his father for sexual abuse, and he wants to know if Jamie has anything he wants to share.

Jamie, while insistent that nothing happened, begins to investigate his own past. He speaks to his parents (Richard Pallaziol, Susan Gundunas), who have their own revelation to share, and his old babysitter Polly (Kate Brickley), who is suffering from the onset of dementia but clearly remembers other events from Jamie’s childhood quite differently than he does.

The situation has added stress to an already brittle relationship with his girlfriend and social-worker-in-training Paige (Taylor Diffenderfer), who thinks Jamie’s childhood events may be an explanation for his homophobia, commitment issues and sexual problems. Or are Jamie’s problems a reflection of his upbringing by loving but aloof parents? Or are they just his problems?

And what of Frank? Polly remembers him as a liar. He himself says there are events he remembers that he chose not to think about, and things that he didn’t remember until recently. And then there are things recently described to him that he still doesn’t remember—yet. Even if everything he says is true, was Jamie ever involved?

The entire ensemble is superb with Wilton giving a tremendous performance as Jamie, a man whose very structured life is on the verge of collapse as he seeks answers to the questions raised by Frank. Those questions hover over the play like the forest-like set pieces designed by Jon Tracy. Tracy’s set is a terrific physical manifestation of the fluidity of memory, and the cast’s interaction with and manipulation of it is a mesmerizing component of the show.

An intriguing story, riveting performances and striking design combine to make a show that, once seen, is not easily forgotten.

Next ArticleThe Mutation of the Mother Hips