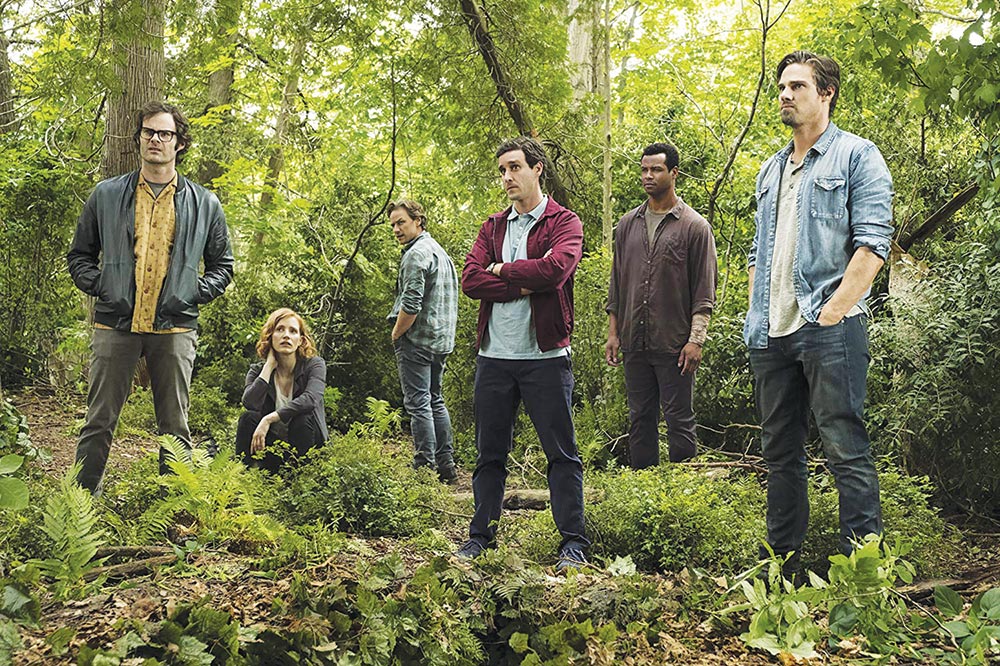 Stephen King once described the film version of Cujo (1981) as “a big, dumb Sonny Liston of a movie.” He was referring to a mid-20th century boxer: disreputable, graceless, but an unstoppable puncher. To which boxer would one compare It: Chapter 2? Some middle-weight who lands the occasional powerful sucker punch, but who mostly just sways around the ring until the bell is rung.

Andy Muschietti’s It: Chapter 2 is a textbook “getting the band back together” movie. Twenty-seven years later, we re-meet the Loser’s Club, that group of small-town rejects who sent Pennywise the Dancing Clown back to hell in 1989. As children, they swore a blood oath to return if the monster ever revived. Now, the six are recalled to action by Mike (Isaiah Mustafa). Mike stayed put at the hellmouth in Derry, Maine, living above the public library and studying the multi-formed horror (Bill Skarsgard).

The grown-up Losers all have serious worldly success. Derry, Maine, gives them a recovered-memory effect. Like the town where you went to college, the farther you get away from it, the more you forget why you left it in the first place. But what should arrive as slowly gathering evil instead arrives with the inevitability of a mandatory sequel. In the first It, Pennywise was more than just a bad clown; like Moby Dick, he was a mask some unknowable, pure evil glared through. And now we know what’s behind the mask, and the explanation is dissatisfying.

Some of it works. The creatures are fun, thrust rapidly into the camera and shaken like the props in a carnival’s dark ride. Someone will, and maybe should, pick apart the Jade of the Orient restaurant scene as a racist joke about the weirdness of Asian food. But there’s something to be said for the shock of all that blazing-green neon, and the way a banquet turns into a Hieronymus Bosch painting.

Far better is Joan Gregson as Mrs. Kersh, a longtime resident of Derry whom Jessica Chastain’s Beverly interrogates. Gregson is the best part of the movie. An old lady with a rictus of a smile and a peekaboo of ulcerated skin visible through a gap in her house dress, it’s easy to see why she dominated It: Chapter 2’s previews. She torments the molested Bev with loaded words: “I was always Daddy’s little girl”—it’s almost scarier than the yelp-inducing punchline. In a later scene, a leper-beast in a basement looks like Iggy Pop with a giant, prosthetic tongue. Less effective is a severed head that sprouts jointed crab legs and walks off—more horrifying in John Carpenter’s The Thing (1982), maybe this monster appears here as a reference to the underwhelming origin story of the killer clown.

There’s an anecdote about Greta Garbo being disappointed by the ending of Beauty and the Beast (1946) and saying, “Give me back my beast.” One wants the Losers back. The kids grew up into successes, the opposite of the way it usually works after childhood trauma. Ben, the fat kid (Jeremy Ray Taylor), grew up to be muscular, and now apparently owns a yacht. Yesterday’s wiseass Richie (Finn Wolfhard), now played by Bill Hader, is an immediately recognizable TV comedian—unhappy, but successful. James McAvoy’s Bill is horror-novel-writer surrogate for Stephen King. The distracted Chastain doesn’t seem at all reminiscent of who Sophia Lillis’ teenage Bev would grow up to be. In flashbacks, Lillis is very touching, and few things in It: Chapter 2 bear as much horror as the scene where Bev’s father perfumes her with an atomizer before doing whatever it is he does next. The scene has a Blue Velvet vibe.

Give It: Chapter 2 credit for suggesting the monster rejoices at anti-gay violence; bad enough that it bites the heads off children, it is also a homophobe. Still, this script needed the attention of someone funny. It’s padded with rock climbing, swamp-swimming and hand-holding. This creature is not just one of sudden violence, but of blocked drains, sewers and puke-fountains. It: Chapter 2 illustrates a King technique; if it can’t work the levers of terror or horror, it goes for the gross-out.

‘It: Chapter Two’ is playing in wide release.

Film: To the dogs