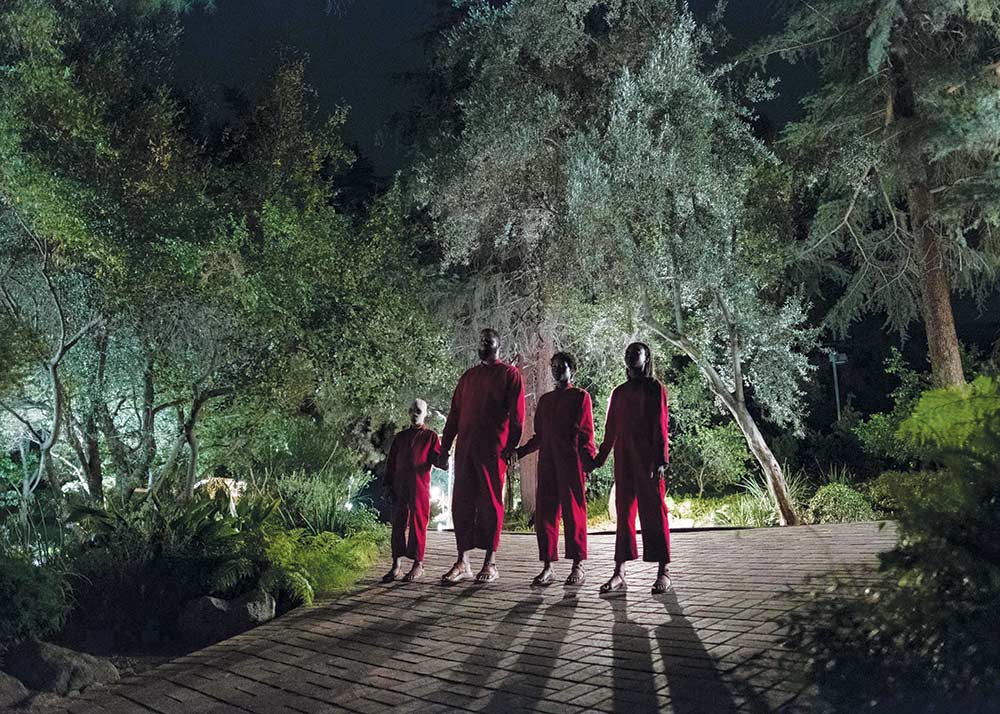 The top 10 films of 2019, in alphabetical order: The Big Hack, Captive State, The Irishman, Jojo Rabbit, Joker, The Lighthouse, 1917, Once Upon a Time…in Hollywood, Parasite and Us.

“We’re Americans. Get the rope.”—Us

Such is my country these days. We seem to be Rotvalla-pissers one and all, like the chump in Midsommar who wees on the sacred, dead ancestral tree of the Swedes.

I suppose we’ll be spending more time in the bunkers before we get out to the barricades next year. This year’s cinema was heavy on stories of the immured (Parasite) and the entrenched (1917). In 2019, even Captain America said, “To hell with this, I’m heading for the past.”

In Jordan Peele’s eerie parable Us, America isn’t filled with just the rich and the poor, but with the influencers and the influenced. It isn’t easy to pick apart his story of the hordes in their government-funded Plato’s Cave. Yet it does merit space next to the business of the grateful, kowtowing subterranean lodger in Bong Joon-ho’s uproarious Parasite, a movie composed with a perfection rivaling Hitchcock’s. Joon-ho’s film takes place in such a complete Yankee colony that little will need to be changed if they have to do an American remake. (Shoot it in Houston where grotesque wealth and flood-plain hovels go side by side).

Captive State demonstrates what a real occupation and a real resistance looks like, with alien overlords dwelling in their own cellars (they rule us from underground, because they can’t bear human stink). The Great Hack was another type of horror story about rats in the walls; a terrifying documentary about the kind of social-media manipulation that overthrows governments.

An escape from the present, Once Upon a Time…in Hollywood is, on this list, “one of these things that is not like the others.” It’s not just edgeless nostalgia, a fantasy of wide-open spaces; but an irreplaceable vision of L.A. as a mecca that distingerates under people’s feet, a “slide area” in writer Gavin Lambert’s phrase. It’s the glittery version of Scorsese’s masterful vision of the blandness and crookedness of mid-century America, The Irishman. HBO’s The Watchmen, which would have been on this top 10 list if it were a movie, also had the sense of the walls closing in—the bunker-dwelling Looking Glass (Tim Blake Nelson) is similar to the entombed prisoner of Gotham, Arthur Fleck in Joker. The Watchmen also parallels The Irishman’s idea of a sense of a decades’ worth of defective history, ignoring what ought to have been taught.

Jojo Rabbit took its own liberties with history, even with its own version of Anne Frank concealed in the attic—maybe it’s a measure of the shocks we’re enduring that the funniest movie of the year had the gallows in it. One feels a little cheap awarding Waitit’s robust film precedence over Terence Malick’s ode to ultimate Nazi resistance, A Hidden Life. The latter is one the most beautiful advertisements for martyrdom ever made. Malick’s images of the peace and beauty of farming in the Alpine foothills left nothing to be desired. As an interminable vision of moral stalwartness it recalled the Mark Twain quote: “Few things are harder to put up with than the annoyance of a good example.”

By contrast, Robert Eggers’ glorious black-and-white The Lighthouse is lighter, in a dark and horrible way. It’s based on the lovely old Down East joke with the punchline, “Oh, don’t dress up. There’s only going to be the two of us.” Here a sordid-and-flatulent old lighthouse keeper (Willem DaFoe) and a young pup (Robert Pattison) are trapped in their own phallic prison. Made by one of the last directors who really seems to read; it was one diabolical mindbender, teasing the opposition that attracts. Whether we like it or not, in the lighthouse America, there’s no “them or us,” there’s just “us.”