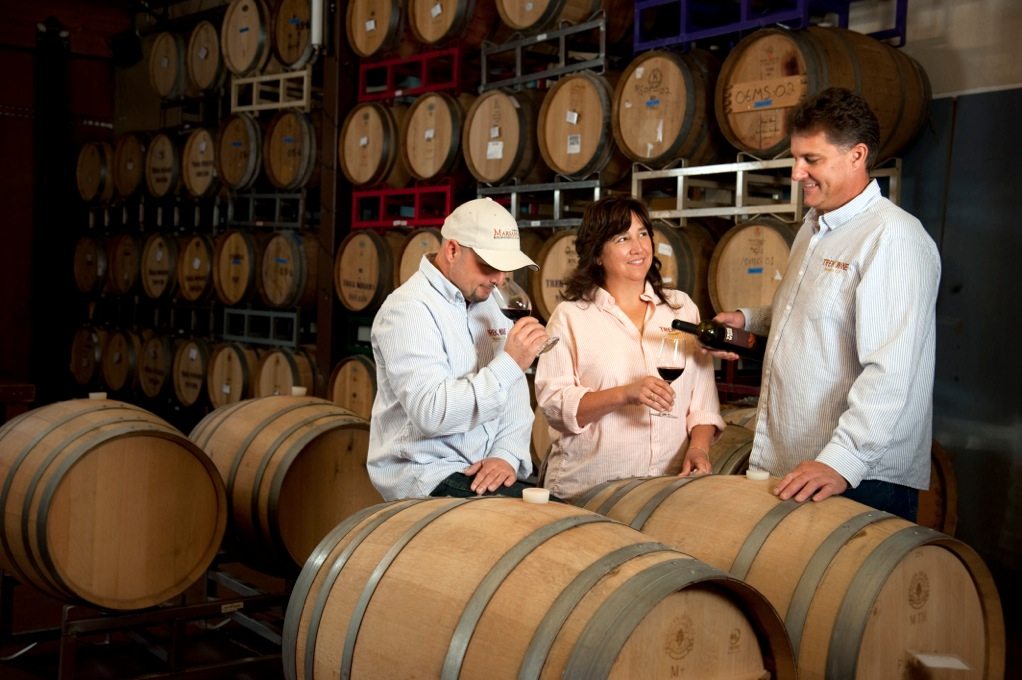 Last month I attended a Battle of the Bands event at Trek Winery in Novato. I personally knew many of the teenaged musicians who were competing against each other. I wanted them all to win … so I had to drink to endure.

While I sat there on a comfy leather lounger-style chair, with my locally crafted glass of chardonnay, listening to original rock tunes and jazz by teens-with-too-much-talent, I realized how much I loved chilling at Trek Winery. “I could easily move in here, under those Aspen trees and live happily ever after,” I said to a nearby parent who was glaring over the shoulder of one of the judges. The parents were all trying to play it cool on the outside. But inside, parents of musicians (yours truly) are just as annoying and competitive as those obnoxious soccer parents. You want your own kid’s band to win or there’ll be a screaming match with the coach. In this case, Andy Podshadley, owner of Trek Winery.

After the show I stalked, I mean, “introduced myself” to Mr. Podshadley. I was trying to shield him from the brutal thugs (parents of musicians) hovering nearby. But I learned that the winner of the Battle of the Bands would not be chosen for another week. Phew, he was safe. At least temporarily.

I learned that the 11,000-square-foot building has a private tasting room, a kitchen, a lab, a main tasting area with a bar, and a spacious patio with a waterfall and koi pond. The winery, which opened its doors in 2012, hosts various events and is becoming the local spot to view the Academy Awards each February. (The money raised that night is donated to the Novato Theatre reconstruction project.)

The winery is located at the old (1940s) Tresch Electric Building at the corner of Machin and Sweetser avenues. This green winery, renovated by mostly volunteer friends and family in 2011, has become a happy and relaxed gathering place for the Novato community, which is just what Podshadley, a Novato native, and his wife, Liz, had hoped. I talked to Andy to get a behind-the-scenes look at the family business.

OK, let’s start with the name of the winery. Trek bicycles and CBS Studios both had their knickers in a twist because you used the Trek name. You survived a lawsuit from the bike company and a threatening letter from CBS, who later, decided to leave you alone. Explain why you chose the name Trek Wines?

The name has two meanings. We enjoy the outdoors and also as a wine educator I feel people taste many wines as they progress through the wine spectrum. They take their own wine trek. We started the winery as a way to blend our love for outdoor exploration with our love for making great wine. I even wanted to have a climbing wall inside the winery, too, but Liz said no.

You are considered a green winery. Even your icemaker recycles water. Well done!

We have found that our ice machine wastes 1.2 gallons in a 24-hour period and our ice machine is small. We catch the water in a 55-gallon drum and reuse that water. We also want to have the entire winery solar-powered. We have a very large footprint on our roof and want to make use of as much as possible. We’re hoping to talk to Marin Clean Energy and others to see if they are interested in the power we do not use. We should have the solar project done by spring 2015.

For years you and Liz leased a warehouse in Sonoma to make the wine and operated the rest of the business out of your home. What gave you the idea to open a winery in Novato?

I started making wine as a home winemaker 25 years ago. I worked for Allied Domecq Wines, USA. This was the largest wine company at the time with wineries such as Clos du Bois, Gary Farrell, Mumm Napa and may others. Liz and I decided about seven years ago to have an urban winery in a downtown setting. Not a wine bar but a place for people to relax after a day’s work with a glass of wine.

It’s family-run. My son, Michael and daughter, Hannah work here when on break from college. We also wanted the facility to serve as a local venue providing weekly entertainment including music and stand-up comedy, as well as a space for private corporate events, parties and fundraisers.

You don’t actually grow the grapes. Who is your grape supplier? Where are they grown?

Our grapes come from some of the best growers in Northern California. Each area produces its signature varietal and we purchase grapes that are highlighted from those specific areas. Such as zinfandel cabernet and cabernet franc syrah from Dry Creek Valley, pinot noir and chardonnay from the Russian River, Napa Valley cabernet sauvignon, sangiovese and syrah from the Sierra Foothills and a few others.

You won the Pacific Sun’s 2014 Best of Marin category for Best Local Winery. What is your favorite wine to recommend to new wine enthusiasts?

Syrah, cabernet franc and grenache. Like most of the Trek Wines these wines are full-bodied and everyone seems to enjoy them.

Ask Annie what her favorite wine is at [email protected].

Mention this interview and receive 15 percent off a bottle of Trek Wine for the month of December!