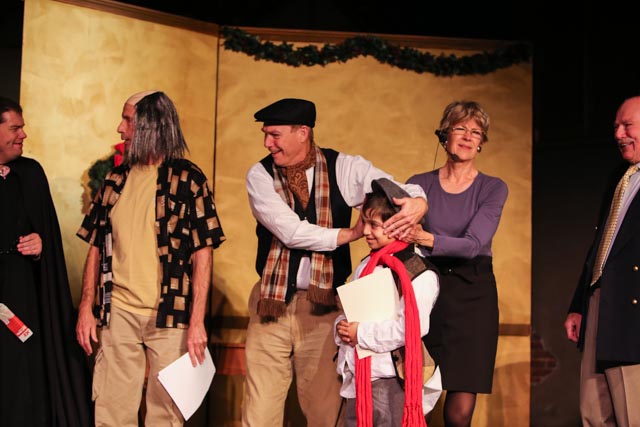 A holiday theater round-up: ‘The Complete History of Comedy (abridged)’ and ‘Inspecting Carol’

To celebrate the holidays and generate a little extra cash from performance spaces that otherwise would remain dark, theater companies often schedule special productions that lean more toward family-friendly entertainment than their regular season list. The favorite, of course, is the classic stage adaptation of Charles Dickens’ A Christmas Carol, which offers an unbeatable combination of memorable characters, an engaging story and a colorful 19th century London setting. Still, producers who have grown weary of Scrooges, Christmas ghosts, Tiny Tims, and the “whole damn Cratchit clan” (as they were once described to me)—or who worry that their audience would prefer a wider choice—often are tempted to experiment with alternatives. Here’s a brief look at two such ventures currently playing at Marin venues.

The Complete History of Comedy (abridged), Marin Theatre Company: One might think that making fun of the things that have caused people to laugh over the centuries would be a slam dunk. One would be wrong. It’s like squeezing an orange the second time around. There’s no juice left. The original comic force has already been spent.

So it is with this attempt by the Reduced Shakespeare Company to journey through 2,000-plus years of comedy in roughly two hours on MTC’s Mill Valley stage. Not that the creative team of Reed Martin and Austin Tichenor, supplemented here by Dominic Conti, are inexperienced at these mach speed journeys that rely on nonstop physicality and a sharp sense of the absurd to puncture the solemn veneer of cultural icons. They, their predecessors and licensees, have been doing it in this country and abroad with great success ever since the company was born in 1981 amidst the joyful chaos of Marin’s late, deeply lamented Renaissance Pleasure Faire. Lampooned subjects have included the entire Shakespeare canon, American history, the Bible, sports and a number of other worthy targets.

Comedy, however, is a different animal. No matter how hard this accomplished trio works to try to make a funny thing funnier (and you get the impression that they’re working very hard), it’s a losing proposition. Some of the 13 chapters of what they call “The Art of Comedy,” loosely modeled after the ancient Chinese classic, The Art of War, by Sun Tzu (punned here as “Ah Choo”—ouch!) succeed precisely because their subjects were not originally intended to elicit laughter. A parody of the current U.S. Supreme Court, using large puppets to portray the justices, is one such, but an evening that begins with a promising cascade of chuckles and groans gradually settles into that most dreaded enemy of comedy: silence.

Inspecting Carol, Novato Theater Company: A small professional nonprofit theater company that has seen its quality slide amidst financial problems and internal dysfunction, is pinning its hopes for a better future on a reimagined multi-cultural production of A Christmas Carol. A few weeks before Opening Night, the National Endowment for the Arts, which had cancelled the company’s annual grant, gives notice that it will be sending a representative to assess the group’s artistic progress. Can the producers rally the troops for what may be a life or death visitation?

Collaboratively developed in 1991 at the Seattle Repertory Theatre as a substitute for classic Dickens, Inspecting Carol has enjoyed limited popularity because of its insider focus. The first act in particular, centering on rehearsal problems, financial issues and other matters that don’t necessarily resonate with a general audience, is a difficult slog. Under the guidance of director James Nelson, things liven up after intermission as two of the production’s most effective actors—Chuck Isen as Scrooge and Milt Jordan, Jr. as an African-American Marley—team up for some nicely-rendered scenes. Good as they are, this taste of the original only raises the hope that some local group next year will gift us with an inspired version of the real thing.

Charles can be reached at [email protected].

Guide Dogs for the Blind