Zen and the Art of Pt. Reyes Station 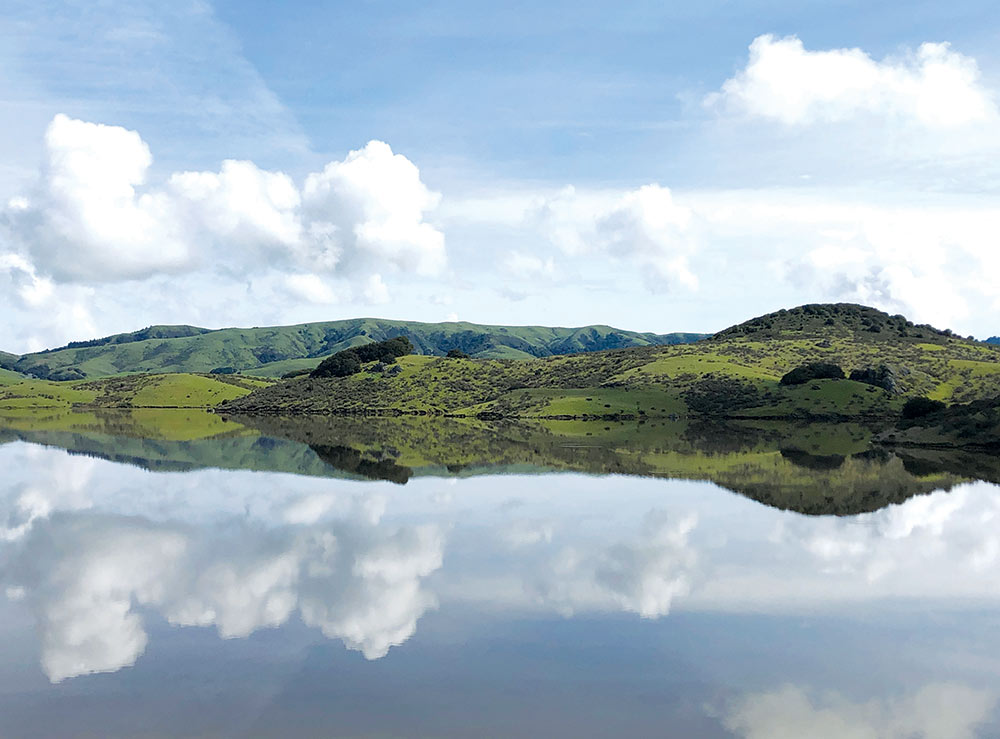 If there is a place that better blends agricultural heritage with a literate, urbane sensibility than Point Reyes Station and environs, then I haven’t found it.

First stop? Philip K. Dick’s former house, a kind of pilgrimage for me, as Dick’s one of my favorite writers. The science-fiction legend famously lived in town for a few years in the late 1950s and early 1960s. Typing away in his kitchen, he wrote numerous short stories and his novel, The Man in the High Castle, winner of the Hugo Award in 1963 and subject of a recent Amazon series. I stood in front of the house awhile. The “Face of God” that Phil claimed to see in his Pt. Reyes backyard was nowhere to be found—I checked—but the long-awaited pilgrimage to his iconic house was complete. I headed over to Ink.Paper.Plate for a chat with Sirima Sataman.

The Artist At Work

Sataman’s had a lot going on over the past couple of years. She’s had a show at the Bolinas Museum. And the Saltwater Oyster Depot in Inverness displays her prints, which brings more visitors to the multi-functional workspace, teaching space, retail outlet and community gathering space that is Ink.Paper.Plate.

Sataman’s story has many twists and turns. She studied printing, weaving, and sculpture in college, but a more “serious” career got its hooks in her after graduation and she spent years working an office job. “The universe kicked me out of my old career,” she says. Her son was fully grown by then and she was debt-free, so Sataman decided to roll the proverbial dice and become a full-time artist. She found the storefront that would become Ink.Paper.Plate and took up residence in Bolinas.

The largest pieces on the walls are all Sataman’s, but the workshop also displays prints by other artists and students. One wall features more than a dozen small posters for West Marin bands like The Haggards—all produced by local musicians who learned the craft from her.

If you’re not familiar, the old-time printmaking process is pretty cool. First, Sataman sketches an image on a thin piece of wood before carefully carving out the areas that won’t transfer ink to paper. Then she slathers the wood with black ink before subjecting wood and paper to extreme pressure to produce the image. Print runs can end suddenly when the wood plates shatter during the transfer. The paper, too, must be especially thick to survive the process.

Sataman had two plates on display at different stages. The first was a sketch of the Point Reyes Lighthouse with some carving already completed. Like the real lighthouse undergoing restoration and closed to the public, it’s a work in progress. The second was a well-used plate—the picture was of a local church— covered in dry ink. Although the plate looked worn, it still had some life in it for more prints. (Her art adorns the cover of the Pacific Sun this week.)

I left Sataman’s studio for some refreshment at the Old Western Saloon where the only customers on a Sunday afternoon are locals and motorcyclists Irishing up their coffee. The place smells of cigarette smoke, and the liquor bottles sport a thin layer of dust. Perfect. Enjoying a beer as you admire the photographs of Prince Charles’ 2005 visit hanging above the bar. Preserved in a glass case are his and Duchess Camilla’s pint glasses.

Like most of West Marin County on a Monday, it’s pretty quiet in Pt. Reyes as the work week gets going. Locals know this is the day to go grocery shopping, after the tourist-intense weekend has ended. I went to the Palace Market for a Marin Kombucha, oak-aged and flavored with apple and juniper. It tasted just like slightly sweet tea and I loved the brown-glass bottle, something straight out of an 1890’s snake oil salesman’s kit. Are you lacking vigor, young man? Then step right up!

After the oysters, the chowder, and the kombucha bacteria, I was still hungry. I ducked into the Station House Café and splurged on an order of fries and a cocktail. Around me were plenty of families with young children taking lunch. I marveled as the wait-staff managed the cacophony and chaos with friendly attentiveness. The Station House recently celebrated its 45th year in business and here’s to many more. It’s an institution.

The rain subsided in the afternoon and I walked down Main Street to Point Reyes Books, found the perfect book for a rainy day and headed for the recently rebranded and upgraded Olema House, whose location at the corner of Highway 1 and the Sir Francis Drake Boulevard makes the hotel the living gateway into Pt. Reyes National Seashore, with all its trails and hiking opportunities. There’s lots going on out here in coming weeks as spring gets rolling. The 10th annual Point Reyes Birding & Nature Festival takes flight on April 27, on the lawn adjacent to Cowgirl Creamery. Festivalgoers can meet a local owl and a local hawk. The bird event also features all sorts of family-friendly activities—coloring, face painting, and a youth bird walk. The Point Reyes Station Library is loaning bird backpacks to attendees that include binoculars, a bird diagram-book, and a local bird chart. Lucky kids. Then in June, the Pt. Reyes Farmer’s Market will be up and running in and around Toby’s Feed Barn on Saturdays through the summer. It’s said to be the first organic farmers’ market in the greater Bay Area—and was visited by Prince Charles and Lady Camilla back in 2005.

I arrived at Olema House for a press junket and was warmly welcomed by host Jan Vanderley at the front desk. He handed me a hot towel, which was welcome relief after all that cold wind and rain. He gave me a tour of the impeccable hotel, which features two dozen rooms, all with a unique theme, and all designed to denote a sense of luxury amid the rugged Point Reyes wilderness. I was in Room 16. The theme there was oyster shells and redwood accents to go along with a page of Kerouac’s On the Road hanging in the bathroom. I unslung my pack and settled in.

The air smelled heavily of cedar, here, a product of both the wood rails and daily fire in the lounge’s stone fireplace. As spring becomes summer, weddings and receptions come through here at a steady clip—2019’s pretty much all booked up—and even during the rainy season the hotel hosts a few corporate events every month.

The rain gave way as I looked out the window and then checked out Room 16’s third-floor balcony. I lit a fire (Olema House provides two Duraflame logs for visitors) and wrote for a few hours before dinner.

Due West is ext door to the hotel and I spent a while there sipping a martini and snacking on roasted almonds while listening to diners’ conversations. I ordered a tomato bisque paired with a light Chardonnay. The bisque was delicious and delicately sweetened with an undercurrent of carrot. I cursed myself for eating all those fries earlier in the day. I could have had a chocolate torte for dessert. Instead I settled into one of the softest beds I’ve ever slept on and broke open Ursula K. Le Guin’s Always Coming Home.

In coming months, Olema House and Due West will expand their culinary offerings with a new spring menu, and a newly renovated deli on the premises—Due West Market—that offer guests picnic baskets full of cheese, bread, wine, and other North Bay delicacies.

No Rush to Go Home

I awoke long before the alarm went off and stayed in bed through the morning and listened to the birds and occasional car driving by on Highway 1. Even out here, civilization makes itself known.

The complimentary breakfast in the lobby featured smoked salmon, sliced tomatoes, and cucumber. It reminded me of European hotel breakfasts, the effect enhanced by sitting near a young German couple. Outside, the fog was lifting. Near the rushing Bear Creek, a little girl played with her dog—the hotel Olema House can also provide bedding, food, and other amenities for guests’ four-legged friends, within reason. Leave the pet emu at home.

I lingered right until checkout time and then set out for the Great Beach, which spans 11 miles along Point Reyes’ western edge. Some sand between my toes would be the perfect way to end the trip . . .

But the road was flooded. I didn’t walk on sand, but the ride home was a delight. Black Mountain, the local massif and spirit guide, glowed emerald green, and guided me back to Petaluma. I might have even seen the face of God.

Tom Gogola went along for part of the ride.