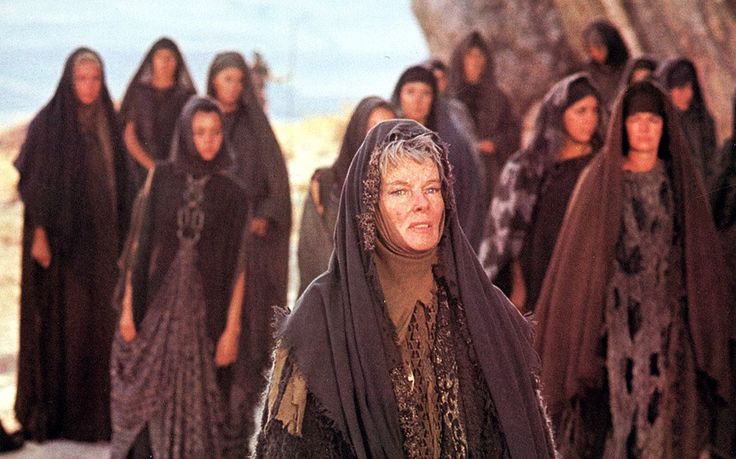 Video: The women of Troy

One of the very few pieces of music from ancient Greece to come down to us was penned by Euripides himself (the fragment can be found on YouTube), and heard in its unembellished simplicity it raises goosebumps–the sound is not of this world. Greek tragedy’s elusiveness and mystery-cult origins have always sat poorly with filmmakers who, looking back to the classics for character-driven engines of action and climax, find in Attic drama long passages of ritual swaying, trance-talk and that pesky chorus, with more than a trace of Eleusinian drug pumping through its veins. Michael Cacoyannis’ 1971 THE TROJAN WOMEN is a startling exception, a film that rings faithful to that long-ago religious feeling and shoots the viewer 2500 years back to Euripides’ world of magic and omnipresent threat. Cacoyannis pulled it off using four giants of cinema who were each capable of stealing the production out from under him–Katharine Hepburn, Vanessa Redgrave, Genevieve Bujold and Irene Papas–is its own miracle. Hepburn stars as Hecuba, wife of Priam and mother to the fallen Hector, who mourns with other widows below the walls of defeated Troy as the brutal and triumphant Greeks show up to ship them back into slavery and concubinage. Caged and under guard in sight of the women is the hated and defiant Helen (Papas), waiting her own fate at the arrival of jilted ex, Menelaus. The performances are a wonder to see. Available on DVD or, at this writing, in full on YouTube.