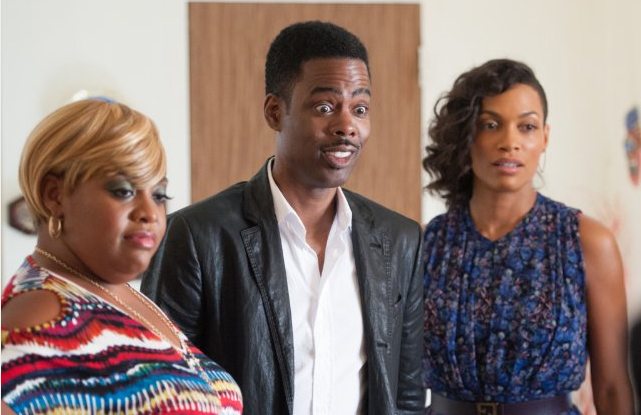 All great comics yearn to be taken seriously, and all funnyman careers all have their Oh Brother Where Art Thou

Chris Rock’s TOP FIVE fits the bill – ”It has more drama than any drama I’ve done,” he says in a Blu-ray extra – while remaining a very funny satire of the form, heartfelt and satisfying in the way Woody Allen’s films of the ’70s were. Credit Rock, the director, who calls on dozens of famous names to lend their improv talents, and his very canny script, which has the ring of truth about the tightrope walk that is a career in comedy. Rock plays faded superstar Andre Allen, trying to find new bearings in his fourth year of sobriety and making the publicity rounds for Uprize, his cheerless new film about the Haitian rebellion. Paired for the day with New York Times reporter Chelsea Brown (Rosario Dawson), he’s unsettled by her probing questions into his crossover success and soon-to-be marriage. The scrutiny couldn’t come at a worse time: Signs all point to the movie being a flop, his wedding with a reality star threatens to become the real joke, and everyone – from family to friends to fans in the street – keeps hounding him to make another Hammy the Bear movie. What’s an icon to do? In tone, the film hearkens to long-lost comedies like Richard Pryor’s Which Way is Up? – raunchy and relaxed and joyfully wrong in its politics, but with a heft that shows that Rock has never wandered too far from his Bed-Stuy roots. The message is a generous one: You are who you love, and no matter how big your personal success, you’re still just an amalgamation of your personal top-five.

Pacific Sun
The Pacific Sun publishes every Wednesday, delivering 21,000 copies to 520 locations throughout Marin County.
Previous articleUpfront: The future of Strawberry
Next articleHero and Zero: Yellow school buses and picnics at dog parks