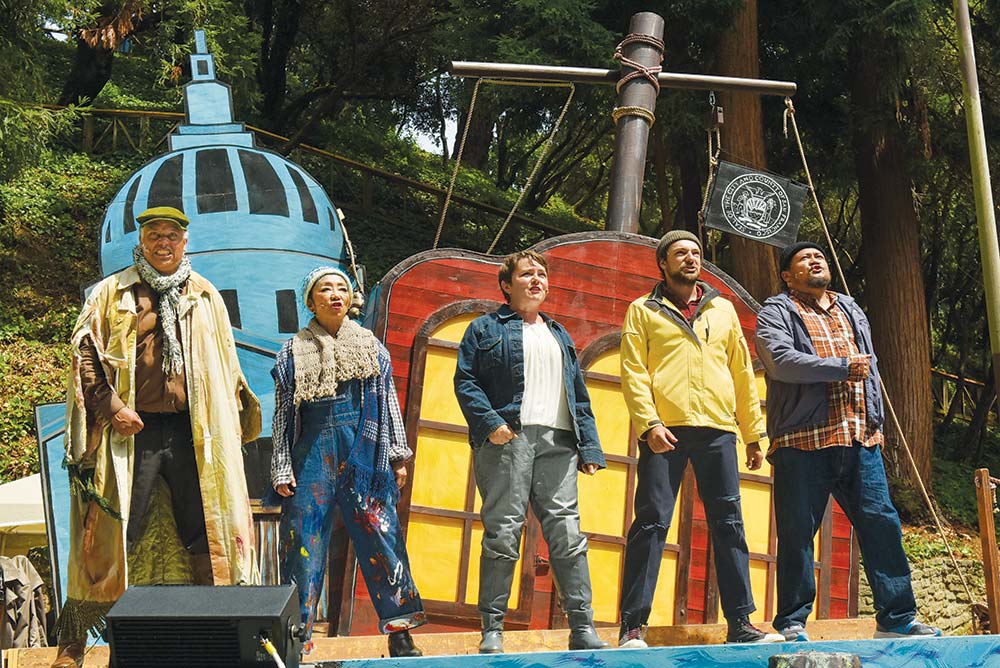 A piratical new travelling show from an iconic political theater company sails into the North Bay this season for a pair of provocative performances in public parks, spotlighting the “free” in freebooter while putting the “buck” back in buccaneer.

“It’s definitely a pirate show, with sword fights and sea shanties and everything,” explains Daniel Savio, the lyricist for “Treasure Island,” the currently touring musical by the legendary, Tony-Award-winning San Francisco Mime Troupe. Now celebrating its 60th year of politically- minded free theater, the troupe— – never actually a mime company, but more of a satirical, musical comic ensemble— – takes the title of its new show from the actual Treasure Island in San Francisco Bay. The play, written by Michael Gene Sullivan and directed by Wilma Bonet, will be presented on Sunday, Aug. 25, at the Plaza in Cotati, and Thursday, Sept. 5, at the Mill Valley Community Center.

“In addition to having pirates in it,” allows Savio allows, “the show is actually about modern- day developers and corporate greed, and how cities consistently force the poor and people of color into the worst, most dangerous places to live.”

The story follows Jill Hawkins, a city planner with big dreams, as she falls in with a band of sea-dog developers who’ve set their sights on turning Treasure Island into condos for rich people. And yes, there’s a mysterious, one-legged developer with a secret agenda. Oh, and they all sing, which is where Savio— – the son of the famed free- speech activist Mario Savio— – comes in.

“The songs,” he says, “with music by Michael Bello, do recognizably call to mind established ideas of what pirate music might sound like, but they also create a newer, more modern take on what pirate songs are. Or should I say, Arrrrr?”

As the scion of politically astute activists, Savio, 39, definitely grew up with some awareness of the San Francisco Mime Troupe.

“My parents absolutely took me to Mime Troupe shows,” he recalls, though he never imagined he’d become a creative partner of the troupe until about 12 years ago, when he was tapped to fill in for the keyboardist for a couple of shows during the tour of a musical called “Godfellas.” The following year, he played the entire summer tour, but did not work with the Mime Troupe again for over a decade.

“Then, in 2014, I started performing with the Mime Troupe again, and have done it every summer since,” Savio says. “But this marks my first year on the writing team, as well as touring with the troupe and performing in the band.”

According to Savio, the Mime Troupe performs two kinds of shows— – the ‘call to action’ shows, and the ‘sharing information’ shows, which attempting to explain something the audience may not know about.

“’Treasure Island,’” he says, “is more along those lines, the latter type of show. And it’s a total blast.”—David Templeton