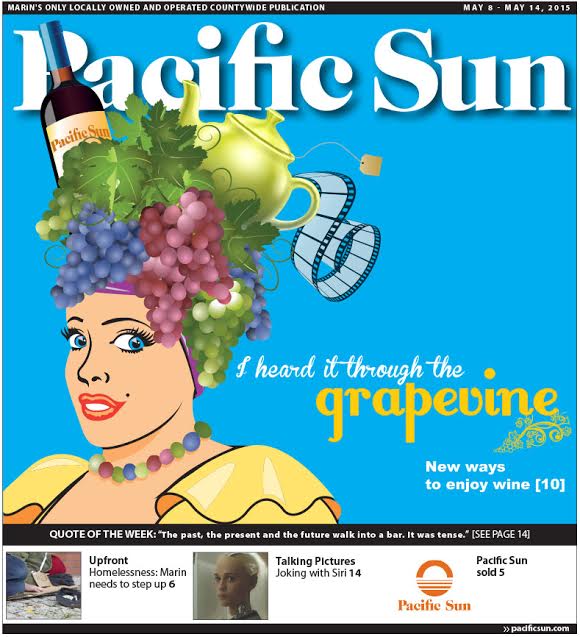 In this week’s issue of the Pacific Sun, publisher Bob Heinen let’s his big secret slip: He has sold the newspaper to Metro Newspapers. With four alternative weeklies, three community weeklies and a monthly magazine, editorially driven Metro currently reaches half a million Bay Area residents. Exciting things ahead for the Sun! After you catch your breath from that one, check out our three small features, which explore new ways to enjoy wine: Tanya Henry reports on the businesses that are using byproducts of the wine industry to create delicious treats, David Templeton explores the Wine & Film series at the Rafael and Richard Hinkle talks zin-mania. Peter Seidman fills us in on a recent grand jury report that calls on the Board of Supervisors to step up and meet the challenges of homelessness in the county, and David Templeton has a conversation about robots and aliens with Siri. Steve Heilig writes about Wavy Gravy’s upcoming 79th Birthday bash, which will feature popular bands and benefit the Seva Foundation. All that and more online and on stands today.

Pacific Sun
The Pacific Sun publishes every Wednesday, delivering 21,000 copies to 520 locations throughout Marin County.
Previous articleTrivia: Give the two-word name for these objects, which are increasingly being banned from public gatherings and music festivals.
Next articleTalking Pictures: Let’s get Sirious