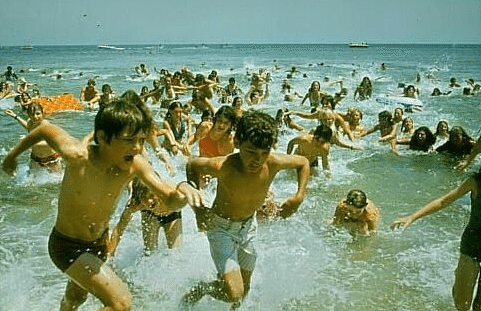 Friday, May 8 Scream A knife-wielding killer targets attractive, clear-skinned high school students with expensive cars and unlimited wardrobe budgets. This is one of those rare circumstances in adolescence where being poor and having acne is an advantage. (1996) Fox. 8pm.

Caddyshack A brilliant study in class consciousness is played out in a series of poignant vignettes set at a posh country club with dozens of characters interacting in an Altman-esque story of lingering societal divisions. (1980) VH1. 9pm.

Saturday, May 9 Lord of the Rings Marathon This is all three films in a row. Watch all nine hours in a row and you get a free pair of elf shoes and a chair dedicated to you at the school cafeteria dork table. TNT. Noon.

Sunday, May 10 What Happens in Vegas This movie, with Cameron Diaz and Ashton Kutcher playing strangers who get drunkenly married on a bender in the gambling town, gets its title from the marketing slogan, “What happens in Vegas, stays in Vegas.” The city stopped using the line when the health department made them add, “Except the herpes.” (2008) Lifetime. 6pm.

The Parent Trap This is the Lindsay Lohan version. So it’s still twins raised separately exchanging lives to meet the parent they never knew, but instead of meeting at summer camp, they meet in rehab. (1998) Disney Channel. 7pm.

Coyote Ugly A leggy young songwriter takes a job at a bar, dancing suggestively on the bar in revealing outfits. Apparently, the bar was designed to appeal to men too shy to go to real strip clubs. (2000) Starz. 10pm.

Monday, May 11 How to Build a Better Boy A pair of tech-obsessed teenage girls attempts to build the perfect boyfriend. We thought Hitachi already made one. (2014) Disney Channel. 6:45pm.

Star Trek This is the reboot, with the young, attractive cast. They still boldly go where no man has gone before, but they stop at the gym and the hair salon on the way there. (2009) FX. 8pm.

Tuesday, May 12 Finding Nemo An overprotective father goes on an ocean-spanning quest to find his son. The mother of course, is killed in the first few minutes. The so-called “Bambi Factor” is mandated by law in all anthropomorphic products from the Disney conglomerate. (2003) Disney Channel. 6:45pm.

Mr. and Mrs. Smith Brad Pitt and Angelina Jolie play married assassins who discover that they have been contracted to kill each other. We’d recommend counseling, and Kevlar. (2005). FX. 8pm.

Agents of S.H.I.E.L.D. In the season finale, the team is sent to track down the columnists who gave Age of Ultron bad reviews. ABC. 9pm.

Wednesday, May 13 Guardians of the Galaxy Possibly the best-talking raccoon in science fiction since Chewbacca. (2014) Starz. 6:55pm.

American Idol Another winner is declared. Now they have enough to fill a whole wing at the rehab facility. Fox. 8pm.

Thursday, May 14 The Road Warrior In a dusty desert world where gasoline is paid for in blood, a desperate battle is waged over a prized petroleum cache in a film that more or less sums up American foreign policy for the past 40 years. (1981) Spike. 7pm.

Wayward Pines A Secret Service agent wakes up in a small town after a car crash and discovers the residents working mysteriously to keep him from leaving. It’s some kind of conspiracy—and not the meth addiction and lack of education that keeps most people in small towns. Fox. 9pm.

Party Down South It’s a reality show. It only sounds like a euphemism. CMT. 9pm.