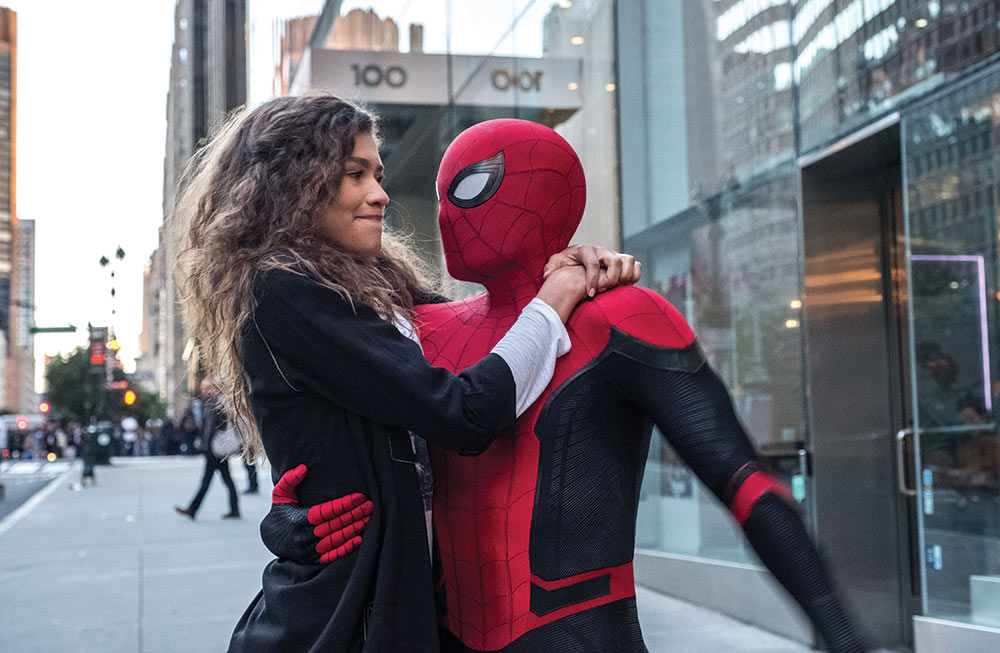 It’s not yet July 4th, and audiences can already experience Summer Movie Leakage. Spider-Man: Far From Home commences with Nick Fury (Samuel L. Jackson) and Agent Maria Hill (Cobie Smulders) examining a trashed Mexican village. Is this the same town Rodan took apart in Godzilla, King of Monsters? In fact, a windstorm is the culprit: “The cyclone had a face,” Fury rumbles. The giant wind beast returns and coalesces like a thunderhead, and out of the sky comes … a guy named Quentin Beck, aka Mysterio (Jake Gyllenhaal), a flying superman in a glass helmet, a denizen of a parallel Earth come to save our own.

Prior to the release of Spider-Man: Far From Home, it was considered a spoiler to name the deceased hero who went to his reward in Avengers: Endgame—the second most popular film of all time. Anyway, his loss hangs heavy over the film, and memorials abound. None are clumsier than the opening, a high school video tribute with flickering candles and Whitney Houston’s “I Will Always Love You” ululating in the background.

Following the loss of his knight, the squire Peter Parker (the eager and charming Tom Holland) longs to be the 16-year-old neighborhood hero he once was, instead of an Avenger. It being summer, he’s slated for a school vacation in Europe’s most decorative capitals. This gives him a chance to court the brown-eyed and diffident MJ, but his comic relief-buddy Ned (Jacob Batalon) advises him to play the field: “We’re American bachelors!” Familiar teenage summer vacation-stuff ensues in the European canals and castles, with Curb Your Enthusiasm’s J.B. Smoove and Martin Starr as the inept chaperones. Parker draws the attention of new good-cop (Jon Favreau’s Happy Hogan) and bad-cop (naturally, Samuel L.) mentors, and it’s off to Venice, Prague and London, where each city is besieged by an uninspiring kaiju that must be wrestled into submission by Spider-Man’s new fishbowl-headed pal from the multiverse.

Would that the big plot twist arrived just in time, like Spider-Man himself. Long-time students of the lore will see it coming (though it’d be fun to watch the amazement of a nearby child). The movie finally gets an infusion of gusto when Spider-Man gets caught in a new kind of fight. He’s psyched out, boggled by illusions, forced through a horror-maze of guilt and anxieties and given an unexpected goodbye kiss … from a Thalys train travelling at 200 mph.

This movie is full of things that don’t get the emphasis they deserve. We hear how Aunt May (Marisa Tomei) rematerialized after Thanos’ Snap, into the middle of what sounds like a bedroom farce. She describes the scene awkwardly at a public meeting, instead of letting us see it staged. We could have had a few more minutes with the ever-lissome Tomei.

As MJ, Zendaya gives a good impression of miffed, off-kilter appeal. She uses the defense of a good offense, which is the shield of every pretty and intelligent 16-year-old. But the dialogue reiterates the best moments of Spider-Man: Homecoming. She should have more eye rolls and less talk. To be fair, she endures nothing like the making over of the odd girl Ally Sheedy in The Breakfast Club.

Spider-Man: Far From Home gives MJ more agency during a final careen through Manhattan. It’s not a typical ride on a superhero’s powerful shoulder, as it was in 2002, but a terrifying trip MJ vows never to do again. To his credit, director Jon Watts takes the odd route whenever possible; he basks in the fun of hanging with teen pedants smart enough to tell a spear from a halberd. Sometimes it seems Watts has an altar somewhere with a DVD collection of Freaks and Geeks on it surrounded by candles and incense. Still, there’s relevance to burn in Spider-Man: Far From Home’s payoff in villainy; relevance in the distraction and deep fakery—with arsonists playing firemen—and in the smoke and mirrors.

‘Spider-Man: Far From Home’ is playing in wide release.