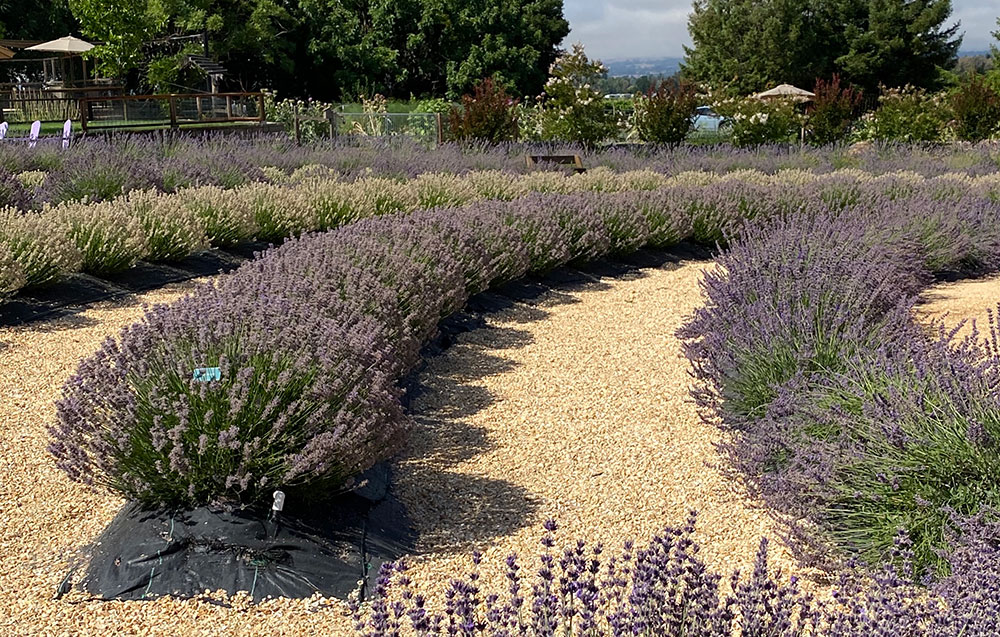 This week marks the 34th anniversary of the theatrical release of the David Bowie star vehicle Labyrinth. How better to commemorate the moment than by visiting Santa Rosa’s own local labyrinth and who better to send than a man whose namesake designed the labyrinth of classical mythology?

Bees N Blooms, located on Petaluma Hill Road at the base of Taylor Mountain Park, is an 11-acre, certified organic farm that produces lavender and a variety of lavender products, from honey and wax from 10 colonies of honey bees, to cut flowers for arrangements, and pollinator-friendly plants and trees. It also has a labyrinth made of the bright purple aromatic plant.

“We were searching for a crop that was drought tolerant and good for the pollinators,” says Susan Kegley, who purchased the land and moved to Santa Rosa from Berkeley with her husband Geoff in 2016. Originally, the acreage was a hay field heavily grazed by cattle, which degraded the soil—but it was also a “blank canvas” for the Kegleys, who are avid gardeners. Soon after, Geoff suggested lavender as their crop-of-choice, and the notion to create a labyrinth from the genus followed.

“Were just kind of kidding with each other to start with, but I started looking around for designs and found a great design that we could do here and then we just decided to do it,” says Kegley.

Their design is a modification of the labyrinth set into the floor stones of Chartres Cathedral in France. Instead of winding into a center with space for little more than a single person (the original design is thought to represent the solo experience of a religious pilgrimage), the Kegleys’ labyrinth leads to a spacious lawn. Once reached, the space can be used for events like weddings, corporate outings or even croquet.

“We needed something that we could do with a backhoe,” Kegley says, pointing to the comfortably wide pathways within seven circles of lavender, each a different variety. All told, the  half-mile labyrinth contains more than 900 lavender plants.

Besides creating a pollinator heaven the Kegleys wanted to do “something that would be a good spot for the humans, too.”

As advocates of sustainable and regenerative agriculture, the entire farm is in service to a diverse collection of pollinator and bird-friendly crops as well as a habitat for local wildlife, the aforementioned humans and the biosphere-at-large. In short, the Kegleys are stewards of the land—an apt next chapter following Susan’s’s previous career. She holds a Ph.D. in chemistry and founded the Pesticide Research Institute.

“I was doing work on pesticides and pollinators and had a research project going with commercial beekeepers, following them throughout the year, looking at different things that might be affecting their hives and impairing their performance and killing them off,” she recalls.

She became a beekeeper, in part, to evaluate the scientific studies and the regulatory studies that the Environmental Protection Agency was doing on pesticides.

“It’s really easy to skew the results of a test,” says Kegley, who found herself smitten with the insect. “It’s fascinating and the bees continue to teach you something no matter how long you’ve been doing it. It’s just a source of continual wonder.”

As is the labyrinth—if this reporter wasn’t allowed to use a shortcut, he’d still be in it.

The public is invited to come harvest the lavender that comprises the labyrinth beginning this week as part of a “U-Cut Lavender experience.” Covid-19 protection protocols will be observed (masks, social-distancing, etc.). The experience is available during regular hours July 3, 5, 10, and 12. Reservations must be made online at beesnblooms.com.