Thousands of North Bay restaurants and small businesses facing reduced hours or full closures during the coronavirus lockdown now find insurance, their one common avenue for support, closed off, as the insurance industry faces an unprecedented rush of claims.

So far, the industry says they won’t cover many, if any, of the business claims, citing the fact that many policies specifically exclude virus-related costs.

Still, there is a glimmer of hope. Many North Bay business owners are keeping their eyes on a lawsuit filed in the California Superior Court of Napa County last week which they hope could open a legal avenue for thousands of other small businesses to file claims.

The lawsuit, brought by Thomas Keller Restaurant Group, owner of a dozen high-end establishments including The French Laundry in Yountville and Per Se in New York City, will determine whether the company’s insurance policy will cover coronavirus-related costs.

“To avoid payments for a civil authority shut down the insurance industry is pushing out deceptive propaganda that the virus does not cause a dangerous condition to property,” Keller’s attorney John Houghtaling said in a press statement last week. “This is a lie, it’s untrue factually and legally. The insurance industry is pushing this out to governments and to their agents to deceive policyholders about the coverage they owe.”

North Bay restaurant owners and hoteliers are watching Keller’s lawsuit hopefully. Unlike Keller, most business owners are unable to afford an attorney to wage a long-term, expensive fight with an insurance company.

“I don’t have the deep pockets [Keller] does, but it would be good to see a legal precedent on this issue,” said Marco Palmieri, the owner of Petaluma’s Risibisi restaurant, on Monday.

Like many restaurants, Risibisi is currently open for pick-up and deliveries and operating with a “skeleton crew.”

Palmieri is trying to keep the restaurant open for as long as he can. But, if the shelter-in-place order continues and take-out orders begin to drop off, Palmieri says he may have to stop the restaurant’s current limited service and close shop completely.

Although most business-interruption policies usually cover closures due to fire and water damage, pandemics are specifically excluded from many policies, according to the California Department of Insurance.

Many contracts include a stipulation like this: “We will not pay for loss or damage caused by or resulting from any virus, bacterium or other microorganism that induces or is capable of inducing physical distress, illness, or disease.”

Now, faced with millions of claims, the industry is also fighting calls for intervention by federal lawmakers. The American Property Casualty Insurance Association (APCIA) laid out the industry’s argument against calls for lawmakers to force insurance companies to retroactively cover virus-related damages in a press release last week.

“For perspective, our industry responded to more than three million claims, the most ever handled by the property casualty industry due to catastrophes during the 2005 hurricane season that included Hurricanes Katrina, Rita, Wilma, and several others,” the APCIA release states. During the coronavirus crisis, the industry could see as many as 30 million claims, APCIA argues.

Still, some local business owners say they have been advised to file insurance claims even though they expect to be turned down.

“It will likely get rejected, but should these virus rules get overturned, I wanted to be on record as having filed,” Larry and Pam Willis, the owners of The Gables Wine Country Inn in Santa Rosa, told the Bohemian. “Months down the road, I don’t want to be rejected because of having never reported the issue.”

Without insurance money, most restaurants and small businesses will turn to the federal government for assistance to stay afloat.

Under the stimulus package signed last Friday, the Small Business Administration (SBA) is providing grants and loans to small businesses to incentivize them to keep their employees on the payroll during the crisis.

Through its new Paycheck Protection Program, the SBA will distribute $350 billion to small businesses around the country.

If owners spend the money on the right things—keeping employees on the payroll, rent payments and utilities—the loans will be forgiven.

“You’d be a fool not to apply,” Risibisi-owner Palmieri says. 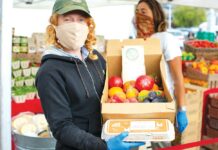