Scanning the bountiful county for food news you can use 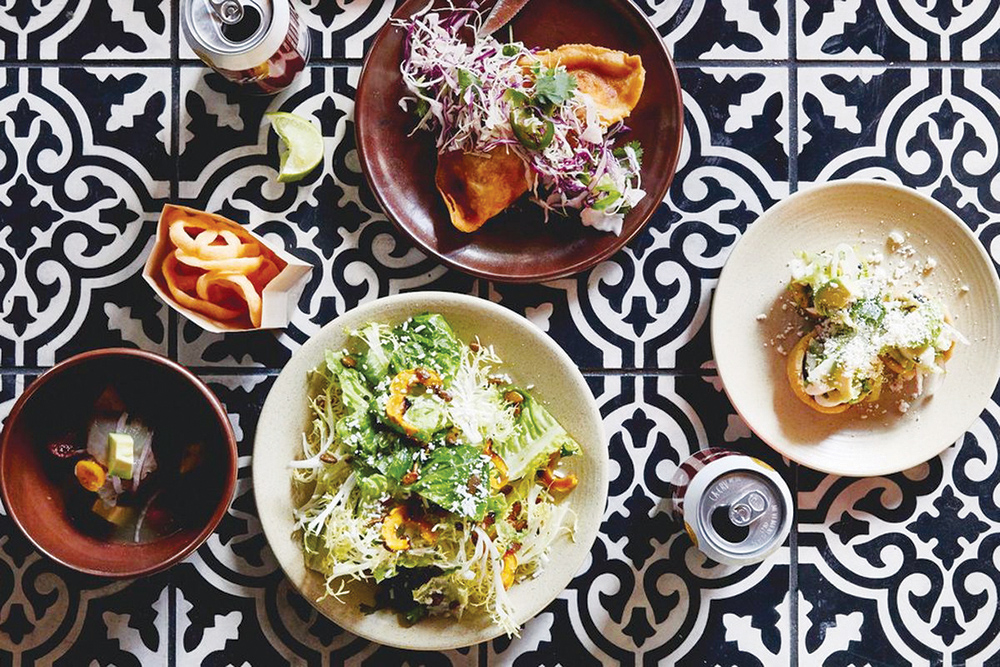 Flores, San Francisco’s estimable Mexican restaurant, opens its new outpost in the Corte Madera Town Center on Oct. 29. Yummers. The restaurant prides itself on tortillas made by hand daily out of fresh masa, and the menu bespeaks a sensibility geared toward traditional Mexican food. Tortillas are served with entrées that include a mole negro poblano, duck-confit enchiladas and citrus-roasted pork shoulder.

Executive chef Luis Flores—it’s a family affair, this restaurant—is a longtime Marin County resident and says in a statement that the tortillas are the thing: “We get our corn from local farmers and grind it into masa every morning, so it really is a local farm-to-table process.”

Other menu standouts that catch our eye include crab tostados and a whole roasted fish—not to mention a slew of swank and contemporary beverages that include mezcal margaritas. And, hey, if you’re reading this on Oct. 24, know that there’s a soft opening at Flores for dinner service only. Regular hours kick in on the 29th, when this Marin newcomer will be open seven days a week for lunch and dinner. There’s talk of a brunch menu being offered as of Nov. 17. Stay tuned for more on that.

West Marin locals have been hitting the social media pretty hard wondering what’s going on with the popular Sand Dollar restaurant in Stinson Beach. The restaurant is closed to replace a septic system, according to the Sand Dollar website. Our source-in-the-know says it won’t reopen until next spring.

That’s a drag. Local residents recall how, back in 2008, the Sand Dollar was a go-to place for locals who wanted a place to celebrate the election of Barack Obama—and folks were jabbering on Next Door this week about whether he place will open on the night of Nov. 6, come hell or high water (high water is more typical in Stinson, which flooded badly last winter).  Every indication we’re getting is that the Sand Dollar’s down for the count until spring—but there are plenty of other places to fret over the election results come next Tuesday. Our election-night plans are in flux but depending on how thing go, may or may not include some tasty chocolate edibles and a relaxing walk on the beach.

The Mill Valley Market, in business for 90 years in Marin County, announced earlier this month that it had bought Vintage Wine & Spirits, located at 82 Throckmorton Ave., itself a thriving business for some 80 years. A statement announcing that the two long-standing businesses had merged noted that the sale will ensure that Vintage remains “one of only two independent fine wine and spirit shops in southern Marin, with origins dating back to shortly after Prohibition.” The Mill Valley Market Farm is located in Glen Ellen and delivers fresh produce to the market daily.

Well, World Vegan Day is coming up on Nov. 1, and the researchers at the personal-finance website WalletHub have run the numbers: the average person can save up to $750 a year by skipping meat. The researchers at WalletHub also figured out the best U.S. cities for vegetarians and vegans, and San Francisco came in fifth on that list, after New York City, Portland Ore., Orlando, Fla., and Seattle. The big town to the south benefits mightily from a robust regional agricultural economy, which translates into San Francisco having the most community supported agricultural programs per square foot of population. One of those is Eatwell, which offers food subscriptions and delivers to Marin County. Other San Francisco CSAs of interest to Marinites include Full Belly Farm and Greenhearts Family Farm, both of which deliver to the county.

I was talking recently with Jason Faircloth, owner-operator of the newish Splitrock Tap & Wheel, about his menu, and Faircloth noted that a new dish was on its way: the Vietnamese banh mi sandwich. I’ve been thinking about it ever since. I’m sort of obsessed with this sandwich—the crunchy bread, the fragrant cilantro, the tongue-tickling hot sauce, the grilled meat—so I went to the Split Rock online menu to see if it’s up there, with plans to pop in at some point between now and the end of Western Civilization as we know it, and grab that sammie.

Alas, the banh mi is not on the Splitrock online menu, but I found a couple of other wonderfully homey items that are sort of fun to contemplate in an idle and vaguely hungry manner, around lunchtime; i.e., the peanut butter and jelly sandwich, made with Skippy and strawberry jam. That’s a $4 pocket-rocket of quick energy for any bicyclist who happens to come through this cafe-cum-bike-shop in Fairfax. There’s also a $4 grilled-cheese sandwich made with American cheese—hopefully of the individual, plastic-wrapped Kraft variety. Sorry, that’s my suburban middle-class childhood speaking. What I meant to say was, hopefully of the organically rendered and locally sourced variety.

The Sustainable Enterprise Conference, to be held at the Embassy Suites in San Rafael on Oct. 25, is promoted as the biggest annual conference of its kind in Marin County, with 40 speakers, 35 exhibitors and 300 business and community leaders, and students—all gathered to chew the tofu over the many and varied  contours of sustainability. Speakers run the gamut from U.S. Rep. Jared Huffman to Autodesk Foundation executive director Joe Speicher. The daylong confab is sponsored by the co-working space VenturePad (the Pacific Sun rents space at VenturePad), and of course they’ll be talking about food; among the numerous topics that hit on sustainability is a planned afternoon session on sustainable agriculture and food systems, wellness and food equity. The event runs from 8am until a 5–7pm reception. Tickets are available up to the day of the event, and they’re promising all sorts of local foods for breakfast, lunch and the reception. Sign us up! Register at https://greenmarin.biz.