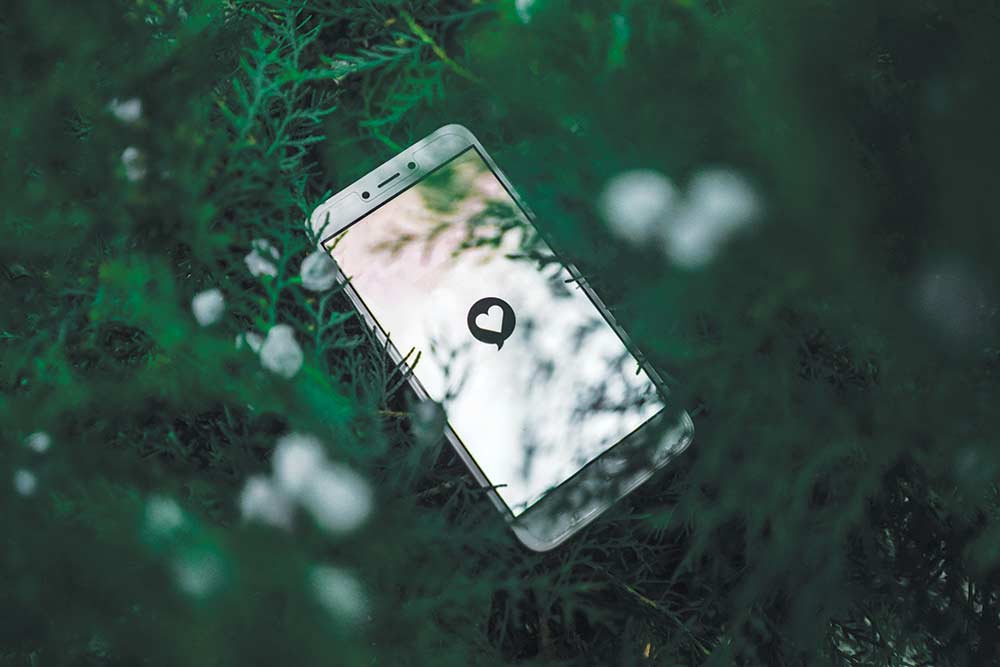 Love in the time of apps and angst

My husband and I have been married for 27 years, and for most of that time we have lived on a quiet street in a quiet neighborhood. All but one of our four kids flew the SoCo coop to L.A., where they struggle to find their feet, slogging through the existential goo of late capitalism, creative saturation and infrastructure decay to eek out a living among the masses as musicians and artists. Life has become for them, like many millennials and Gen Z-ers, an exhausting grind of self-curation; day by day, the tinsel tarnishes.

Few of their friends are in relationships, either because they haven’t met someone or can’t afford to date. I have little in the way of advice for them. After all, I came of age during the Cold War, an early arrival of Gen X. The year I went to college we still had a rotary-dial phone and rabbit ears on our TV set. Gas was 62 cents a gallon.

To understand the romantic zeitgeist of my teenage years, one need not look further than ABC’s 1982 hallucinatory synth-pop video “Look of Love” in which lead-singer Martin Fry, dressed like Harold Hill in heavy eyeliner, beckons two hand-clapping, lederhosen-clad party boys towards him as he holds a Hasselblad camera in his hands singing, “When the world is full of strange arrangements, and gravity can’t hold you down.”

Alas, I have now reached the age when Valentine’s Day is best celebrated with boxed cheesecake, a fork and Monty Don’s Great British Garden Revival. Nothing says romance like watching a Cambridge-educated gardener sow the runner beans and brew a homemade plant tonic from fermented nettle and comfrey, making the occasional guest appearance at some rural allotment to advise on cabbage white fly and powdery mildew.

All my husband and I ask of each other on Valentine’s Day is that we agree to ignore it. Romance is in the small daily acts of reciprocity—instead of long-stem roses, the gift of blooming Manzanita and quince on a winter walk, our rescue dogs, our chickens, the appreciation of another year on the good green Earth before it becomes Venus.

Admittedly, navigating romance in the 21st century requires a new set of skills, and I still have an iPhone 4. I tell my kids to cultivate their interests, to get outside and off-screen as much as possible and that love, like gardens, is cultivated from understanding, care and by nurturing the soil that sustains it. They tell me that I have no idea what I’m talking about, that gardening metaphors are both ridiculous and irrelevant for a generation of people priced out of both gardens and housing, and they’re #vanlife right.

The rules have all changed—marriage is out, gender fluidity and polyamory is in. Some argue that marriage is and has always been an economic arrangement, one intended to preserve an imbalance of power and autonomy between the sexes based on the historic fact that men would be the economic engine of the marriage and women the caretakers of the domestic sphere.

Welcome to the future.

In her book Against Love: A Polemic, provocateur-essayist Laura Kipnis writes, “We live in sexually interesting times, meaning a culture which manages to be simultaneously hypersexualized and to retain its Puritan underpinnings, in precisely equal proportions.”

The Atlantic and the Washington Post ran articles in recent years citing studies about how Americans are having less sex, a trend mostly driven by younger generations. In the age of SnapChat, fears about exposure during and after intimacy, the illusory online “you,” 24/7 availability through cell phones, and the proliferation of Internet predators, are really real. Yet love finds a way—even in February.

There are those who can and do offer professional relationship advice for singles, couples and throuples for navigating Valentine’s Day—for better or for worse.

For singles seeking connection, Alexis, from Tinder Plus, says to promote the “authentic version of yourself. If you pretend to be someone you’re not, you’ll attract someone who falls in love with the false version of you. Don’t be so afraid of rejection that you fake who you are.”

No news here. But in the age of a digital persona, even the authentic version of oneself is highly edited, enhanced and if we’re honest with ourselves, a little dishonest to others.

“Valentine’s Day doesn’t have to be just about romantic relationships,” says Viktor, a relationship expert for the website SocialPro. “Celebrate other important relationships by doing something enjoyable with those close to you. Surprise and variation are important ingredients in any healthy relationship.”

Be creative. Care about something bigger. Romance isn’t just for those with disposable incomes, and it costs nothing to spread the love.

“Saying and doing small, simple expressions of gratitude every day yields big rewards,” Alexis writes. “When people feel recognized as special and appreciated, they’re happier in that relationship and more motivated to make the relationship better and stronger.”

“The number one thing that I teach couples who want a sustaining, nourishing relationship is to regularly set time aside to do a ‘commitment ceremony,’” writes Marie from Marie Anna Winter Coaching. “Every deep relationship that we have deserves and needs attention and care, and a celebration of our commitment to the relationship.”

“Remember, practice always makes perfect,” Alexis says, about multiple-partner relationships. “The latter means that for you to be successful in this fetish, you will not only need to research but also have to ensure that you are willing to practice.”

“In my experience, the biggest challenge of people in throuples and less-normative relationships is an underlying fear of not being accepted by those around them,” she says. “This is true for most people who decide to live outside the societal norm—especially during times like Valentine’s Day. It’s important to understand that we create our happiness not by adhering to expectations but by living our lives just like we want to.”

Rilke wrote that, “the highest task of a bond between two people: [is] that each should stand guard over the solitude of the other. For, if it lies in the nature of indifference and of the crowd to recognize no solitude, then love and friendship are there for the purpose of continually providing the opportunity for solitude. And only those are the true sharings which rhythmically interrupt periods of deep isolation.”

Maybe Valentine’s Day, despite its largely forgotten historic origins and the tacky modern commercial hype, is a reminder that a warm, life-giving force stirs beneath the surface during the month of suicides. Perhaps it is a reminder to expand the human heart at the very moment when the bleakness seems eternal.