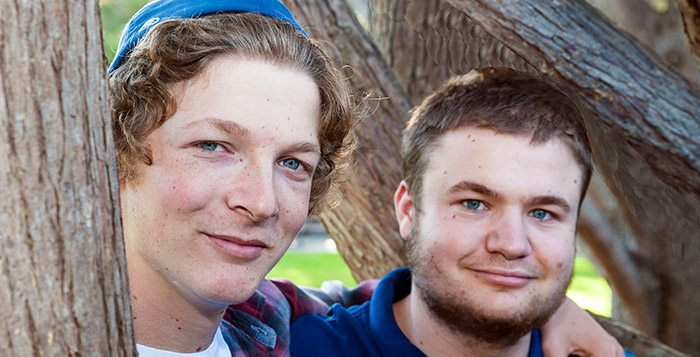 “Even at a young age I noticed that Connor didn’t have the same opportunities that I did,” says Tyler Barbee, speaking about his autistic older brother.

Many are of the mindset that age is but a number; Barbee, 17, has found a myriad of reasons to agree. When he was just 11, the Tam High senior founded a Marin Challenger baseball league—now known as the nonprofit Project Awareness and Special Sports (PAASS), a program that advocates for the inclusion of the special needs community in extracurricular activities and sports.

Barbee’s life appears to mirror that of his peers—he lives in Mill Valley with Connor and his parents, is an avid sports fan and is in the midst of the daunting task of applying to college. But it’s how Barbee spends his free time that sets him apart from his classmates and marked him as the Pacific Sun’s Heroes of Marin Rising Star.

“Baseball was always a big part of my life growing up,” Barbee says. “I had a community in baseball—all my friends played baseball. It’s where I hung out with everybody and it’s where I always wanted to be, but my brother didn’t really get that [chance].”

Connor, 21, was Barbee’s inspiration for PAASS.

“[People without special needs] are able to succeed outside of school, which gives us a lot of confidence in other aspects of our life and I just really wanted Connor to have that,” says Barbee, who turned his “grassroots” Challenger league into a nonprofit in September.

And so on a Sunday afternoon in 2008, Barbee assembled a group of friends and the very first Challenger baseball practice took place at Boyle Park in the heart of Mill Valley. Eventually the park gave up a time slot to Barbee and team on Sundays, which marked the beginning of a regular practicing season. Barbee, with the help of his mother, organized the first Challenger baseball, basketball and soccer leagues that paired special needs kids with student volunteers.

“The program started out with less than 20 players and one baseball team,” Barbee says. “[It] really only grew by word of mouth—that’s how we got most of our players and volunteers and now the program has essentially tripled in size.”

Practices start with the players pairing up with “buddies”—the volunteers—and transition into dribbling, playing catch and warming up. Next up: a group stretch and run, which is followed by drills led by coaches, and finally, a scrimmage. PAASS’ growth led to a variety of programs after its initial baseball game. Baseball is offered from March through June, soccer is offered from September through October and basketball is offered from January through March. The Challenger Division was established in 1989 as a branch off of Little League to offer boys and girls with special needs the opportunity to participate in extracurricular sports activities. Today, there are more than 900 Challenger Divisions worldwide with more than 30,000 participants. For PAASS, Barbee estimates that about 40 to 50 players participate in the programs each year.

Marin, Barbee says, is an incredible community—one that has been very inclusive of those with special needs, and a place that Barbee attributes much of PAASS’ success to. But challenges and hurdles were inevitable, especially when dealing with uncharted territory. Engaging a connection between buddies and players was a notable challenge, Barbee says.

“To most volunteers, coaching came naturally, but it still took time and effort to create a comfort level between buddies and players,” he says. “I think many volunteers were at first unsure of what to expect and many of the players were afraid of all of the new people around them. However, as soon as both sides felt comfortable with each other, it seemed as if they’d been working together for years.”

Barbee says that it’s the comfort and confidence-building that he finds to be most transformative and impactful for the players. The skill and drill development is secondary.

“Kids with special needs really develop a sense of self-confidence while participating in the program,” Barbee says. “These children have the opportunity to succeed through sports and develop strong friendships with their buddies. This confidence then translates [into] an ability to succeed in other aspects of [their] life.”

As for the program’s muse, Barbee says he’s seen a huge shift in Connor over the years, from participating in drills to leading the group stretches—Barbee was able to “push [Connor] to reach outside his comfort zone.” Connor recently finished a life skills program for people with special needs at the College of Marin and the Barbees are currently helping him find part-time work. And while Connor may not enjoy the social element of participating in PAASS in the same capacity of his yesteryears, he enjoys all-things photography, photographing PAASS practices and is a huge Star Wars buff. Barbee names his brother’s character as one of the greatest inspirations of his life.