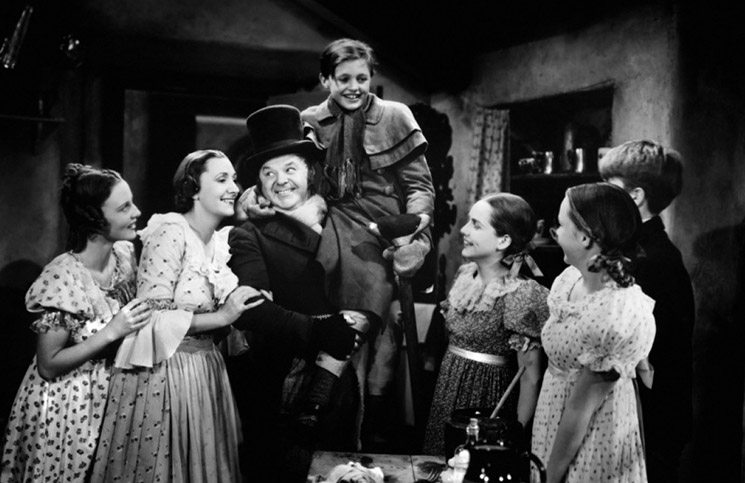 Talking Pictures: A Ghost of Dickens Past

“Why are you wearing those chains?”

A pair of small girls, visitors at the Great Dickens Christmas Fair, have just spied actor Tom Westlake, who plays the part of Jacob Marley’s ghost each year at the popular annual Dickens-inspired theater festival. Marley, as should be recalled by anyone who’s caught one of the dozens of movies inspired by Dickens’ A Christmas Carol—or perhaps actually read the book—will recognize Jacob Marley as the deceased partner of Ebenezer Scrooge, doomed to carry a vast chain through eternity, ever since dying, on Christmas Eve, having died a notoriously selfish businessman.Why are you wearing those chains?”

“What’s that chain?” one of the girls asks Westlake.

“It is the chain I forged in life,” he replies, mournfully.

“What do you do with it when you sleep?” the other asks.

Westlake, accustomed to getting unexpected questions, pauses a split-second before speaking the plain truth.

The next day, now divested of his ghostly raiment and back to being Tom Westlake, he laughs at the memory.

“I was a bit reluctant to say that, because they were very small children,” he admits, “but that is the bottom line.”

It’s the first line, actually, of A Christmas Carol.

“Marley was dead: to begin with. There is no doubt whatsoever about that. Old Marley was as dead as a doornail.”

The Dickens Fair (www.dickensfair.com), now in its 36th year, takes place at the Cow Palace, which is transformed into a series of streets in Victorian London at Christmas time. Milling about amongst the food and craft stalls are a small army of actors portraying various fictional characters from the works of Dickens and his contemporaries, with a few historical figures (Edgar Allan Poe, Charles Darwin, Ada Lovelace) thrown in for good measure.

Westlake, a longtime participant in the Dickens Faire, has played Jacob Marley for the last five years. Originally, Westlake was cast as the understudy—in the course of a five-week-long run, even fictional characters do get sick—but then circumstances handed him the role as the primary performer.

“It ended up being an understudy’s best dream come true,” he says, clearly happy to being portraying such an iconic figure. “To prepare for the role,” he says, “I did something a lot of actors don’t do. I went back to the source material. I actually read A Christmas Carol. Then I built my character based on that, but with an extrapolation taken from all of the cinematic variations.”

“There have been a lot of film adaptations over the years,” I mention. “The way they portray Jacob Marley veers away from the original book quite a bit, doesn’t it?”

“Yes. Yes they do,” Westlake affirms. “In the book, Marley carries an almost overwhelming sense of regret. One of his lines is, ‘I wear the chains I forged in life.’ He’s burdened down, now, with a sense of guilt for having been so mindless and thoughtless and selfish when he was alive. He was blind to the plight of his fellow man, and now he deeply regrets that choice.

“Dickens,” he goes on, “was writing from a very ‘liberal’ standpoint, making the case that we should all be much more aware that we are not alone in this world, that we share our lives with others. We are, or should be, social creatures. Unfortunately, we’ve forgotten that again in contemporary society, I believe, where so many are saying, ‘Every man for himself.’ In the book of A Christmas Carol, there is an overwhelming theme of generosity, a reminder that we really are happiest when we find a way to be mindful and more thoughtful of the people we share this planet with.”

“So, here’s a guy doomed to walk the planet alone and invisible, dragging this enormous, heavy chain,” I muse, “and his regret isn’t so much from the fact that he’s being punished, as that he missed the opportunity to actually help people? He’s a better man now that it’s too late to do anything about it.”

“Yes. There’s a line that Marley says …” Westlake pauses a bit, working to recall the line. “I’m sorry,” he apologizes gracefully. “The lines come more easily when I’m actually in costume. What he says is that he knows he should have wandered among his fellow man, spreading kindness, and now that he can’t, he can only witness what he can never share, moments he might have turned to happiness for himself and primarily for others.”

Occasionally, Westlake has discovered, a customer will stop and talk with him, asking questions. Many times, it turns out, people will have no idea who he is.

“Some people actually wish Marley a merry Christmas, as he stands there draped in chains. All I can do is look very sad and mournful. Because Marley would be sad at having been blind to the whole gestalt of the holiday season.”

When visitors persist, clearly having never encountered A Christmas Carol, Westlake has actually beckoned them to follow him to the nearby bookstall, placing a copy of Dickens’ novel in their hands.

A lifelong movie fan, however, Westlake knows that most people will have encountered the story in one of its many film versions, from the celebrated 1951 version starring Alastair Sim as Scrooge and Michael Hordern as Marley, up to 2009’s regrettable animated misfire featuring the voice of
Jim Carrey as Scrooge and Gary Oldman
as Marley.

“My favorite Marley, in films, comes from a different movie than my favorite Christmas Carol,” Westlake says. “One of my favorites, because I saw it during a formative year in my life, is the musical version from 1970. Albert Finney played Scrooge. The music is wonderful, and though a lot of purists don’t like it, it has a fantastic look to it. It really brings that world to life. Alec Guinness, of all people—Obi-Wan Kenobi—played Jacob Marley.”

“My favorite Marley,” he reveals, “which is to say, the actor who plays the most accurately according to the book, was Frank Finlay. That was in the George C. Scott version, the television movie. Frank Finlay is best known for playing one of the Three Musketeers in the Richard Lester movie of the 1970s.

“He played Marley as very, very sad,” Westlake continues. “Very, very mournful. When he appears, there’s some very heavy string music on the soundtrack. I think he brings the wounded, lost humanity of Marley to life better than anyone else on film.”

“As an actor who loves film and also loves Dickens’ writing,” I ask, “do you regret at all that so many people wouldn’t know Dickens’ stories at all if not for the films?”

“One of the philosophies that I have adopted,” Westlake replies, “is that there is no wrong way to learn. Everyone will have a different entry point to great literature. A lot of people got into classical music after hearing it in a Warner Brothers cartoon. Or they loved the theme to The Lone Ranger, and then learned it was a composition called The William Tell Overture and suddenly they want to hear it played live in a concert hall. I personally fell in love with classical music because of the way it was used in Stanley Kubrick’s 2001: A Space Odyssey.

“I feel the same way about the Dickens Fair,” he adds. “If someone turns on their T.V. and sees a version of A Christmas Carol, and says, ‘Hey, there’s that guy in chains I saw at the Dickens Fair, then perhaps, just perhaps, they’ll go pick up a copy of the book, and then they’ll find a whole new world opening up to them. It happens.

Ask David about his favorite version of ‘A Christmas Carol’ at [email protected].

Your AI Obit—Bots Get Final Word