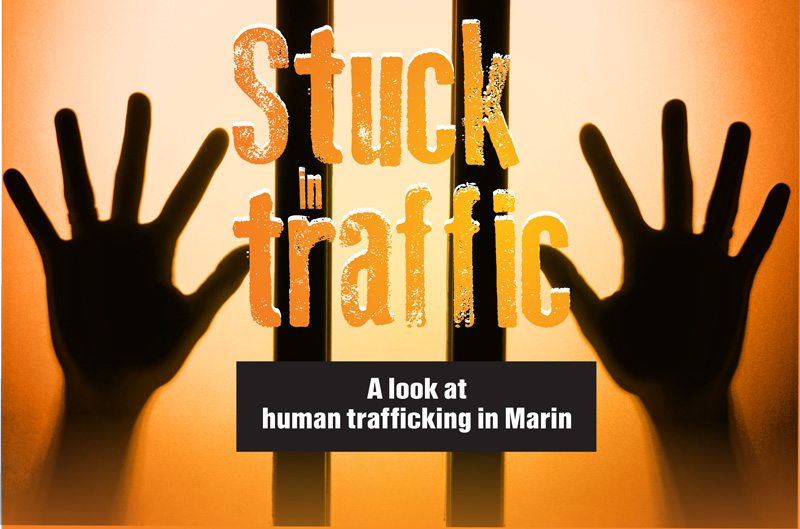 A look at human trafficking in Marin

Behind the lights and extravagance of the halftime shows, a dark side exists to any blockbuster sporting event like the Super Bowl, one of the biggest opportunities for human trafficking in the United States, according to a member of the Marin County Task Force on Human Trafficking.

Events like the Super Bowl—scheduled for the Bay Area in 2016—attract pimps and their prized commodity—under-aged children. High-profile events always draw large crowds and are lucrative opportunities for child prostitution criminal enterprises, the Task Force has found. In the past, these under-aged workers have ranged from 12-17 years old, according to Linda Witong, retired deputy district attorney and president of Soroptimist International of Marin County, an organization that supports women and girls and which is an official member of the Marin County Human Trafficking Task Force.

The children and teens are wooed into the life of prostitution from emergency shelters, group homes, bus stations, airports, hotel lobbies, abusive homes, shopping malls and largely through the Internet. They are often runaways, like the 15-year-old Sacramento girl who was found at the Villa Inn in San Rafael in mid-December in the company of Leevester Hall, or the 16-year-old runaway from Washington state, in the company of a 20-year-old woman, discovered in San Rafael on Dec. 23. They were booked on suspicion of trafficking a minor.

But to Witong, these cases are not unique. She relayed the story of a 12-year-old girl traveling by herself across the country. The taxi driver who picked her up alone at home didn’t question her; she didn’t arouse any particular interest until, when en route to California, she started to cry. The flight attendant asked the girl what was wrong. “I am meeting a boy in Los Angeles that I have never met and I’m scared,” she said, clutching her teddy bear tighter. “I met him on the Internet.”

The alarmed flight attendant alerted authorities, and when the plane landed, agents were able to track the intended ‘boy’ to a small house in Pasadena where three other young girls were being held against their will, “servicing” as many as a dozen men a day in a human trafficking ring. The “boyfriend” was a pimp.

Steve Gutzler of Compassion2One—a Seattle-based organization dedicated to rescuing children from sexual exploitation—said that malls and other public places that attract children are major recruiting grounds for child prostitution. The exploiters are primarily looking for female minors.

Recent media reports show that human trafficking—a $32 billion industry worldwide—has become the second-fastest growing criminal industry in the nation, second only to drugs. It has made its presence known in communities such as Marin County, said Witong, who spent 32 years in the D.A.’s office.

“The average age a child enters into the life of a prostitute is 13,” Witong said, “and some are as young as 8. Many of these children are abused, neglected or homeless and they are offered friendship and often a place to stay. These children are mostly girls, but some boys are recruited also. Marin is a hub, part of a ring that extends from Southern California through Fresno, San Francisco, Oakland, Marin and then back south.”

“The classic exploiter,” Witong continued, “is going to groom these children, offer them friendship, buy them presents and perhaps offer them a place to stay. The exploiter will then have the girls turning tricks within a couple of weeks.”

This past November, Kyle Edward Beyer, 25, of Mill Valley, was sentenced to 60 days in custody for trying to meet a girl for sex at a San Rafael hotel.

Beyer was arrested in June as part of Operation Cross Country, a nationwide crackdown on human trafficking and child prostitution. Led by the U.S. Department of Justice and the FBI, the crackdown also involved local law enforcement agencies.

Beyer was caught when he responded to an Internet posting—written by a San Rafael police detective—offering sex with a 13-year-old girl. After arriving for his appointment with the supposed prostitute, Beyer was arrested at the Villa Inn.

Beyer pleaded guilty to planning to meet someone he thought was a minor, for lewd and lascivious acts. On top of the 60-day sentence, Beyer was ordered to register as a sex offender for life.

These true stories and others are evidence of the prolific crime of human trafficking throughout the nation and in Marin County, Witong said. Now she and colleague Emily Sims (Pacific Sun 2014 “Role Model” Hero of Marin) are members of the Marin County Human Trafficking Task Force, which educates the police, the public, schools and human service agencies.

“One of the problems,” Witong said, “is that the hip-hop culture and songs such as “P.I.M.P” or “It’s Hard Out Here For a Pimp” have played a huge part in society’s acceptance of the pimp culture. In addition, the first image of a pimp one might envision, is that of a male in snazzy clothes and a fancy car. The truth is, pimps can be either men or women who come from all walks of life and can be young college kids, a postal worker, a teacher, a gang member or even a high school student.”

Of the 58,115 abductions reported in 1999, 58,000 were abductions by friends, acquaintances or caregivers. “It’s a myth that prostituted children do it because of excitement,” Witong said. “Ninety-three percent of prostituted children suffered from sexual abuse prior to entering the life, 85 percent were on welfare and 50 percent were associated with gangs. And once they do they feel they haven’t a choice for a different life.” Witong, who was an NGO delegate to the UN Commission on the Status of Women, participated in the UN hearings in New York and Geneva about human trafficking.

Prostitution isn’t the only kind of human trafficking. Men and women are often trafficked for labor.

Emily Sims of West Marin Advocacy (www.westmarinadvocacy.org) is another spokeswoman and herself a victim of an abusive relationship when she was 19. “From my caseload, I’ve had three calls regarding labor trafficking cases, comprised of adult domestic workers in caregiving positions,” Sims said. “My referrals come from law enforcement and social service agencies, as well as concerned citizens. Also, I have identified over 20 survivors of sex trafficking (about three-fourths being over 18 and the other one-fourth being under 18.” Of the adult survivors, roughly half were exploited as juveniles.

Further, Sims is working on creating a digital intake form to better represent true figures. “I am collaborating on that project with the Marin Women’s Commission, Human Rights Commission and Juvenile Justice Commission,” she said.

“It’s difficult to say if numbers are decreasing or increasing,” Sims continued, because “sexual assault in general is a very underreported crime. In terms of being a true menace, yes, sexual exploitation exists in Marin County, across all racial and socioeconomic lines. I have clients from very affluent families and clients who have experienced lifelong poverty.”

The current Look Beneath the Surface campaign has been placed at 40 bus shelters throughout the county, with the aim of identifying and responding to labor trafficking. When the posters come down next month, Sims will be able to call the hotline listed on the posters to determine how many calls originated from Marin during this campaign.

In the meantime, Witong suggests that if you see any suspicious or fearful behavior among young people who are with older adults and suspect that the child may be involved in human trafficking, call The National Human Trafficking Resource Center at 1-888-373-7888. If you suddenly observe your child with an excessive amount of cash, expensive presents that you did not purchase, hotel keys, chronic running away or other erratic behavior, immediately limit your child’s interactions with the individual in question.

Then, in a safe and supportive environment, engage your child in a conversation regarding their relationship and interactions with the individual. If you discover that your child has been victimized, contact legal authorities immediately for further action.

From the salt ponds in South Korea to textile production in the third world, human trafficking is rampant. Modern slavery occurs everywhere in the world, according to a global report on human trafficking issued late last year from the UN Office on Drugs and Crime (UNODC) in Vienna. And trafficking in children is on the rise.

“Unfortunately, the report shows there is no place in the world where children, women and men are safe from human trafficking,” said UNODC Executive Director Yury Fedotov. “Official data reported to UNODC by national authorities represent only what has been detected. It is very clear that the scale of modern-day slavery is far worse.”

Girls make up two out of every three child-victims—who together with women account for 70 percent of overall trafficking victims worldwide. Children constitute 62 percent of all victims in Africa and the Middle East. Trafficking for forced labor, including manufacturing, construction, domestic work and textile production, has increased steadily over the past five years, and 35 percent of victims are female.

There are, however, regional variations as to why people are trafficked in the first place. For example, victims in Europe and Central Asia are mostly trafficked for sexual exploitation, whereas in East Asia and the Pacific, forced labor drives the market. In the Americas, the two types are detected in almost equal measure.

Most trafficking flows are interregional, the report found, and more than six out of 10 victims have been trafficked across at least one national border. The vast majority of convicted traffickers—72 per cent—are male and citizens of the country in which they operate.

However, no country is immune—there are at least 152 countries of origin and 124 countries of destination affected by trafficking in people, and over 510 trafficking flows criss-crossing the world.

This needs to change, Fedotov stressed. “Every country needs to adopt the UN Convention against Transnational Organized Crime and the protocol and commit themselves to the full implementation of their provisions.”

“Even if most countries criminalize trafficking, many people live in countries with laws which are not in compliance with international standards that would afford them full protection, such as the Trafficking in Persons Protocol,” Fedotov said.

Slavery thrives on a chain of rural islands off South Korea’s rugged southwest coast, nurtured by a long history of exploitation and the demands of trying to squeeze a living from the sea.

Five times during the last decade, revelations of slavery involving the disabled have emerged, each time generating national shame and outrage. One case prompted a nationwide government probe over the course of several months last year. Officials searched more than 38,000 salt, fish and agricultural farms and disabled facilities and found more than 100 workers who had received no or only scant pay.

Soon after the South Korean national government’s investigation of the salt farms in Guro, South Korea, activists and police found another 63 unpaid or underpaid workers on the islands, three-quarters of whom were mentally disabled. Some were severely beaten and mistreated because they could not follow instructions.

Some refused to leave the salt farms because they had nowhere else to go. Several freed disabled slaves told the AP that they will return because they believe that even the salt farms are better than life on the streets or in crowded shelters. In some cases, relatives refused to take the disabled back or sent salt farmers letters confirming that they didn’t need to pay the workers.

Yet little has changed on the islands, according to a months-long investigation by the AP based on court and police documents and dozens of interviews with freed slaves, salt farmers, villagers and officials.