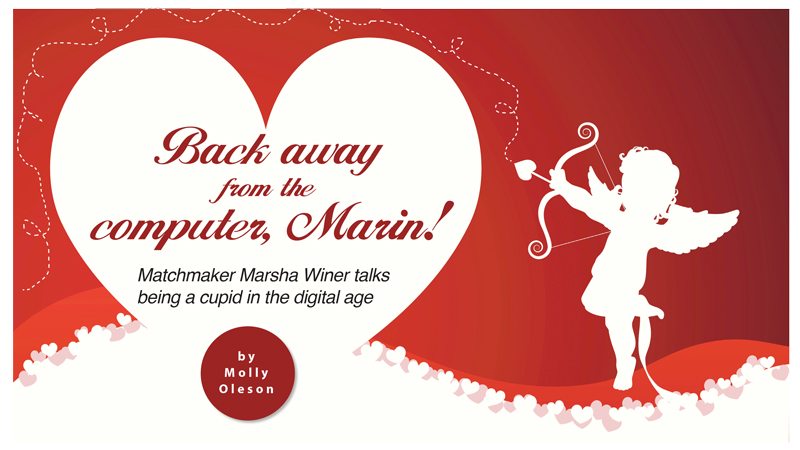 Feature: Back away from the computer, Marin!

Matchmaker Marsha Winer talks being a cupid in the digital age

“Mind if I take away this one,” a man asks, as he reaches for a section of the Chronicle on the table in front of us. He’s in his 50s or 60s, white-haired, in good shape and dressed in jeans, a hooded sweatshirt and sneakers.

We tell him to go for it.

“Thanks,” he says with a smile.

“You’re welcome,” says Marsha Winer, my guest at a bustling cafe in Tiburon. And then, as the man walks back to his table, she says under her breath, “Are you single, ’cuz we could use you!”

Winer, a professional matchmaker and founder of the 31-year-old matchmaking company Introductions by Marsha, starts cracking up. But she’s not kidding. She has a pool of beautiful, kind, confident, intelligent Bay Area women who are looking for love. And this winter, it’s not raining men.

“Does he have a wedding band on?” she asks me quickly, as if we’re about to lose him.

“He does,” Winer confirms, with disappointment in her voice. “Darn it! Now if he didn’t, then I would give him my card.” She cracks up again, and has me laughing, too. “I would!” And then she clarifies. “For my clients, not for me.”

Winer, whose lap is full of file folders containing screening questionnaires and handwritten notes about some of her approximately 100 clients, offers single, divorced and widowed men and women (currently ages 23 to 70) 12- to 15-month memberships to her traditional, old-fashioned services. A membership guarantees clients at least five—and often more—introductions to people who Winer, or her associate Judi Bliquez, have personally met—either in Marin or at their San Francisco office—and have paired for common interests, goals and values.

“They were my shortest engagement,” Winer says proudly, pointing to the framed photo she’s brought of a happy couple—posing in front of the Golden Gate Bridge—that she married off years ago. They are among the more than 250 people—everyone from futon salesmen to engineers to attorneys to doctors—that Winer has matched since moving to the Bay Area from her native Michigan in the early ’80s, after earning a B.A. and teaching credential from the University of Michigan, and a master’s degree in guidance and counseling education from Oakland University.

What started out as an “experiment” in the dating industry quickly became Winer’s “calling.” Though her business certainly didn’t begin as an alternative to online dating, today it caters to those who are seeking refuge from the wildly popular—but time-consuming, impersonal and oft-described discouraging computer-dependent romances. “Return to the good old days, when people relied on people, not machines and technology,” reads Winer’s website.

“Men are floundering online, trying their best,” Winer says of the online dating world, noting that most of her clients reach out to her because they’re tired of the exaggerations, the pretending, the games and the unmet expectations that come with it. “It’s a jungle out there,” a client once told her.

“I think nowadays people online can start a communication and then just stop communicating with no explanation at all—because it’s part of the culture,” she says. “You don’t owe them anything. Whereas with me, they kind of have to be more careful because it’s going to get back to me if they’re not treating someone properly.”

Jay, a 50-something former client of Winer’s who works in high tech, says that matchmaking appealed to him primarily for the personal service. He had “had it,” he says, after 10 years of awkward, uncomfortable Internet dating experiences following his divorce.

“The more thorough the process, the better,” says Jay, who commends Winer for things like her lengthy questionnaire that focuses on what’s most important to the client in a partner, and her one-on-one meetings. Jay was matched with his girlfriend of almost two years by Winer, who he describes as personable, extremely gracious, readily available for advice, and honest.

When asked what he found in his girlfriend that he hadn’t found in the other women he’d gone out with, he replied, “Gosh—everything.”

Not all guys ask for, or even admit, that they need help when it comes to dating, Winer says. She compares the phenomenon to men not wanting to ask for directions when they’re lost.

“Probably pride,” Jay says with a laugh, when asked why he thinks men are more reluctant than women to hire a matchmaker. “‘Oh, I don’t need a matchmaker—I can do it myself,’” he imitates a man saying. “No you can’t. Not necessarily.”

An uneven ratio of men to women isn’t Winer’s biggest challenge. “I can match people so easily,” she boasts, telling me that she “could fill a book” with the “zillions of rewards” she’s experienced over the years—like being thanked in toasts by grooms and fathers of the bride at her clients’ weddings. “That’s not the problem.”

The problem, she says, is that women today are pickier than ever before.

“‘I want him to be this height; I want him to have this color eyes,’” Winer says, imitating women clients who place more emphasis on the physical attributes of a potential partner than on his character. “It’s just not the same thing as ordering a pair of shoes online. It just isn’t.”

In her experience, Winer says that men have always been visual when it comes to finding a partner, but that online dating has made women more similar to men in this regard. Her job is more difficult and less fun if clients are obsessing about photos and making judgments before even signing up for a membership. “It goes back to spending hours studying and filtering profiles, and sifting through them, and they’re used to doing all the work,” Winer says. “It’s hard for them to give up the control.”

There’s no secret to her process, Winer says. It’s about “stirring up” an initial phone conversation that can last up to an hour with an in-person interview and the questionnaire that she asks clients to fill out. (One questionnaire she pulls out reveals that a client is most attracted to ‘independence, warm nature, intelligence, understated elegance and simplicity’ in a woman. Under his handwritten words, Winer had made a note in blue pen: ‘quiet elegance.’ “He doesn’t like the firecracker type,” she explains.) And then there’s her intuition, and her twice-a-day meditation that helps bring in the right people to match.

“I’m pretty jazzed before they even come in about who I think is there for them,” Winer says, adding that she’ll put clients on a waiting list if she doesn’t already have one, two or three really good candidates for them to look forward to.

She wishes that she could tell clients to “let go” of their laundry lists of requirements so that they are more open to meeting a person who would, in her eyes, be the perfect match for them. “I should say it more often—‘just trust me,’” she says.

But Winer also knows that being a modern-day cupid means letting go a little herself, and changing with the times to give her clients what they want. “There’s a fine line to how pushy I can be,” she says. “I can’t be like a fiddler on the roof.”

Winer declines to talk too much about her own history of love and heartache, but shares that her parents’ relationship of nearly 70 years has been an inspiration in her work. Her father, she says, kept the romance up the whole time, frequently sending her mother flowers and love letters signed, ‘All my love, your Bernie.’

“What made her happy made him happy,” Winer says with a smile.

The joy that radiates from her is similar to the joy that one can sense when Winer talks about a match she’s made. “You’re walking on air for a week,” she says. “It’s such a high.”

“Don’t wait–Get a date before it’s too late!”: Winer is offering a Valentine’s Day special for men: two for the price of one membership, good through Sunday, March 15. For more information, visit www.matchmakerssanfrancisco.com or call 415/499-1160.

Match up with Molly at [email protected]

Pacific Sun
The Pacific Sun publishes every Wednesday, delivering 21,000 copies to 520 locations throughout Marin County.
Previous articleLetter: ‘You won’t spoil our party …’
Next articleHuey Lewis rocked out at the Redwoods in Mill Valley