I don’t know anyone who attends theater to reinforce a belief that life is simply a series of travails to be endured until the sweet release of death, but if you’re out there, have I got show for you. Birdbath Theatres is presenting Anton Chekhov’s Uncle Vanya in a new adaptation by Jesse Brownstein, directed by David Abrams.

A perpetually infirmed Serebryakov, after spending the summer at the estate, has come to a decision: he wishes to sell the estate to come up with enough money to purchase a nice retirement cottage in Finland for himself and his wife. What of the others who live there? Well, those details can be worked out later.

This infuriates Vanya, who’s already ticked off because Yelena, for whom he secretly pines, has shown affection for country doctor Astrov (Jesse Lumb), who has also caught the eye of the perpetually sad Sonya, who bemoans her looks. After two and a half hours, no one ends up with anyone, nothing is sold, and life drones on.

Abrams takes a minimalist approach to Chekhov’s look at the miserable lives of a turn-of-the-20th-century Russian family. There’s no set to speak of, and the action (I use that term loosely) often takes place at opposites sides of the small space, leaving many in the audience watching the play is if it were a tennis match.

It’s a well-acted production, however, with Garcia’s Vanya a cauldron of self-loathing who, after finally boiling over, returns to a state of eternal simmering. Lumb’s Dr. Astrov is the least dreary of the lot who, while filled with remorse about his life decisions, provides a welcome spark to the often-lethargic proceedings.

The play’s bleak tone is reinforced with some fine cello accompaniment by Diego Martínez Mendiola. Is there any sadder sound produced than that of the bowed chordophone?

Regret is the overriding theme of Uncle Vanya—the regret that comes when revisiting the decisions that define a life. I don’t regret the time I spent with the dispiriting Voinitsky family, but I don’t see the need to revisit them anytime soon. 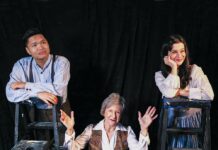 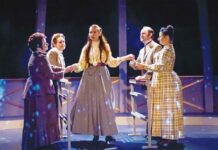 Stars come out in latest production