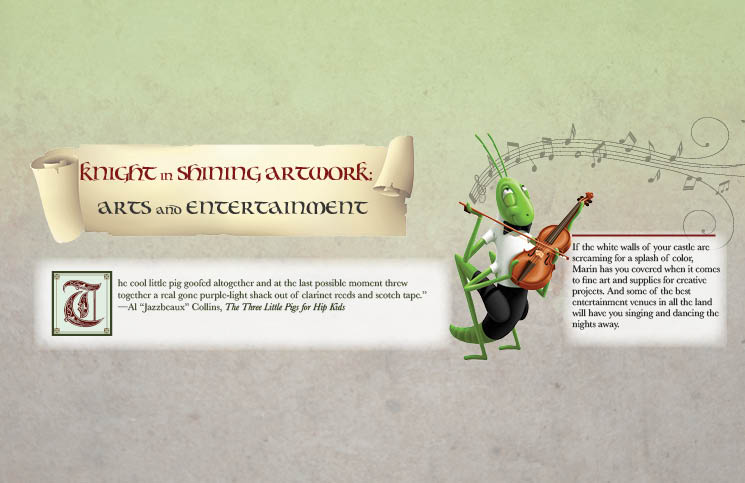 Best of Marin 2015: Arts and Entertainment

“We are where the arts and the community connect,” explains Art Works Downtown Executive Director Elisabeth Setten. Founder Phyllis Thelen, who is also responsible for starting the Marin Ballet, realized Art Works as a way to revitalize downtown San Rafael into a cultural hub of Marin. 1337 Gallery, the organization’s premiere exhibition space at 1337 Fourth Street, opened in 1997. Art Works Downtown consists of four art galleries, 28 artist studios, 17 affordable housing units and four commercial tenants—a ceramics center, jewelers guild, framing shop and a restaurant. Program Manager Stan Gibbs oversees the public sculpture program, which showcases 12 rotating sculptures throughout the year. “The arts have been dormant since the recession, and now [they’re] coming back,” comments Carol Durham, a veteran gallery installation designer of 18 years. Board President Erick Moreau, an artist himself, notes how Art Works Downtown has fostered “an evolution of the arts scene where it hadn’t existed before.”

If you need ideas or materials for your next creative art project, browsing at Michaels will delight you. Whether you’re working with dried flowers, paint, beads, jewelry, scrapbooks or mixed media, you’re bound to find stuff that sparks your creativity. “When you have young kids, having a place like Michaels nearby is very handy,” says a local parent. “There always seems to be a school project that requires the kinds of crafty items Michaels has.” Along with an impressive variety of art and craft supplies, the store also offers classes, custom framing, custom invitations and a range of seasonal products, including cards, ornaments and decorations.

After reopening in 2012, Sweetwater Music Hall has offered a variety of entertainment for people to enjoy. A state-of-the-art nightclub and cafe, the Sweetwater—originally opened in 1972—treats audiences to shows by favorite musical artists, as well as performances by local and emerging talent. Big-name artists, including Carlos Santana, Clarence Clemons and Etta James, have graced the small stage at Sweetwater, and the place has become a Marin treasure. The chefs behind the café offer seasonal cuisine to go along with the foot-stompin’ fun.

If you’re a serious film aficionado, then it’s likely that you have enjoyed an interesting film or program at the Christopher B. Smith Rafael Film Center. “We take pride in being a community organization,” says Richard Peterson, director of programming, who has been with the center since it opened 16 years ago, “and it is our artistic responsibility to let filmmakers get their films seen.” In addition to presenting eclectic and educational films from all over the world at the Rafael Theater, the center puts on the annual Mill Valley Film Festival. And that’s not all: A number of film-related classes, workshops and seminars are offered. A nonprofit, the center’s focus is more on quality programming than profits. “We like to be the nexus of the community—this theater belongs to them,” says General Manager Dan Zastrow. “It’s like a sacred charge.”

The Magic Flute is your one-stop music shop, offering anything and everything musical that you might be looking for. “We’re Marin’s complete music store,” says owner Christian Dean. “We serve people from the beginning of their musical journey, and continue throughout their entire lives. It’s a family place where people love to come and browse.” The store sells and rents a cornucopia of musical instruments—from drums to violins to flutes to—ukuleles! It also carries a huge selection of sheet music, and offers lessons and repair services. The Magic Flute has been in business since 1976—no wonder people love and trust the place. A new feature of the store is the “boutique guitar lounge,” an area with plush seating where people can take a load off and get a few riffs going.

The esteemed Sweetwater Music Hall has not only been crowned this year as the Best Live Music Venue in Marin, but also as the best place to cut a rug. Since its reopening in January of 2012, the hall has provided dancing that never seems to stop. When local and big-name performers take the stage, it’s hard to keep still. Boasting all types of musical performances, the Sweetwater has something for everyone. So dance your little heart out.

BEST PLACE TO STAY THE NIGHT

Blessed with sweeping views of the Golden Gate Bridge and San Francisco Bay, and spread out over an expansive green space, Cavallo Point Lodge is hard to beat when it comes to getting away from it all. Guests at Cavallo Point enjoy spacious two-bedroom, family-friendly suites with the finest amenities, including a private entrance, cozy gas fireplace, panoramic floor-to-ceiling windows, radiant heat floors, bamboo furnishings, cozy sitting areas and organic bedding. The property includes a fine restaurant and day spa, and offers a wide variety of activities, including cooking classes, hikes, kayaking, yoga and much more. It’s a perfect destination for out-of-town guests, or for locals wanting to take a relaxing “staycation.”

BEST PLACE FOR A WEDDING

A magical setting for a magical day. That’s what you get at Cavallo Point Lodge, which also takes home the gold this year for the Best Place to Stay the Night. Nestled into a hillside by the Golden Gate Bridge, with breathtaking views and acres of greenery, Cavallo Point is about as romantic as it gets. Throw in an inviting event space, gourmet dining, a relaxing day spa and luxurious accommodations, and you have it all. Convenient to San Francisco and the Napa and Sonoma wine country, this place is the ideal setting for a joyful celebration that will set the stage for the rest of your life.

You don’t have to go into San Francisco to get a taste of excellent theater. Marin Theatre Company (MTC) in Mill Valley is known for its exhilarating performances, inspired, new American plays and powerful theatrical experiences. Founded in 1966, MTC has grown to become the leading professional theater company in the North Bay. It produces a six-show season of provocative plays by passionate playwrights from the 20th century, as well as a five-show Theater Series for Young Audiences in partnership with the Bay Area Children’s Theatre.