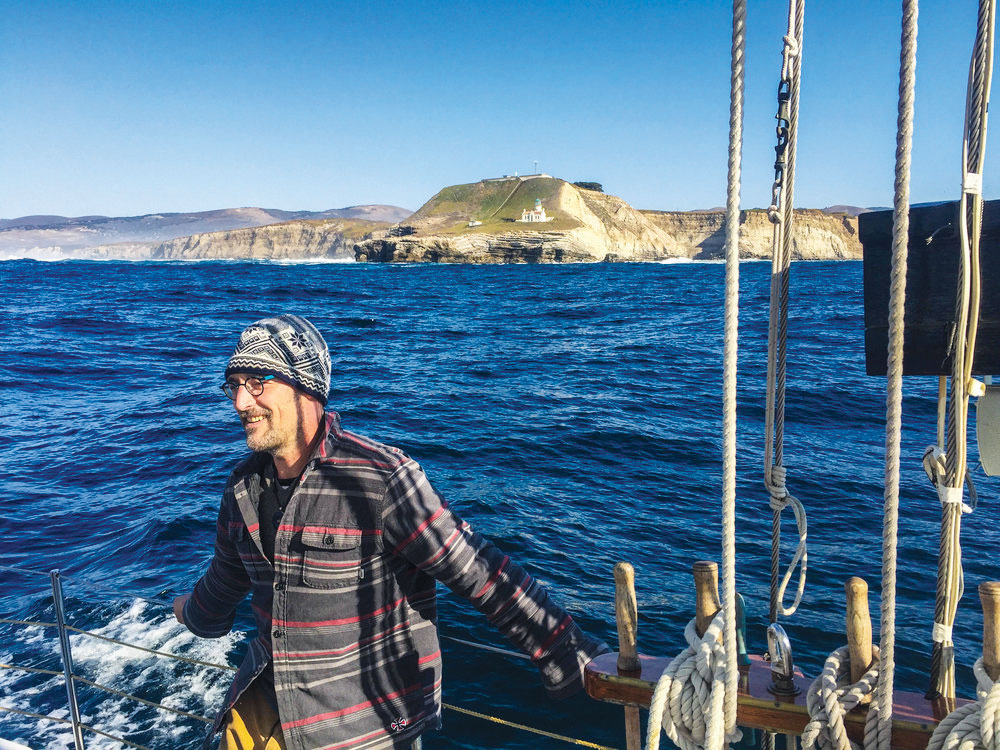 Dave Johnson’s career as a chef has landed him in some unique kitchens. He’s cooked on boats, on the beach and even with a tribe on the Wild Coast of South Africa. Today, he runs Davey Jones Deli in Sausalito, located in a bait shop with a small, non-traditional kitchen, producing what he calls “sandwizardry.”

“Forget everything you know about sandwiches,” Johnson says. He sources ingredients locally, roasts his own turkey daily and creates all of the condiments in-house, including roasted red pepper sauce, sesame sea salt and spicy mustard. His sandwiches, the menu boasts, “will make you strong like a lion.”

For nine years, people have lined up for Johnson’s artisanal wraps, sandwiches and salads, and maybe to hear a yarn or two about the chef’s seafaring days. The Iowa native logged many sea miles sailing tall ships. “I experienced the wonders of the creator,” he says.

Though he quit the sea, he can’t seem to leave the water. He lives in Sausalito on a quaint houseboat that he recently rebuilt and shares with his wife, Kristine Barrett, a multi-genre singer.

The couple share a love of music. When he isn’t working at the deli, Johnson plays guitar with a jazz band called the Hot Clams. They mostly play house parties in Sausalito.

“It has to be within bicycle distance,” Johnson says. He doesn’t care for cars; instead he pedals around the town he loves on a green electric bike, often with his dog, Gandalf, a Catahoula mix, trotting beside him.

Rodeo Beach at Fort Cronkhite ranks among Johnson’s preferred environs. “The sea there is violent, dangerous, huge and wild,” he says. On a clear day, he relishes the view of the Farallon Islands, which reminds him of the few times he was fortunate enough to visit the marine sanctuary.

On land, you might see him at the Travis Marina Bar in Fort Baker. Somewhat hidden on the second floor of the Travis Sailing Center, the casual bar provides a view of the Golden Gate Bridge, and it hosts live music on Thursday through Sunday. Gandalf and all friendly dogs are welcome on the patio.

Fish is one of Johnson’s favorite restaurants. “I love their ethics,” he says of the restaurant that serves only fresh and sustainable seafood. He’s also a fan of the ambiance, since Fish is situated on the water. “Gandalf likes to go, too,” he says.

When Johnson’s ready to cook, he bikes over to Driver’s Market & Deli on Caledonia Street. He appreciates that it’s locally owned and trusts it to carry the locally sourced and fine ingredients he needs to craft a home-cooked meal.

Johnson breaks bread from the Portside Bakery. Sam Schwartz, head baker and houseboat dweller, sells his Sausalito sourdough bread and other baked goods to the public at the San Rafael Civic Center Farmers Market on Thursdays.

The Spaulding Marine Center on Gate Five Road offers Johnson the chance to commune with his sailing spirit. The nonprofit organization, dedicated to preserving and sharing the Bay Area’s maritime history, houses a 20,000-square-foot boatyard, a nautical library and the historic 1885 sloop Freda, the oldest sailing yacht on the West Coast.

For more tips from Johnson on the art of sandwich making and all things Sausalito, visit him at Davey Jones Deli inside the New Bait Shop at 1 Gate 6 Road.—Nikki Silverstein