.Sealed for your protection 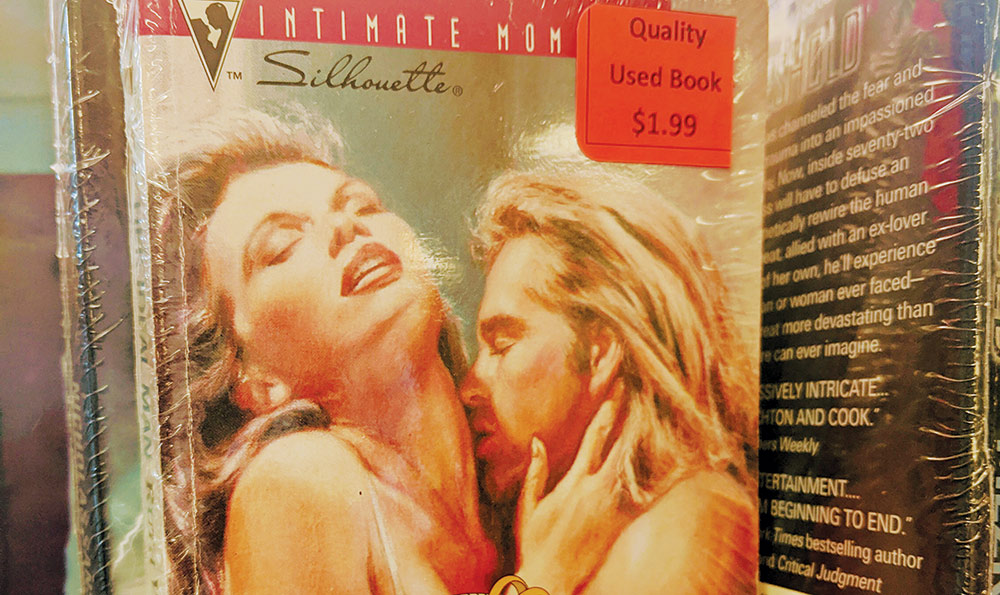 Shrink-wrapped, used paperback books. It’s a thing. I spotted a rack of them in a Calistoga drugstore.

Among the titles were the usual suspects like Sue Grafton’s “infinite alphabet” series (Z is for Zomebody Please Kill Me) and the no-doubt scintillating Her Ideal Man. Because they trapped the book inside form-fitting plastic, I couldn’t thumb through it—but I suspect it’s about a man who is ideal and, maybe, Fabio.

This kind of literary sleuthing is what an English degree is for—I bet. Whether or not a melted, transparent film appreciably increases the resale value of these titles, I cannot say. But if it does, I’m going to insist the Bohemian get the plastic treatment. Will it up the newstand value? Trick question—the Bohemian is free. Besides, you can’t put a price on the freedom of the press, can you? Don’t answer that.

Shrink-wrapping is a lens through which we can perceive something exquisitely on its own tattered terms. If we could shrink-wrap the perfect imperfections of our souls, we’d probably be better for it. And not because we’d all suffocate. Though I have to admit to a Sylvia Plath–like, by-way-of-polyvinyl-chloride-compulsion to stick my head in a shrink-wrap machine.

Perhaps I’d become like those saints whose bodies don’t decompose, the so-called “incorruptibles,” who no matter how green and leathery they look, are somehow in an everlasting state of beatification. At this point, that’s about as close to literary immortality I’m going to get—so crank up the machine.

Speaking of plastics, Buck Henry, the screenwriter behind one of the most iconic lines from The Graduate, died. As a refresher, the line went like this:

Mr. McGuire: I want to say one word to you. Just one word.

Mr. McGuire: Are you listening?

Benjamin: Yes, I am.

That, and an Oscar nomination, will keep you working in the biz for half a century. Henry was 89.

The results are life-sized Visible Man anatomy models. Hagens tours a show called “Body Worlds” that features dozens of plastinized cadavers, splayed and filleted in a variety of ways. It’s like walking into Nirvana’s In Utero album cover but without having to endure the ‘90s.

When performing his anatomical dissections, von Hagens insists on wearing a black fedora as a sort of sartorial reference to a hat depicted in Rembrandt’s The Anatomy Lesson of Dr. Nicolaes Tulp. It’s also sinister as hell when he’s pumping corpses full of plastic.