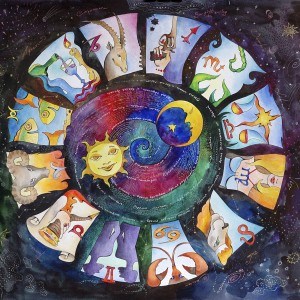 ARIES (March 21–April 19)  In her poem “Shedding Skin,” Harryette Mullen compares her own transformation to the action a snake periodically carries out to renew itself. Since you now have an excellent opportunity to undertake your own molting process, you may find her thoughts helpful. (I’ve rendered them in prose for easier reading.) “Pulling out of the old scarred skin—old rough thing I don’t need now—I strip off, slip out of, leave behind. Shedding toughness, peeling layers down to vulnerable stuff. And I’m blinking off old eyelids for a new way of seeing. By the rock I rub against, I’m going to be tender again.” Halloween costume suggestion: snake sloughing its skin.

TAURUS (April 20–May 20)  “Only the young and stupid are confident about sex and romance,” says 49-year-old author Elizabeth Gilbert, who has written extensively about those subjects. I agree with her. I’ve devoted myself to studying the mysteries of love for many years, yet still feel like a rookie. Even if you are smarter about these matters than Gilbert and I, Taurus, I urge you to adopt a humble and curious attitude during the next few weeks. The cosmos has prepared some interesting lessons for you, and the best way to take advantage is to be eagerly receptive and open-minded. Halloween costume suggestion: sex researcher, love explorer, intimacy experimenter.

GEMINI (May 21–June 20)  “My way of learning is to heave a wild and unpredictable monkey wrench into the machinery,” wrote Gemini author Dashiell Hammett. But I recommend that you use his approach very rarely, and only when other learning methods aren’t working. Most of the time, your best strategy for getting the lessons you need is to put lubricating oil into the machinery, not a monkey wrench. That’ll be especially true in the coming weeks. I suggest that you turn the machinery off for a while as you add the oil and do some maintenance. Halloween costume suggestion: repair person; computer techie; machine whisperer.

CANCER (June 21–July 22)  The great Swedish filmmaker Ingmar Bergman was a Cancerian, like you and me. One of the factors contributing to his success was that he put his demons to good use “by harnessing them to his chariot.” He also testified that he gained control over his demons by taking long walks after breakfast. “Demons don’t like fresh air,” he said. “They prefer it if you stay in bed with cold feet.” I suspect that now would be an excellent time to adopt his advice. Halloween costume suggestion: walk your demon on a leash, or make it into a puppet, or harness it to your chariot.

LEO (July 23–August 22)  Throughout the Halloween season, I encourage you to fantasize extensively about what your dream home would look like and feel like if you had all the money necessary to create it. What colors would you paint the walls? Would you have carpets or hardwood floors? What would be your perfect lighting, furniture and décor? As you gazed out your windows, what views would you see? Would there be nature nearby or urban hotspots? Would you have an office or music room or art studio? Have fun imagining the sanctuary that would bring out the best in you. Halloween costume suggestion: the ultimate homebody.

VIRGO (August 23–September 22)  “Extraordinary things are always hiding in places people never think to look,” writes novelist Jodi Picoult. That’s crucial for you to meditate on during the coming weeks. Why? Because your superpower is going to be the ability to find extraordinary things that are hiding in places where people have almost never thought to look. You can do both yourself and those you care for a big favor by focusing your intensity on this task. Halloween costume suggestions: sleuth, treasure hunter, private eye, Sherlock Holmes.

LIBRA (September 23–October 22)  “There is a season for wildness and a season for settledness, and this is neither. This season is about becoming.” Author Shauna Niequist wrote that. In accordance with the astrological omens, I endorse her perspective as true and useful for you. You’ve zipped through your time of fertile chaos, conjuring up fresh possibilities. When January arrives, you’ll be ready to work on stability and security. But for now, your assignment is to blossom. Halloween costume suggestions: beautiful creature hatching from an egg; strong sprout cracking out of a seed.

SCORPIO (October 23–November 21)  “He believed in magic,” writes author Michael Chabon about a character in his novel The Amazing Adventures of Kavalier & Clay. “Not in the so-called magic of candles, pentagrams, and bat wings,” nor “dowsing rods, séances, weeping statues, werewolves, wonders, or miracles.” Then what kind? Chabon says it’s the “impersonal magic of life,” like coincidences and portents that reveal their meanings in retrospect. I bring this to your attention, Scorpio, because now is a favorable time to call on the specific kind of magic that you regard as real and helpful. What kind of magic is that? Halloween costume suggestion: magician, witch, wizard.

SAGITTARIUS (November 22–December 21)  “If adventures will not befall a young lady in her own village, she must seek them abroad.” Sagittarian author Jane Austen wrote that in her novel Northanger Abbey, and now I’m passing her message on to you, slightly altered. My version is, “If adventures will not befall Sagittarian people of any age or gender in their own neighborhood, they must seek them abroad.” And where exactly is “abroad”? The dictionary says it might mean a foreign country, or it could simply mean outside or in another place. I’d like to extend the meaning further to include anywhere outside your known and familiar world. Halloween costume suggestion: traveler on a pilgrimage or explorer on a holy quest.

CAPRICORN (December 22–January 19)  PR executives at a beer company offered to pay me a lot of money if I would sneak a product placement ad into your horoscope. They asked me to pretend there was a viable astrological reason to recommend that you imbibe their product in abundance. But the truth is, the actual planetary omens suggest the opposite. You should not in fact be lounging around in a haze of intoxication. You should instead be working hard to drum up support for your labor of love or your favorite cause. Very Important People will be more available to you than usual, and you’ll be wise to seek their input. Halloween costume suggestion: the Ultimate Fundraiser; Networker of the Year; Chief Hobnobber.

AQUARIUS (January 20–February 18)  “What kind of idea are you?” asks author Salmon Rushdie. “Are you the kind that compromises, does deals, accommodates itself, aims to find a niche, to survive; or are you the cussed, bloody-minded, ramrod-backed type of damnfool notion that would rather break than sway with the breeze?” I pose this question to you, Aquarius, because I think you could be an effective version of either idea in the coming weeks. If you’re the latter—the cussed, damnfool notion—you may change your world in dramatic ways. Halloween costume suggestions: revolutionary; crusader; agitator; rabble-rouser.

PISCES (February 19–March 20)  “There is no beauty without some strangeness,” wrote Edgar Allen Poe. Fashion designer Rei Kawakubo ventured further, declaring, “Strangeness is a necessary ingredient in beauty.” She also added another nuance to her definition: “For something to be beautiful, it doesn’t have to be pretty.” I’ll offer you one more seed for thought: wabi-sabi. It’s a Japanese term that refers to a kind of beauty that’s imperfect, transitory and incomplete. I bring these clues to your attention, Pisces, because now is an excellent time to refine and clarify your own notion of beauty—and re-commit yourself to embodying it. Halloween costume suggestion: the embodiment of your definition of beauty.