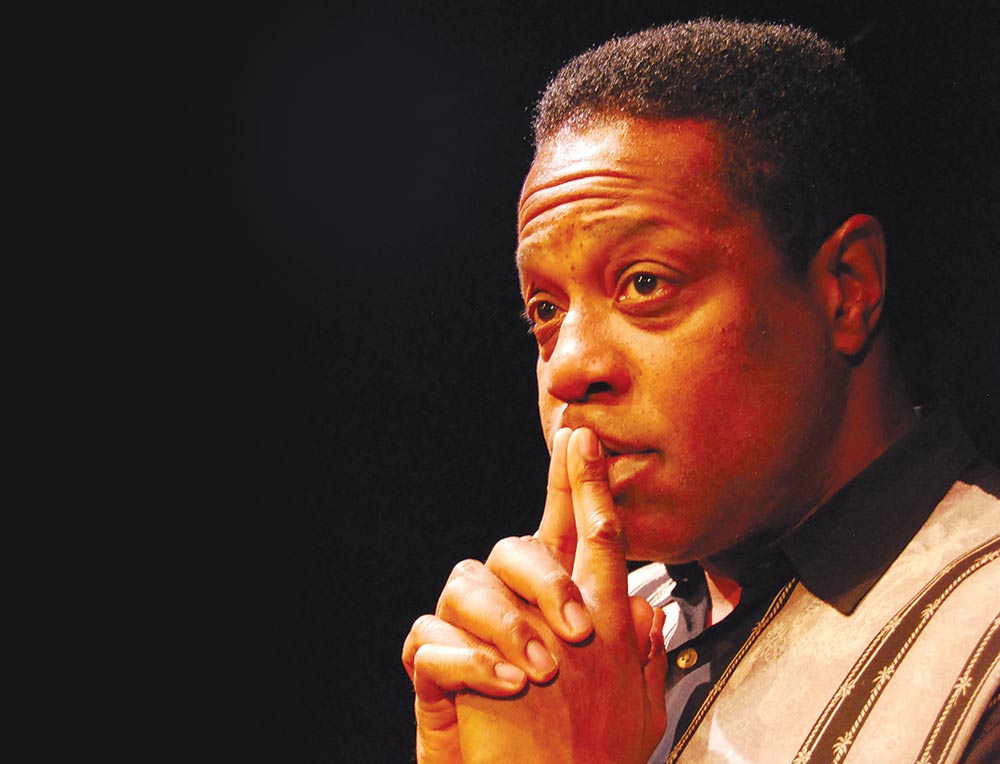 When Brian Copeland moved from Birmingham, Ala. to San Leandro, Calif. at age 8 in the early 1970s, the town, which borders Oakland, was 99 percent white. Copeland, who’s black, experienced racial profiling and affronts from his white landlords, neighbors, schoolmates and police. After surviving childhood and finding his voice through theater, comedy and talk radio, Copeland experienced another affront, this time from African-American audience members or radio listeners who accused him of not being a “genuine black man.”

It’s a duplicity Copeland spent years trying to work out in his mind, and it’s a story he shares with audiences in his acclaimed one-man-show Not a Genuine Black Man, which premiered in San Francisco 15 years ago, and which Copeland still regularly performs to sold-out crowds.

Not a Genuine Black Man is one of several hit one-man-plays Copeland has written and performed in the last two decades that address personal issues like his own struggles with depression in The Waiting Game and political issues like the true-crime story of The Scion. His latest, The Great American Sh*T Show with Charlie Varon, returns to San Rafael for a performance on Aug. 18 at the Marin Center.

“My father was never around, my mother and grandmother raised me, and my mother died when I was 14,” says Copeland of his childhood. “So it was grandma, and she was always supportive of anything that I wanted to do.”

In fifth grade, Copeland was introduced to theater, and began performing in the school musical every year. The plan was for him to become a lawyer when he graduated from high school, but fate intervened when Tommy Thomas, better known as Tommy T, opened the original Tommy T’s Comedy Club about a mile from Copeland’s house.

Copeland was already a fan of comedy,—using a fake ID to get into clubs in San Francisco—and he approached Thomas about performing at an open mic.

Still, he got laughs on stage and got hooked on comedy. Copeland began working on his standup while also attending pre-law classes and working full time. Soon, he knew he had to make a choice.

“I gave myself one year with comedy,” says Copeland, who took a leave of absence from school and quit his day job when he was 20 years old. “If in one year I wasn’t doing anything with this or making any money, I would go back to school and the camera shop where I worked, but I never went back.”

He worked his way up the Bay Area comedy scene to become a headliner, and after signing a deal with Hollywood-based talent agency William Morris, Copeland often hit the road to open for performers like Aretha Franklin, Dionne Warwick, Ray Charles, Natalie Cole and other legendary artists.

At the same time, Copeland made a name for himself on the radio, turning guest spots on KGO into a regular weekend program, The Brian Copeland Show, which debuted in 1994 and was for years the most listened-to radio show in its time slot. In the mid–2000s, Copeland also did a weekly commentary feature for the station called Copeland’s Corner, and he was also often heard on the air with KGO veteran Ronn Owens of the Ronn Owens Report.

“When I started in 1975, I was doing the evening shift,” remembers Owens. “Brian would call in with an absolutely perfect imitation of the late Ray Taliaferro (KGO’s early-morning host). It was so unbelievably good; I invited him into the studio. That’s how we first got together.”

Most recently, Owens and Copeland teamed up for the R&B (Ron and Brian) Joke Hour, a segment in which Owens solicited jokes from the audience and read them aloud on the air. “The ones that were really good I kept, and the ones that were questionable, I gave to Brian,” Owens laughs. “The irony is that people love that show. I’ve interviewed three presidents of the United States and people still ask me more about the R&B Joke Hour than anything else.”

Copeland’s broadcasting career also includes hosting programs on just about every Bay Area television station, including a five-year stint as co-host of KTVU’s Mornings on 2.

All the while, Copeland struggled with identity, depression and other internal conflicts that eventually came out in his playwriting.

“For years, I wanted to do a one-man show, but I had no idea what to do a show about,” Copeland says. “I had (television and film legend) Carl Reiner as a guest on my radio show, and during the break I told him I wanted to write something, but I didn’t know what to write.”

“He said every writer and performer goes through this,” Copeland says. “He said, ‘For me, it was 1959, I had been (writing for television) with Sid Caesar for years, I had no idea what to do; and then I got this book by radio comedian Fred Allen, Treadmill to Oblivion. In the book, Fred Allen says you have to find the piece of ground you alone stand on and write from there. I thought, what’s my piece of ground? I’m a married comedy writer in New Rochelle with my wife and kids writing for a comedy show in New York, and that idea became The Dick Van Dyke Show.’”

“That was Carl’s piece of ground, Dick van Dyke’s character was Carl,” Copeland says. Just as Reiner drew from his life for his storytelling, Copeland was inspired to write Not a Genuine Black Man from his own life experience.

“I got a crank letter at the radio station a few weeks after that and the letter said, ‘As an African-American, I am disgusted every time I hear your voice because you are not a genuine black man.’ I thought, bingo, that’s my piece of ground,” Copeland says. “I have lived with that nonsense for a lot of my adult life, this whole being ‘too white for black people and too black for white people.’”

As much as Not a Genuine Black Man is a study in racial stereotypes and an autobiographical account of Copeland’s experiences, the show is a universal tale of being alone.

“At some point in your life, you’re going to be the only one—the only man, the only woman, the only Christian or Muslim or Jew,” Copeland says. “This whole racial-betrayal nonsense shows up in every culture.”

While writing the show, Copeland also learned about the widespread housing discrimination charges that were leveled against San Leandro organizations and landlords in the ‘70s.

“Now my story had changed, it’s not just my story, it’s the story of the evolution of the city,” Copeland says. The show debuted at San Francisco venue The Marsh in 2004 and was scheduled to run six weeks. It ran for three years straight. Copeland took the show national for another eight years, performing it in over 30 cities, including a critically acclaimed run Off-Broadway.

He recently brought Not a Genuine Black Man back to the stage because of the highly charged racial and political climate of the day, performing it at The Marsh in between performing his latest work, The Great American Sh*t Show, in which he and actor/writer Charlie Varon trade off monologues about their experiences over the last three years.

Varon and Copeland first met in 2004, when Copeland was working on Not a Genuine Black Man. “There’s this fascinating moment when an artist discovers something, finds some new truth, some new way of speaking about reality,” says Varon. “For Brian, it’s both personal and political. He’s got this incredible cocktail of standup comedy, personal storytelling and a sensibility that is his and his alone. He’s able to encapsulate pain and absurdity in the same breath.”

Varon calls The Great American Sh*t Show a completely accidental show that came about after he heard Copeland tell a story onstage about being called the n-word for the first time in years on the day after the 2016 election, from a guy driving a Prius no less. “An environmentalist and a racist,” Varon laughs. “All I know is: I left the theater a different person after hearing Brian’s monologue.” He approached Copeland about collaborating on a full show about life in the Age of Trump, and the two developed the show to say all the things they’ve been feeling since November 2016.

While The Great American Sh*t Show also touches on topics ranging from the #MeToo movement to the separation of families at the border, it’s not all despair. Rather, the show is a cathartic dose of laughter and insight Copeland and Varon both admit is preaching to the choir. “And the choir is really grateful for the sermon,” says Varon. “The show brings people together to acknowledge what we’re living through (and) how unprecedented it is, and to affirm that we can take action and work to change the situation.”

In addition to performing The Great American Sh*t Show in San Rafael this month, Copeland is preparing to bring back his popular “Best of SF Solo Series,” in which he invites other Bay Area monologists to perform in Marin, beginning in October.

“Brian is one of the most generous artists I’ve met,” Varon says. “He’s always looking for the next artistic gift he can give.”