So Rocketman commences with Elton John (Taron Egerton), dressed in a pomegranate-hued devil costume, striding toward a circle of metal folding chairs. In recovery you’re supposed to be anonymous. Elton is there to state his full name and confess his polydrug abuse and sex addiction. The addicts hang on his words. One asks, “What were you like as a child?”

Not that question! A lonely prodigy in the London suburbs, that’s what, complete with ice cold dad (Steven Mackintosh), and withholding mom (Bryce Dallas Howard in a role Gemma Arterton would have improved). Young Elton (Matthew Illesley) sings “The Bitch Is Back,” not a song one associates with 10-year-olds, to a crowd of dancing 1950s neighbors in a cul-de-sac. This lost kid keeps returning for encores throughout the movie. Sometimes he gazes at his grown-up self, wasted by drugs, or wearing stage costumes that look, as This is Spinal Tap had it, like “some Australian’s nightmare”.

Director Dexter Fletcher, who took over from Bryan Singer on Bohemian Rhapsody, bills this as a “true fantasy.” The fiction may be upfront—composite characters cannot sue—but it’s awfully familiar. First the new identity; a stage name taken from musician Elton Dean and, here, John Lennon. British bluesman Long John Baldry, the actual source, and in real life the “someone” who saved Elton John’s life, is cut out of the picture.

The hungry years get their due, thanks to Stephen Graham as Dick James, a cigar-chomping Denmark Street manager. That’s where young Elton meets Jamie Bell’s lyricist Bernie Taupin. Bell is so appealingly understated that it would seem to have been a better idea to make Rocketman a bromance between an anguished, flamboyant performer and his no-drama mate.

Then comes the cocaine nosebleeds, cascades of pills, blackouts and yet another cold shoulder from mom and dad. Against this worn-out material, the live shows perk things up. The closest Rocketman gets to the appealing delirium it seeks is when Elton rises up from a show at Dodger Stadium in his blue rhinestone baseball uniform, flies into the air and hits a passing jet plane like a skyrocket…then comes to consciousness aboard the plane, flying to some other gig.

Gauche as it can be, Rocketman has its pleasures, but the arrangements lack the firepower of Elton’s best live album, 11/7/70, and the songs are out of timeline, so we don’t see his development as a musician. As seen here, Honky Chateau seem to have been recorded after that unbearably twee megahit Goodbye Yellow Brick Road.

As Elton, Egerton has the voice close enough for memory’s sake. But Fletcher favors tight closeups, making sure Egerton eats his heart out around an ever-changing selection of novelty eyewear. Like elderly performers, stage outfits are meant to be seen from 20-feet away. It’s hard to feel the pain of a man when he’s dressed like Papageno in The Magic Flute.

To its credit, Rocketman isn’t nervous about Elton’s sexuality. One of Elton’s best songs, “Take Me to The Pilot,” is dubbed over the first tryst between Elton and his new love and new manager John Reid (Game of Thrones’ Richard Madden); the two can’t get their pants off fast enough. “Honkey Cat,” with its pleasing New Orleans licks on a Fender Rhodes, is dubbed over the new couple’s shopping spree.

Lest we forget, the road to excess is a toll road. Elton tells his therapy group that he loved every crazy moment of it, but Rocketman won’t buy that. Rock music trusts us to know what fun too much fun can be. Mainstream biopics may honor the flight paths of a star, but they always have to bring the story thuddingly to earth.

‘Rocketman’ open on Friday, May 31, in wide release. 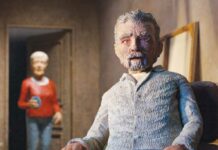 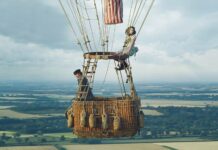 ‘Aeronauts’ keeps its head in the clouds 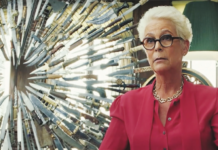