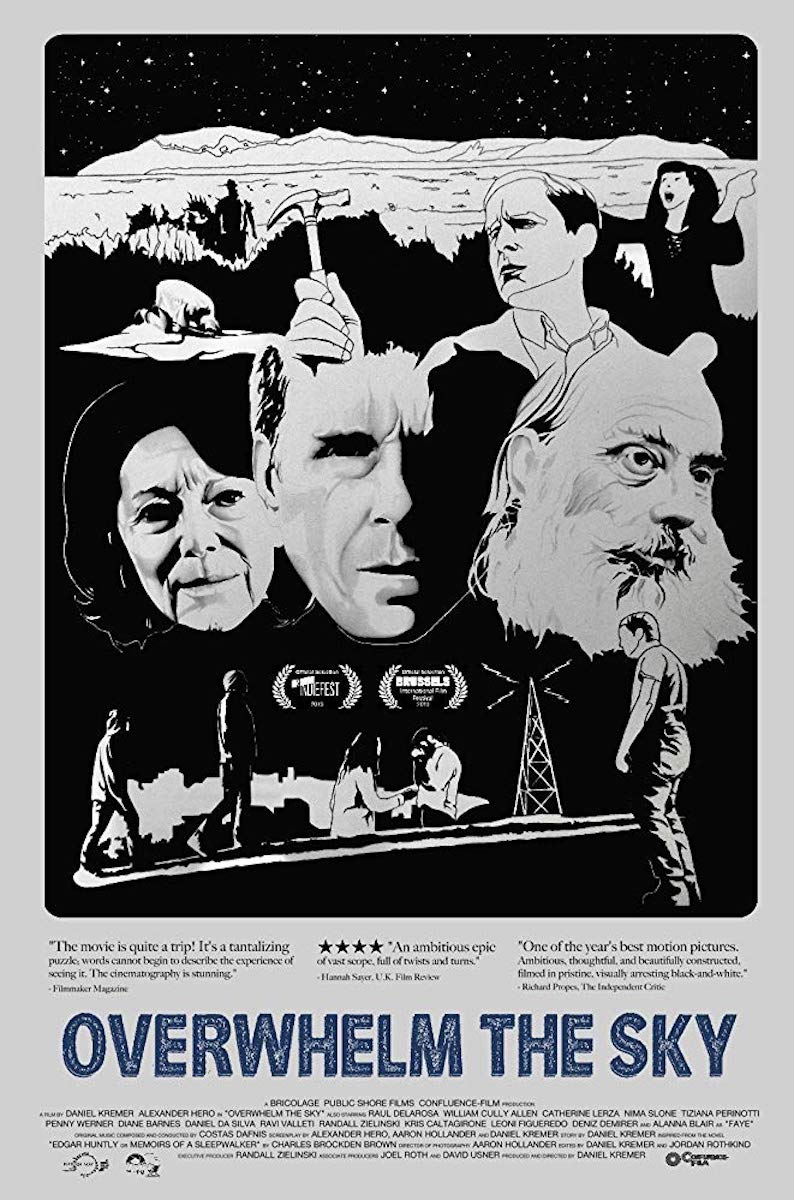 ‘Overwhelm the Sky’ Makes its reach

Overwhelm the Sky is the kind of slippery film that gets called “ambitious” as a backhanded way of saying that it tried hard. The tone ranges from cryptic to unambiguously theatrical, and you’re even less sure that its ducks are in a row than you are that you’re actually seeing ducks in the first place—were they cranes? Hand puppets? Pterodactyls? Any ambitions director Daniel Kremer has are fulfilled, as he works in wide-screen black and white to blend lush visuals and an orchestral soundtrack; his story presents chafing antagonism, gathering uneasiness and straight-up alienation

The Robert Duvall-like Alexander Hero plays Eddie, a sleepless and haunted San Franciscan whose brother in law was murdered in a motiveless hammer attack in Golden Gate Park. Like every lost soul in a surrealist movie, Eddie has a horrible job: a “KSFJ” chat show called “Fallen Territory.” The milieu resembles Pacifica Radio in the management’s crucifying self-importance, the irritating political cranks as guests, and the adversarial office politics. The program is sort of bequeathed to Eddie by a friend who is heading to Arabia, searching for what he calls “solace.”

An enigmatic aged hippie drifter called Carmine is a friend of the uncle who has been putting Eddie up. Eddie suspects–and not without grounds–the old man may be responsible for the murder. Tracking Carmine, Eddie is a useless and unhinged detective, though he’s smart enough to follow the cagey old drifter to the Navajo lands (played here by Mono Lake).

Kremer excels in his casting of the women in the movie. There’s no one girl savior for Eddie–if you don’t count his cherished sister Fay, who materializes in his room to address his loneliness

But there are other powerful female figures– the movie evades misogyny by the way they hold their space, making this film seem like a more downbeat and malicious After Hours. There’s Tiziana Perinottie as a Slavic, pigtailed weirdette who does a dance for the numb Eddie. Leoni Figueredo is the self-amused guest who gives Eddie’s radio career the coup de grace it deserves, and Diane Barnes is a formidable Dine woman named “Mab Nuissance” who idly considers shooting this lost man as a trespasser.

Sometimes frustrating, and often genuinely frightening, Overwhelm the Sky proves Kremer is a talent to watch. And by his influence, Kremer underscores that David Lynch is indeed the most important filmmaker of our era—who makes his world from ambient malice, loaded, bandying words, tantalizing clues, perplexing coincidences, and subtle shifts that wobble the fabric of reality.