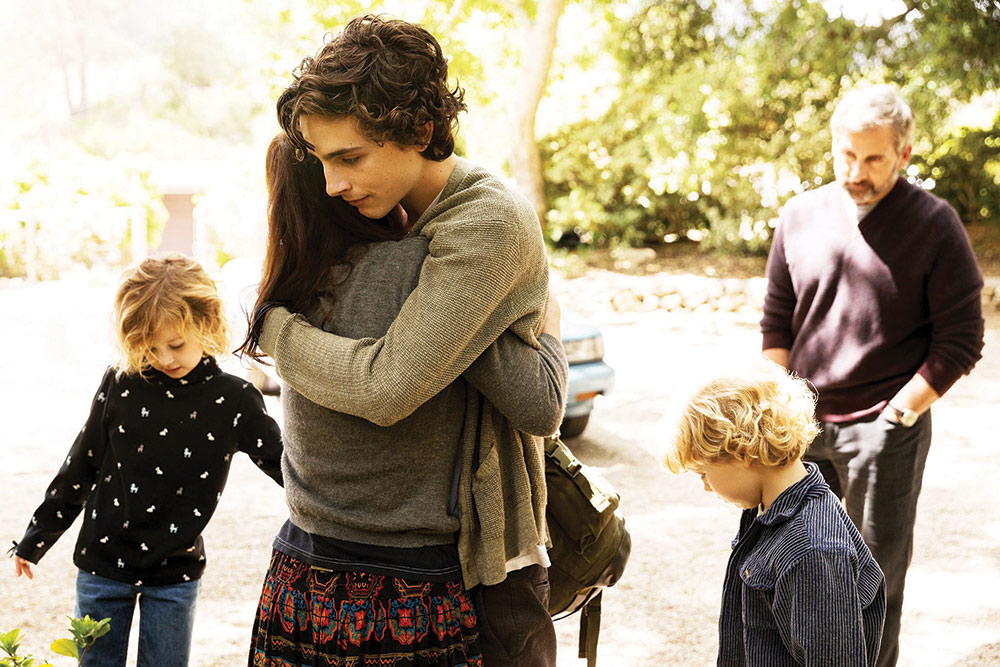 Needle in the Hay

Affluence abounds in drama based on pair of 2008 addiction memoirs

Shot in West Marin and based on a pair of father-and-son memoirs, Beautiful Boy concerns the tragedy of addiction from two angles.

Young Nic Sheff (Timothée Chalamet of Call Me by Your Name) is readying for college when he tailspins into hard partying. His concerned father, David (Steve Carell), gets Nic into rehab fast, but it’s already too late; the first half of the film commences with Nic graduating to needles.

The youth tries the good old geographical cure, by going down to L.A. to live with his mother (Amy Ryan), but returns and vanishes into the Haight, and later, the Tenderloin, in San Francisco.

When a catastrophe befalls somebody else, it’s natural to look for causes and to ask, “What did these people do that I would have had the sense to avoid?” There are three potential factors here.

The Sheffs live in one of those rustic $3 million homes off Sir Francis Drake Boulevard—fancier than the place where Jackson Maine danced with his demons in A Star Is Born. This leads us to a snap judgment of addiction because of “affluenza.” And Carell’s David is humane as all get out; maybe Nic’s call of the wild is an escape from David’s moist, buddying parenting.

The movie also suggests that rock music was a factor. Nic worships the band Nirvana, and the framed trophies of David’s writing career include Playboy interviews with John Lennon and Yoko Ono. But all of this is too simple to describe or diagnose Nic’s addiction.

The second half of the film decays into a series of broken trusts and relapses. On the plus side, Maura Tierney, as David’s wife, displays the kind of strong yet unobtrusive acting that should have made Jessica Hecht more famous.

The ever-rising Chalamet has everything needed to play Nic—he’s devious as well as beautiful, as the addiction makes him lie and steal. Vistas of the Point Reyes cliffs mirror the existential plummet an addict faces, just as they were supposed to do.

Yet the eclectic soundtrack (everything from hippie band Pavlov’s Dog to Polish composer Henryk Górecki) adds to the movie’s formlessness rather than defining it. Beautiful Boy’s sentimental heart is revealed in the soundtrack’s choice to play Perry Como shooting a tranquilizer dart into Fiddler on the Roof’s “Sunrise, Sunset.”

‘Beautiful Boy’ is playing at select theaters in the North Bay.