Hero: When Jake Straus was 14, his parents weren’t happy that he spent hours and hours in his room playing video games. Today, he’s 24, and his parents are supportive of this activity, because now GernaderJake, as he’s known online, is paid to do it. He’s a full-time professional video gamer on Twitch, a live streaming video platform, where 140,000 followers watch as he plays a game called Destiny. Viewers tip the Corte 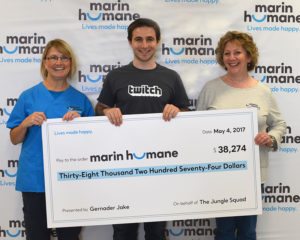 Madera resident cash to thank him for the entertainment or to entice him to answer a question about navigating through the game. Last weekend, he asked his viewers from around the globe to donate to the Marin Humane, in lieu of tipping him, and raised more than $38,000.

“I wanted to do a charity event and I noticed how strong and bonded the community is,” Straus says. A lifelong love of animals motivated him to choose Marin Humane as the recipient. Straus is proud that fellow gamers, who sometimes get a bad rap, were enthusiastic about the event. So is Marin Humane. “By far, this is the biggest peer-to-peer fundraiser (i.e., asking your neighbors to donate to a cause) that we’ve ever had,” says Lisa Bloch, spokesperson for Marin Humane. “It’s a huge boost to our budget.” Straus hopes that the success of the event will inspire other gamers to raise funds for the charity of their choice. Bravo!

Nikki Silverstein
Got a Hero or a Zero? Please send submissions to [email protected] Toss roses, hurl stones with more Heroes and Zeroes at pacificsun.com.
Previous articleFree Will Astrology
Next articleFeature: Model Partnership