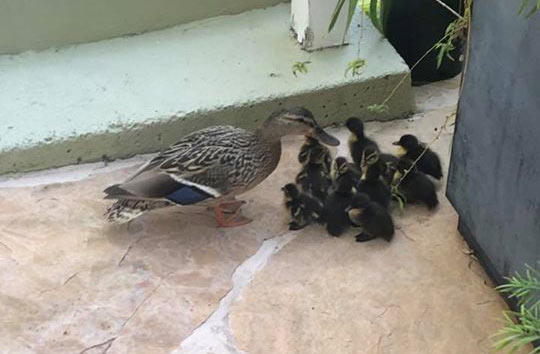 Hero
A group of jaywalking ducklings and their mama tried to cross busy Sir Francis Drake Boulevard in Kentfield last Saturday afternoon. As cars whizzed by, a good citizen attempted to prevent them from crossing, but they seemed determined to reach the other side. Fortunately, a Marin County Sheriff’s deputy rushed to the scene, blocked traffic and ushered the family to safety. Once on the other side of the street, the deputy and two citizens shepherded the ducks to a nearby pond, where they will live happily ever after.
Zero
It’s one thing to walk by a kid’s lemonade stand without making a purchase; however, it’s quite another to insult the lad running the shop. Shanna’s 9-year-old stepson asked if they could make a lemonade stand during spring break and she gave the go ahead. He felt excited about his first enterprise and Shanna felt thrilled to give him a childhood experience that most kids enjoy. Together they made the lemonade and the son baked brownies. Voila. A lemonade stand.
A customer approached the San Rafael stand and stared at the brownies for a moment. “Are these from a box?” she asked.
“I made them myself,” the boy replied proudly.
The moment began to feel tense. “They’re Ghiradelli chocolate brownies from Costco and he mixed them from a box, yes,” Shanna said.
The demanding customer rolled her eyes. “Well, no, then. I’m a chocolate snob and only eat homemade brownies made with high quality chocolate.”
With that, she turned and walked away, leaving the young fella crestfallen.
“If you can’t say something nice and supportive, don’t say anything at all,” says Shanna.
We say quit acting like a Zero at a kid’s lemonade stand. And, for future reference, most children’s ventures don’t dole out gourmet chocolate, so take your Godiva jones somewhere else.
Email your hero and zero suggestions to [email protected]

Nikki Silverstein
Got a Hero or a Zero? Please send submissions to [email protected] Toss roses, hurl stones with more Heroes and Zeroes at pacificsun.com.
Previous articleFlashback
Next articleBluesy Virtuosos