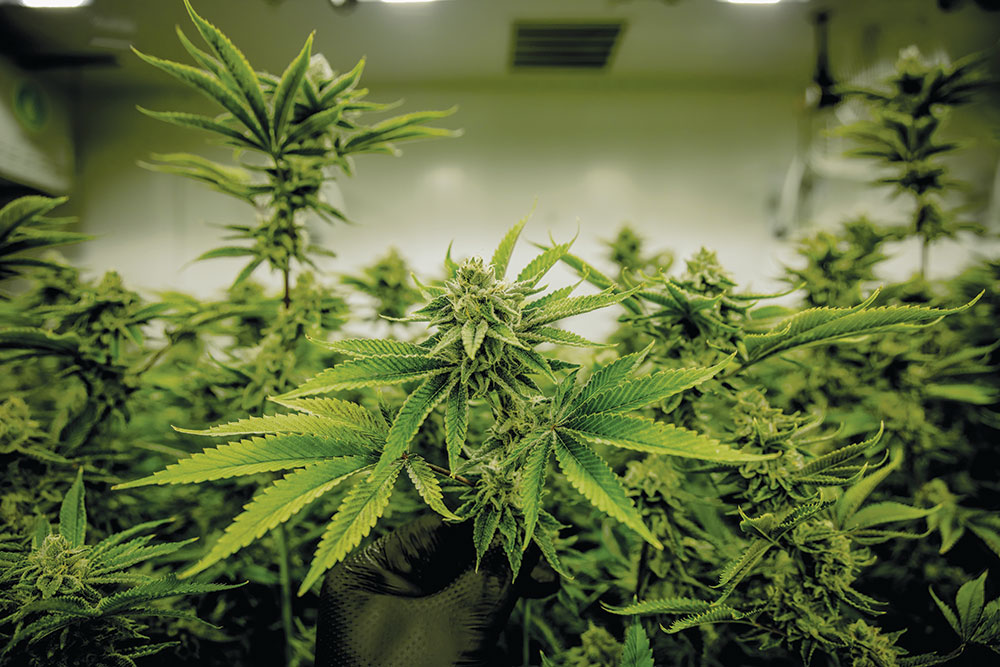 Everyone wants to wear face masks this season. Toilet paper (even single ply!) has vanished from shelves across the nation. And the legend of the once-scoffed-at hand sanitizer grows daily. Is cannabis next?

“We saw sharp daily increases in sales, number of transactions and ‘average’ transaction amounts for the five days prior to Gov. Newsom’s statewide shelter-in-place (SIP),” says Eli Melrod, CEO of Solful, a Sebastopol-based dispensary. “During that time there were many municipal and county-issued indicators that an overarching SIP order might be coming. We were not sure how to interpret the increased demand but, in retrospect, we attribute it to folks stocking up because they were not sure if they would have a dependable supply under a broader SIP mandate.”

It’s been a little over two years since weed became legal across the state of California. To date, commercial cannabis sales have raised more than $1 billion in taxes. The recreational cannabis market—one that was launched to much fanfare and with sky-high expectations—became big quickly, but never quite reached the level many predicted. Brutal competition between the legal cannabis industry and the thriving black market continues to contribute to semi-sluggish recent growth and the oversaturation of some key markets.

Now, thanks to the coronavirus, the Golden State is experiencing a cannabis resurgence. Many California dispensaries have reported record growth in recent weeks—in some cases, numbers not unlike the first day of recreational sales. But this spike might just be a COVID-19-inspired blip.

“There’s a weird mass hysteria going on now,” says Cole Hembree, owner of Curbstone Exchange, a Felton-based dispensary. “In the wake of the shelter-in-place order, we literally doubled our numbers. People are freaking out about COVID-19 and ordering more—in a stockpile-type scenario. We’re doubling our orders from all of our vendors just to keep up with demand.”

Curbstone, known affectionately as “The Curb” by the cannabis dispensary’s regulars living in and around Felton, has experienced record-breaking business this month.

“People are getting freaking nuts,” Hembree says. “We’re seeing everyone stocking up. Even the people who’ve been with us for a long time. They are buying more than usual. People are buying the same things they usually do, just way more of them.”

Bruce Valentine, a budtender at the Santa Cruz Veterans Alliance, also noticed a distinct change in purchasing habits in March.

“People who are coming into the shop are definitely stocking up,” Valentine says. “Just like with water and soap. There definitely has been consistent traffic throughout the day. Roughly the same amount of customers, just buying way more. Some people come in with gloves and masks on. It’s a huge change.”

The Centers for Disease Control and Prevention may have inadvertently encouraged this rise by strongly recommending the general public have at least a month’s supply of their medication. And then the shelter-in-place order came.

“Following the statewide SIP mandate, sales dropped to well below pre-crisis numbers,” says Solful’s Melrod. “Over the past seven days activity seems to be gradually trending up but is still below pre-COVID-19 levels.”

This is the first real crisis and economic downturn the United States has experienced in the age of legalized cannabis. Even in the face of widespread unrest and uncertainty, many involved in the local and California cannabis space are sanguine about the future. Marijuana is widely believed to be “recession proof,” and like other “vice industries” (including alcohol and tobacco), should be equipped to weather difficult times of crisis and economic uncertainty quite well.

On Thursday, March 19, Gov. Gavin Newsom issued a sweeping COVID-19 shelter-in-place order for California’s residents. To mitigate exposure to the coronavirus, and to curb the spread of the pandemic, only vital and “essential” businesses (or service providers)—like grocery stores, gas stations, banks, pharmacies and media—were allowed to continue daily operations.

It wasn’t immediately clear how the shelter-in-place order would affect cannabis dispensaries, or the cannabis industry as a whole. As officials rushed to interpret what really constitutes an “essential” business in counties across the Bay Area, dispensaries found themselves in a tense state of limbo. Because dispensaries serve both medical and recreational clients, there was ample room for interpretation.

“The City of San Francisco’s initial designation of essential businesses did not include cannabis dispensaries, which caused immediate concern and confusion for the industry,” Melrod says, adding that San Francisco was leading the thinking around responses and other Bay Area counties were generally following its lead.

Indeed, on March 16, San Franciscans woke up to the news that the Department of Health had declared: “Cannabis dispensaries and cannabis delivery services are not essential businesses.”

“Many San Francisco cannabis-dispensary owners and industry representatives contacted the city to voice their objections and, within hours, dispensaries were added to the official list of essential businesses,” Melrod says.

With curbside ordering, customers place their orders online or over the phone, and a dispensary employee meets them outside the shop to hand them their cannabis and take their payment. No browsing, perusing, smelling, handling or in-depth consulting is involved.

“Solful patrons can order ahead using our website menu at home or place it when they arrive in our parking area,” Melrod says. “Additionally, they can call us to order by phone or make a consultation appointment with one of our Health and Happiness Consultants via our website, where we offer a customer-driven appointment calendar. This ‘Solful By Appointment’ service also allows our patrons to ask questions and receive guidance from our highly trained and knowledgeable team, as if they were in the physical store.”

Overall the new programs have been a success for Solful, though Melrod is quick to acknowledge that his company is among the more fortunate ones during the COVID-19 lockdown.

As Mercy Wellness’s CEO Brandon Levine told the local daily newspaper, those companies that didn’t already have an established customer base will likely struggle due to the pandemic lockdown, “and some of them won’t make it out of this”—a sentiment Melrod echoes.

“Others have been slow to respond and may be suffering financially,” Melrod says. “Some local dispensaries have adapted quickly and well to the new—hopefully temporary—normal.”