Can spilling one’s guts to thousands of people about one’s own horror stories of sexual child abuse, drug addiction and a hopeless existence on the street change the lives of those who lived it? Not only does Marin native Nicole Boxer’s documentary How I Got Over lend proof to that, it might even change your life as well.

This is the story of 15 formerly homeless women—recently released from prison into the addiction recovery center, N Street Village in Washington, D.C. With no experience in the arts or the art of expression, the women commit to writing, acting and directing a theatrical piece about their personal traumas in front of a packed house at the John F. Kennedy Center for the Performing Arts.

After seeing this film, anyone who can walk past a homeless person hovering on the sidewalk without digging into their pockets is made of tougher stuff than we are. “I found new compassion and empathy for people on the streets,” says Boxer, who worked on the documentary for more than three years. “Now I rarely blaze by without really contemplating their situation, and I try to help, and find a friendly word if I can.” 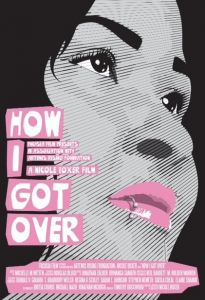 It is rarer still when one is able to entice a big-time company like Filmbuff/Cinetic, which specializes in indie movies, to get stoked enough to offer a deal for distribution, marketing and sales. The company name may not trigger the same instant recognition as the MGM lion, but their website boasts the handling of some eyebrow-raising titles: Hoop Dreams, Bowling for Columbine, Life Itself, The Square, Super Size Me, Precious, Taxi to the Dark Side, Little Miss Sunshine, Boys Don’t Cry, Exit Through the Gift Shop and Boyhood.

Boxer, 46, who grew up in Greenbrae and is the daughter of California Senator Barbara Boxer, says that she didn’t push for a theatrical release “because I believe our audience will be reached primarily through grassroots, community screenings. We are currently creating a one-year plan to get the film into recovery programs via creative community partnerships.”

A rollout in March on iTunes was coordinated with International Women’s Day and led to exposure on cable and online streaming. Boxer was invited to Joe Scarborough’s Morning Joe show and NewsNation with host Tamron Hall on MSNBC. Two of the women in the film joined her on the shows and on a panel with HuffPost Live.

They talked about their past, their performance and their present, along with a story about the first days of filming at N Street Village when the director was asked to shut it down.

“I was told we couldn’t come back to shoot,” Boxer says. “So it’s like, what did we do? Have we totally lost our opportunity to capture this story? The following Monday night, I asked if I could just sit in [on their acting class], or even better, participate, like a student. My hope was to just see if the ladies would let me into the circle to play, just like they were.

“It was Valentine’s Day. I arrived bringing small chocolate hearts for the group,” she says. “They allowed me to join in. [Acting teacher] Thomas Workman led the session. He asked what it means to be loved. Everyone answered in their own unique way. We had a wonderful two hours. I had even forgotten the crew at that point. About resolving the issue of our filming, I just let it go … .”

But the following week, Boxer got a green light. Before she could get that far, however, the support of Dr. Sushma Taylor, CEO of San Rafael’s Center Point, a substance abuse treatment service facility, was instrumental in providing support and sponsorship for the film. Boxer carried the momentum to Washington, where it took 14 weeks from day one of the project launch to the night at the Kennedy Center—six weeks from the time the play was written by the women in the program to getting up on stage.

“It never was good,” Boxer says. “It was always going to be this high school pageant, if we were lucky. The performances were train wreck after train wreck. At the dress rehearsal, no one could remember a line. But once the lights went down and there was a packed house, something magical happened and there were these incredible moments. When they forgot lines, they covered for each other. People were clapping and crying. They all stepped up. You could see on stage how they elevated themselves!”

As a result of what they felt that night, some feeling valued perhaps for the first time in their lives, the women—and splintered families—began to heal. And while the success rate is extraordinary—seven or eight even sing together in a church affiliated with N Street Village—not all of them make it.

Boxer laments, “I [had seen] one of the women not far from my house. She was clearly living in the streets and back to using [drugs]. I would love to get her into the program again, would love to help her if I can, but I’ve been advised not to. Another was attacked and stabbed and horribly disfigured, and her arm is now paralyzed.”

But for those who came out on the other side, it’s the start of a new life. They are not just poor women with pasts as abuse victims, trauma victims, teenage moms, homeless dealers, helpless addicts. Some are disarmingly bright; some surprisingly gifted.

“It’s hard to come out of that past and have any future and any hope,” the filmmaker says soberly. “How do you help a person whose first memory is sex abuse or torture? How do you give them a sense of themselves? Where are the opportunities for them?”

Boxer says that working on the film changed her—not just from a producer to a director, but in a much deeper sense. “As the women began to feel a new confidence, I felt new confidence,” she explains. “I learned who I want to be, and what I want to say. Coming home every night from N Street Village, I learned the value of what I have and felt gratitude for what others bring. It was important for me to go into that world, to leave my bubble. The women in my film are so intelligent, their style of passion and beauty so special. It really [is about] what it means to be a woman.

“Inside this project, there’s homelessness, poverty, mental illness, addiction, housing, recovery and the art. And what I truly think the message is, [is that] art can cure you.”

COMING SOON: How I Got Over,  part of the REEL Recovery Film Festival & Symposium in San Francisco (June 11 to14) will be shown on June 13 at the Smith Rafael Film Center, 1118 Fourth St., San Rafael. The screening will be followed by a Q & A with Nicole Boxer and Dr. Sushma D. Taylor, CEO, Center Point, Inc. For more information, visit rafaelfilm.cafilm.org and higodoc.com.

Next ArticleHero and Zero: A caring teller and a stubborn cat owner