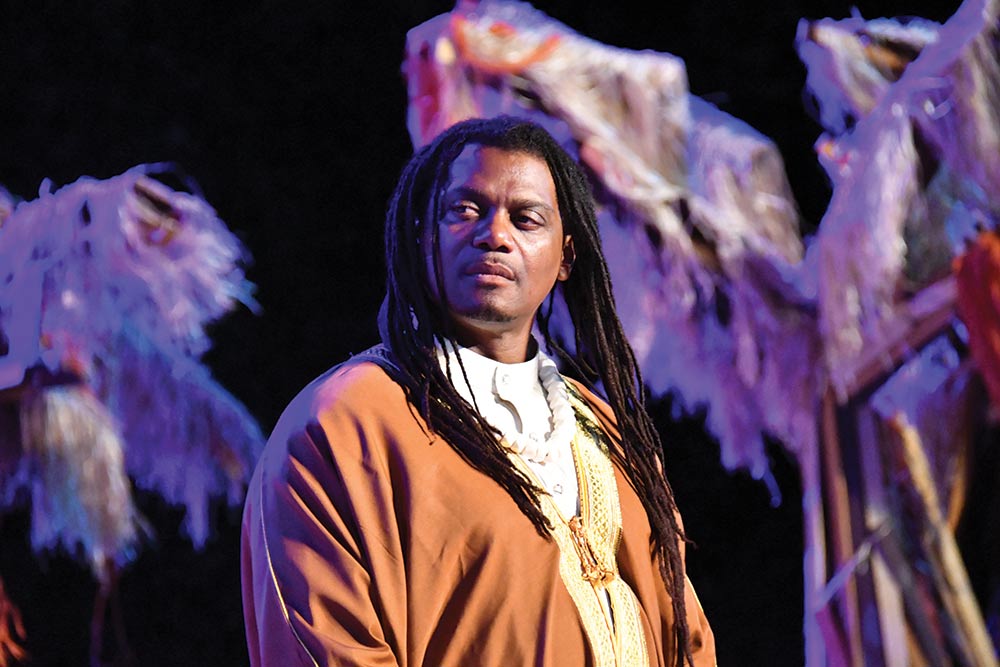 In a recent conversation about on-stage diversity (and the lack thereof in the North Bay), a local theatre company’s artistic director posed this question: “When will you know we’ve achieved it?” My response: “When I look at a cast photo and no one stands out.”

A cast photo from the Marin Shakespeare Company production of A Midsummer Night’s Dream demonstrates this but for a very different reason—all 20-plus members of the cast are performers of color.

Shakespeare’s tale of feuding lovers, angry parents, disobedient children, fairies and a traveling troupe of tradesman/actors is one of his most popular entertainments. This is MSC’s fifth production of the comedy, but the first to be directed by Managing Director Lesley Currier. She birthed her casting concept out of conversations with artist-in-residence Dameion Brown.

The show opens with the complete cast onstage, festooned in designer Regina Evans’ African-influenced garbs and surrounded by abstract trees draped in earth tones. It’s a breathtakingly beautiful vision, and a bleak reminder of the lack of color on many North Bay stages.

Theseus (Todd Risby) makes arrangements to celebrate his upcoming nuptials with Hippolyta (Eliza Boivin) when Egeus arrives and asks Theseus to force his daughter Hermia (a feisty Jamella Cross) to wed his preferred suitor Demetrius (the dynamic Marquis D. Gibson) and to cease all contact with her preferred suitor Lysander (Terrance Smith, who is terrific). Hermia’s good friend Helena (a determined Santoya Fields) further complicates things—for she is madly in love with Demetrius, who wants nothing to do with her.

With death or a nunnery facing them, Lysander and Hermia plot to escape through the woods with Demetrius and Helena in hot pursuit. Feuding Fairie King Oberon (an imperious Dameion Brown,) and Queen Titania (regal Kathryn Smith-McGlynn) interrupt their plans. The King assigns his vassal Puck (Jeremy Marquis, a mid-run replacement) to acquire a love potion with which to exact revenge on his Queen. That potion gets sprinkled into a couple of the young lovers’ eyes and the merriment begins.

Whenever those lovers take the stage the show bristles with energy as the four young performers take absolute command of the stage. I’d like to say the same for the ‘Mechanicals,’ but what is usually amusing becomes tedious with poorly paced scenes and a lead performer who lacks comedic timing. An otherwise delightful evening ends on a very sluggish note.

If they amend, I will pardon.