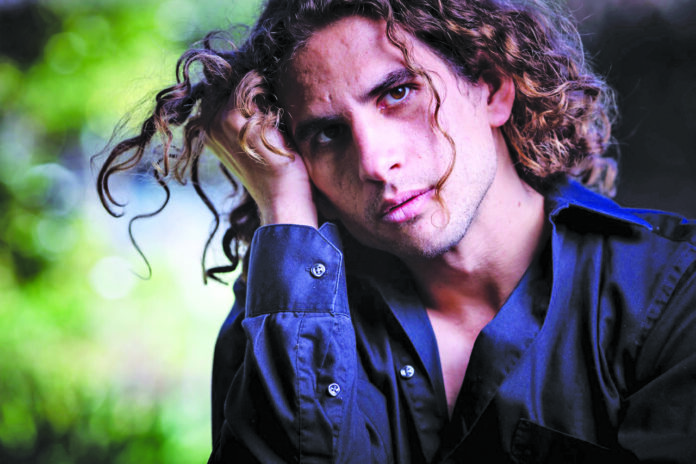 Actor Nate Currier of San Rafael has played many Shakespearean characters over the course of his 26 years of life—Romeo, Laertes, Prospero, Lord Capulet, Benedick—and almost all of those roles in what he calls “very grungy” productions.

“I’ve been working with a friend in Oakland,” Currier says, “doing these low-budget to no-budget shows in basements and backyards and whatnot. It’s a blast.”

Currier, who grew up in Marin County, attended Sarah Lawrence College in New York. While on the East Coast, he found a place with the Shakespeare Academy @ Stratford, in Connecticut. For two years, he performed in Hamlet and Cymbeline, and toured for a while, in a four-actor production of Romeo and Juliet.


“I learned a lot about working as part of an ensemble,” he says of that experience.


Currier’s interest in Shakespeare is no surprise, given that his parents, Robert and Lesley Currier, are the artistic director and managing director, respectively, of Marin Shakespeare Company (MSC). The award-winning company annually produces shows at the Forest Meadows Amphitheatre on the San Rafael campus of Dominican University. Surprisingly, few of those shows have ever featured Nate Currier.

“Well, I once threw rose petals off a balcony in Romeo and Juliet, when I was five years old,” he says.

Except for that early performance—and a later appearance as a monkey on a typewriter when he was 10—Currier has mostly resisted his parents’ regular invitations to perform on the Forest Meadows stage.

“They ask me just about every summer, but I always say no,” he admits, explaining, “I love my parents and everything. They’re awesome. I love coming down to the theater. But working with your parents can be very strange, and I basically have just always liked doing shows in other places.”

Well, nothing lasts forever, it seems. This weekend, Currier will make his MSC debut in a major role, playing Hamlet in Shakespeare’s great tragedy. The show, which kicks off the company’s 2018 season, is directed by Robert Currier. But it was Barry Kraft, a longtime Bay Area actor and frequent performer with Marin Shakespeare, who talked the young Currier into taking on the role.

“This guy is obsessed with Hamlet,” Currier says of Kraft. “He’s a total nerd, and Hamlet is his favorite thing in the universe. He came to me last summer, and he said, ‘I want you to play Hamlet.’ At first I thought he meant we wanted me to play Hamlet at some other theater company he’s associated with. But when he said he wanted to perform in Hamlet with the Marin Shakespeare Company, and that he wanted me to play Hamlet, I basically said no. But I thought about it, and eventually changed my mind.”

The reason for his turnaround, he says, was twofold. One, he relished the idea of sharing the stage with a Hamlet expert. And two, he wanted to play Hamlet while he was still in the right age range to do it.

“When I asked Barry why in the world he wanted me for this, when there are so many first-rate professionals working with this company, he said, ‘I am so tired of seeing Hamlets over 30,’” Currier says with a laugh. As written, Hamlet is a college student. “One of the reasons we’re all doing this show,” he says, “is that we wanted to give people a Hamlet that is closer to what Shakespeare had in mind.”

Now that he’s on the verge of opening the show, Currier says that he’s more than glad he reversed his position of never performing with his parents’ company.

“You know what? It’s been great,” he says, laughing. “It’s been so much smoother and more fun than I ever imagined. My dad and I share ideas, we trade thoughts back-and-forth. It’s kind of not boring, actually, how good and easy it’s been.”

As for the show—using a mix of traditional and modern costumes and concepts—Currier thinks that audiences are going to appreciate this take on Hamlet, no matter how many times they’ve seen the show before.

“Shakespeare has a way of gripping modern audiences,” he notes, “and Hamlet, especially. It’s a very contemporary story, the story of a millennial, basically, who doesn’t know what he wants from life, who finds himself in over his head with family problems. I think we bring a lot of our own selves to Hamlet, when we see it as an audience member. I’m certainly bringing a lot of myself to it as an actor.”