.Feature: The tsunami is coming! 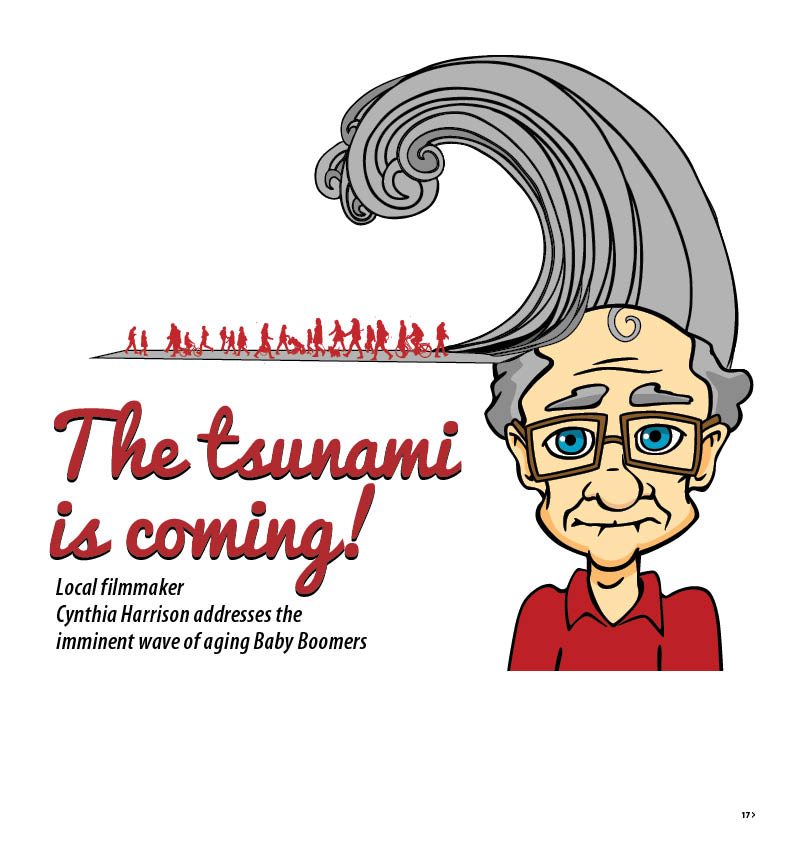 Marin filmmaker Cynthia Harrison’s documentary, Silver Tsunami, about the flood of aging Baby Boomers that’s about to hit the mainland (and the Tiburon Film Festival) with a wallop, is a shrieking alarm to brace for a global plague of impaired gray-hairs that is freaky frightening.

While we can sometimes personally hit the skids at finding a new facial wrinkle or an expanding bald spot, imagine the collective reaction to a planet growing whiskers at such an unsettling rate that it is destined to bankrupt the world and send us all reeling into oblivion.

“The Baby Boomers are the largest generation ever born,” Harrison says. “Since 2011, they’ve been turning 65 at the rate of 10,000 per day, four million per year. By 2030, there will be more than 75 million seniors in the U.S. alone—and worldwide, half a billion.”

Based in Tiburon, Harrison, an award-winning and Emmy-nominated writer and producer for several History Channel specials who co-wrote Silver Tsunami with frequent co-writer Brooks Wachtel, didn’t awaken one morning with this idea running through her head, though she admits that she was looking for something to direct. “I was driving past this mysterious building in Novato one day,” she says, “and found out it was the Buck Institute for Research on Aging—and wondered if I could volunteer for the newest anti-aging beauty treatment, or maybe even get a few samples! I took a tour, started talking to scientists there, and they spun my head around.”

The Buck Institute and other foundations on aging are hardly in competition with Estee Lauder and are not concerned about preserving beauty unless we’re talking about the ability to continue to create beautiful thoughts in old age. They are about trying to prevent us from becoming a nation of seniors who go upstairs and forget where or who we are. In 2013, there were 30 million globally recorded cases of Alzheimer’s sufferers and the number is growing exponentially. The filmmaker’s research suggests that 50 percent of people living past the age of 85 will suffer from the disease.

“Who will take care of all these seniors?” Harrison asks. “Their children? How will these children be able to work and take care of their own children? I worry someday that could be my daughter caring for me. Alzheimer’s’ cost to the healthcare system alone is now $200 billion. By 2050, it will be about a trillion dollars!”

“It will bankrupt the world,” warns Simon Melov, who heads the Buck Institute’s Genomics Core. “There will be insufficient [working age] people to fuel the economies; there will be too few people to take care of the elderly.”

“Where are they going to live?” Ken Casey, a San Rafael economic consultant, wonders. “Today you may have 20 sleeping under that bridge. Well, make it 20,000 and see what happens? You’ll have the development of shantytowns.” That is, if they’re well enough to live there without supervision.

Harrison, who self-funded a budget of $60,000 to make her compelling 23-minute film, says that wearing multiple hats (writer, producer, director) “was pretty overwhelming at times.” She credits co-writer Wachtel, editor Lou Wirth of Corte Madera and director of photography Randall Love of San Rafael, for helping to shoulder the load and work within the scientists’ time constraints. “It’s amazing to see the strides they’ve made on Alzheimer’s and Parkinson’s, trials for new meds for Alzheimer’s, Huntington’s Disease, cancer—so cutting edge, so breakthrough; they’re so close, they’re so frustrated, because grant money is the worst it’s been (in a long time).”

But there are already telltale signs of the upcoming catastrophe— people outliving their savings (50 percent of today’s retirees have less than $25,000); skyrocketing medical costs; overcrowded senior facilities; and debilitating illnesses that are crippling seniors and their overtaxed caregivers. And the problems aren’t confined to U.S. borders. Experts predict that the Silver Tsunami will begin in Asia—where Japan and China already have enormous, aging populations—and spread to Europe and the U.S.

“In Japan, more diapers are sold for seniors than for babies,” Perrott observes. “Some of the elderly are kept in basements in straitjackets because they’re demented and can’t be placed in (overcrowded) institutions.”

Multi-award winning researcher Judith Campisi adds, “It’s killing us emotionally and it’s killing us financially because we’re not prepared to deal with what happens after the age of 50, which is an accumulation of people with chronic disease.”

Gordon Lithgow, director of the Buck Institute’s Interdisciplinary Research Consortium on Geroscience, says, “The worst-case scenario is what we’re doing now—packing people into care facilities instead of trying to come up with cures because we’re not getting resources to do the research.”

He firmly believes that scientists can someday come up with a vaccine for age-related illnesses. “But you have to go to the edge of disaster before anyone in Washington is willing to do anything about it,” he contends. “We’re on track for millions of people suffering terrible debilitating diseases. And we’re on track to not take seriously the notion that we can cure these diseases.

“The only way to avoid disaster is to invest now and to invest big— to turn the research into cures,” Lithgow says. “When a tsunami is coming, you try to get people off the beach before it’s too late. The tsunami of disaster is coming—with chronic disease.”

Casey confirms that thinking. “The wave is going to hit, there’s no question about that. That’s history. That’s like trying to change gravity. It’s going to come!”

Unless someone or something pops the lid on the canned research funding, Perrott states, “They’ll be stacking us up like cordwood in the hospital hallways.”

Ask Mal more about the tsunami at [email protected]