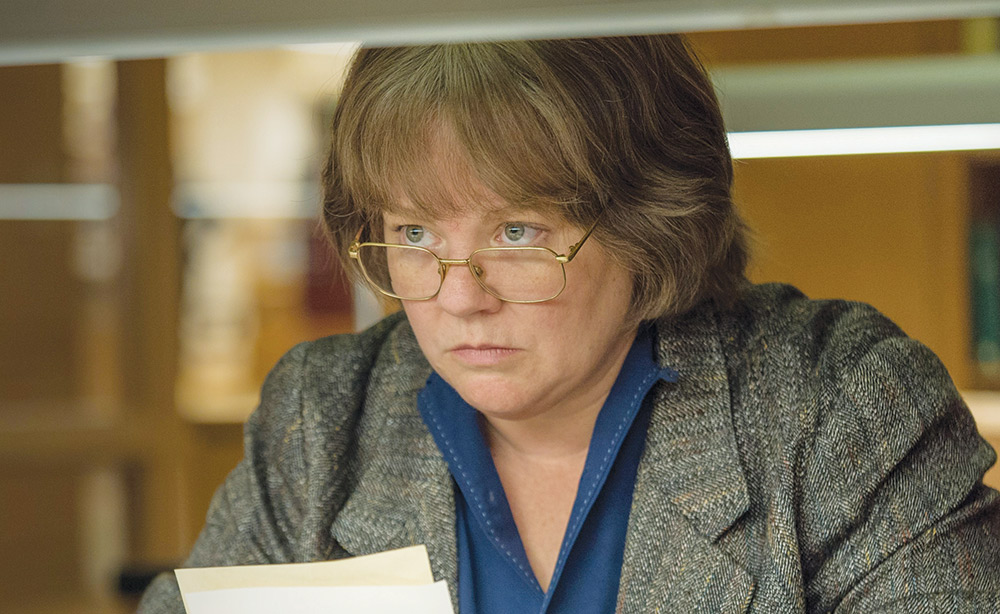 ‘Can You Forgive Me?’ plays forgery for fun and profit

God bless all the actors who aren’t there because of their looks. The literally catty tragicomedy Can You Ever Forgive Me? commences nicely with Melissa McCarthy playing Lee Israel, surly, shabby and frumpy at a publisher’s office—meeting a deadline at 3am with the help of a big glass of something on the rocks. She’s fired for drinking on the job, even at that hour. As she leaves, a younger employee mutters, “If I ever get like that, kill me.” Israel snaps back: “If you ask me nicely, I’ll kill you now.”

This true-life tale of a drinker with a writing problem is set in 1991. Print hasn’t keeled over quite yet, but Israel, who’d previously published a number of celebrity bios, is having trouble landing an advance.

When vet bills for her ancient cat press her, Israel goes to sell a prized possession: a personal note from Katherine Hepburn from the days when the two had collaborated on an autobiography.

The money is good enough that Israel falls into a unique field of crime: forging celebrity letters to sell to the local bookstores. She recruits her seedy drinking buddy, Jack (Richard E. Grant), but the scam turns out to have consequences. It also blights Israel’s potential friendship (friendship, or more) with pretty bookstore owner Anna (Dolly Wells), who has writing ambitions of her own.

The elegant soundtrack sports jazz crooner Blossom Dearie, the ill-fated country rocker Spade Cooley and a bit of Justin Bond covering Lou Reed’s “Goodnight Ladies” in a deserted cabaret. Ornery and salty as the film is, it has a cool counterpoint of loneliness to it. And it shows how lost even the recent past is—it has the sense of New York when it was New York, when it was gritty and bad, and seemingly every business sign was missing a letter or a light.

There’s been studio-generated Oscar buzz for the untrustworthy barfly Grant plays, the kind of man who introduces himself as “Jack Hock: big cock”—dodgy and gay and British and drunk, a mountebank with fingerless Fagin gloves. Why not honor him now? Grant is a world-leading actor of smooth lowlifes, including the ill-starred writer Gordon Comstock in 1997’s A Merry War, an adaptation of George Orwell’s Keep the Aspidistra Flying. Oddly, the mood of Can You Ever Forgive Me? is closer to Orwell’s book about the writing life than the confession by Israel that the film is based on.