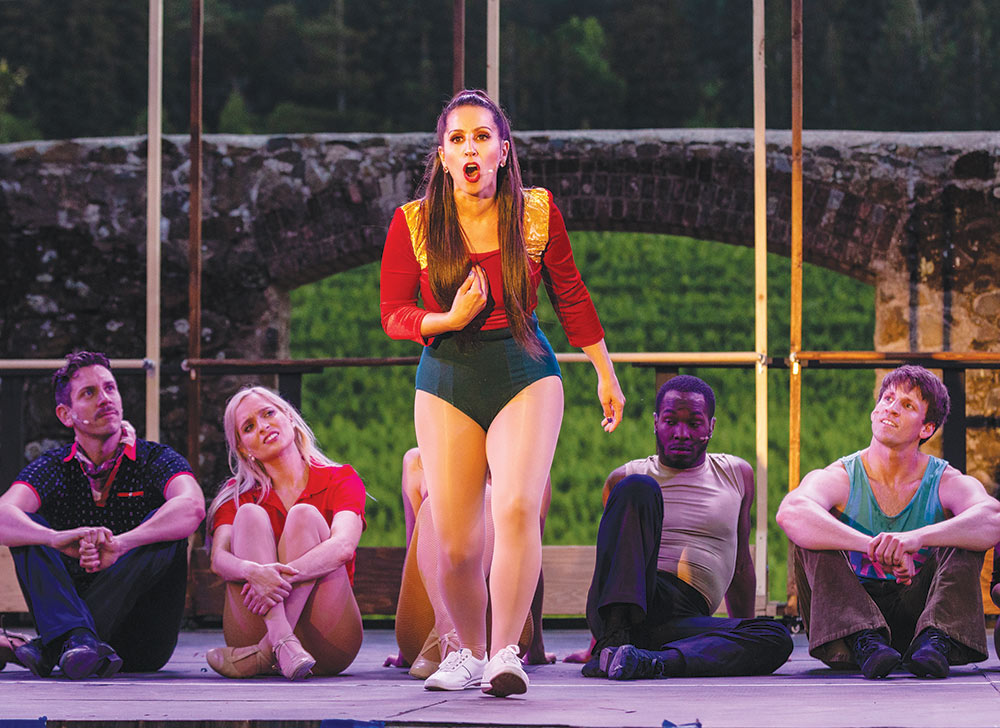 The stars come out at Jack London State Park

For eight years, the Transcendence Theatre Company has entertained local audiences with top quality musical revues featuring magnificent choreography set to a mixture of show tunes and popular musical hits. Utilizing talent with Broadway and national touring company experience, the question “When are they going to do a real show?” has lingered over the winery ruins in Jack London State Park for some time.

The answer is “Right now!” as Transcendence presents A Chorus Line, their first full-length book musical. The Pulitzer Prize and Tony Award-winning classic about dancers auditioning for eight spots in a Broadway chorus is tailor-made for this company.

Having been put through their paces by demanding director Zach (Matthew Rossoff), the 17 performers who make the first cut (the show loses a third of its diverse cast after about 20 minutes) are subjected to penetrating interviews. Who are they? What brought them to dance? What would they do if they couldn’t dance? Their stories are the show. Family problems, sexual awakenings, body image issues and more are beautifully addressed through song and dance.

In a pre-show speech, director Amy Miller shared with the sold-out audience that A Chorus Line was her favorite musical because it was about real people. That, along with the fact that most of the cast have either lived or are currently living lives very similar to the ones they portray, made the lack of credibility of several characters disappointing.

Some characters are played too broadly, while others aren’t played strongly enough. Kristin Piro delivers an excellent Cassie, but I didn’t buy her relationship with Zach for a second. Rossoff simply didn’t exude the vocal power and physical authority required of the role.

More than credible was Royzell D. Walker who, while having the least “legitimate” stage experience of the cast (he’s a recent graduate of the University of Alabama), brought a commanding stage presence, a terrific voice and dynamite dance moves to the character of Richie. Natalie Gallo is superb as Diana Morales, who regales us first with her tale of being told she was “nothing” and then with the show-stopping “What I Did for Love.”

It’s a good first effort by the company, but would have benefited from more nuanced direction. There’s great dancing, some very nice vocal work, but uneven acting. In the parlance of the show: Dance: 10, Voice: 8, Character: 6.