In Wes Anderson’s film Moonrise Kingdom, the runaways Sam (Jared Gilman) and Suzy (Kara Hayward) stumble across the corpse of a dog with an arrow in it. Suzy asks, “Was he a good dog?” Sam replies, philosophically, “Who can say?” This New Yorker cartoon caption joke was a highlight of that movie. And yet it was a tonal mistake to overlay this coolness over the crafty yet off-putting Isle of Dogs.

“Dog Flu” is a malady of the year 2038 in Japan. Kobayashi, the ominous mayor-for-life of Megasaki, takes action before the disease jumps to humans. All dogs are sent to a quarantined island. Kobayashi’s ward and “distant nephew” Atari (Koyu Rankin), as intrepid as any 12-year-old boy in any Japanese cartoon ever, flies in a makeshift airplane to the rescue of his exiled pet Spots (voiced by Liev Schreiber). It crashes and Atari is marooned. Meanwhile a pack of mutts surviving on garbage are catalyzed into action by Chief (Bryan Cranston), a stray dog for life.

Anderson’s animators work small, trying to capture a nation where people tend to swallow their emotions. But in a culture where the minimal is so important, Anderson crowds in his usual bric-a-brac—whether it’s the step-by-step business of preparing a sushi meal, or the flashcard-like listing of elements of the story, or sidebar upon sidebar.

Anderson wanted Isle of Dogs as far away from overdone emotions as possible. But the result here is something that doesn’t really arouse feelings, no matter how many animated dogs in full face stare us down, sometimes with tears in their eyes.

The borrowings from Lady and the Tramp work, when the fancy show dog Nutmeg (voiced by Scarlett Johansson) is telling Chief that she’s uncertain about finding a mate: “I wouldn’t want to bring puppies into this world.” Anderson channels the old classic cartoons, staging dogfights that are giant clouds of dust with limbs emerging from it. But he seems torn between honoring that Japanese ‘beauty in sadness’—mono-no-aware—and parodying it. 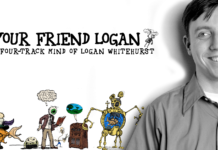 How the Coronavirus Came Between the Logan Whitehurst Doc and You