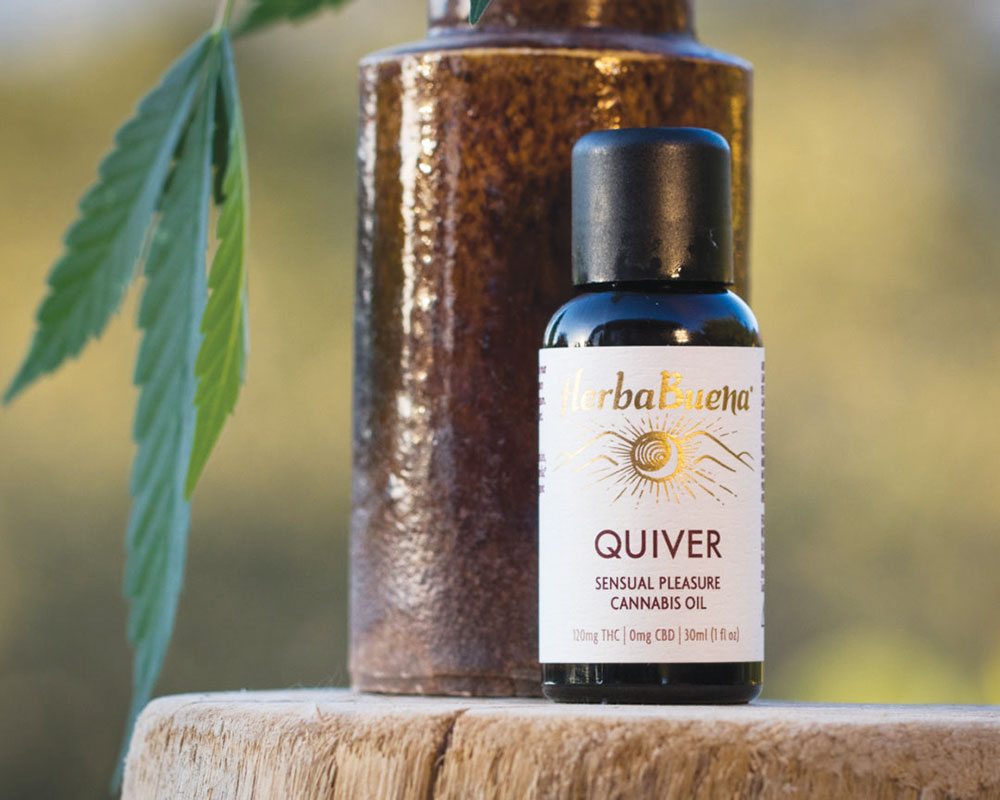 Look, it’s not like you have to use HerbaBuena’s Quiver Sensual Pleasure Cannabis Oil as suggested on the bottle. You don’t have to, as the label says, “massage daily in and around your most private parts to enhance arousal, intercourse and orgasm.”

Frankly, I don’t know what would happen if you did that on a daily basis, but the company’s website swears by the product’s sex majick qualities, and who am I to judge? All I can say is that this Ovidian oil is loaded down with pot juice—120mg of THC in a 30ml bottle? That’s the exact opposite of . . . impotent.

And, hey, it’s not like I went out and bought this stuff—so don’t get any funny ideas. The affable and engaging Michael Straus—of the Straus family of fine dairy products (and self-described black sheep of the family, he says with a laugh)—came by the office with some sample bottles not long ago, and also gifted the Nugget with a couple of Herba Buena joints: the CBD-rich Harmonize and the whole-flower sativa Rock On. Those cost $$65–$80 for a pack of five. A full bottle of the Quiver will set you back $50.

And it’s totes worth it if the critics are right. The oil’s been highlighted as the “Best Intimacy Product” by the San Francisco Chronicle, while The Cannafornian gives Quiver high marks for sustainability—though they’re not referring to sustaining your slim jim, but rather the eco-friendly manner in which Quiver is conjured.

The company’s based in Napa and specializes in biodynamic, sun-drenched cannabis that’s as close to an orgasmic certification as you get in the cannabis business. Dangit, organic certification. Where is my mind today?

And what “effect” would that be? As noted, there’s no law that says you have to nurture the nether regions with Quiver. I got some great effects by rubbing some of the oil behind my ears and into my scalp. Let’s just say that I rubbed it in, and that I rubbed it in really, really hard. I waited the requisite 20 minutes for the THC to kick in. When it did, I found myself [CENSORING] a [CENSORED] in the [CENSORED] as she [CENSORED] my [CENSORED]—all under the mistletoe, of course.

Next ArticleTorn Tickets: Part One