Meyers to NCRA: This is no way to run a railroad! 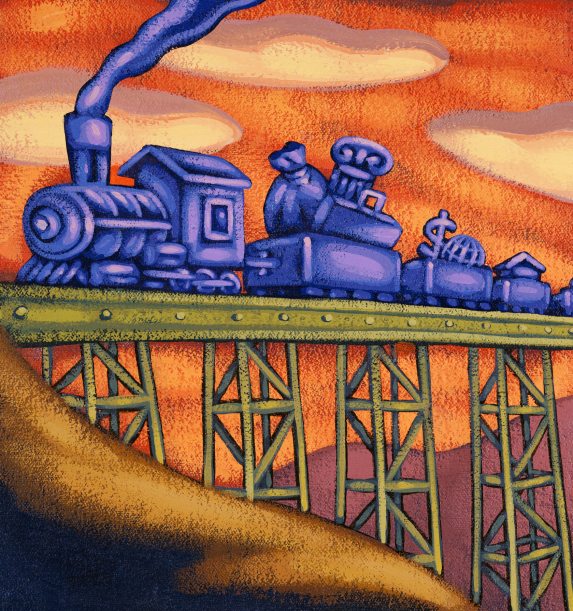 After serving six years on the board of the North Coast Railroad Authority, Bernie Meyers has decided to end his tenure on the board. Meyers, a longtime critic of NCRA and its arrangement with the Northwestern Pacific Railroad, presented North Coast board members with a strongly worded 4,400-word position statement outlining his thoughts about the past, present and future direction at the rail agency.

After serving six years on the board of the North Coast Railroad Authority, Bernie Meyers has decided to end his tenure on the board.

Meyers, a longtime critic of NCRA and its arrangement with the Northwestern Pacific Railroad, presented North Coast board members with a strongly worded 4,400-word position statement outlining his thoughts about the past, present and future direction at the rail agency.

He also presented an extensive question-and-answer statement to board members that delineates his thoughts, mostly critical, on issues he says the rail agency has stumbled over in the past as well as faces in the future.

Meyers, a veteran of the Novato City Council who served as mayor of that town in 1995 and 2005, appeared before the Marin County Board of Supervisors this week, where he submitted copies of the position statement and the question-and-answer statement. The board acknowledged Meyers service on the rail agency with a commendation that states in part, “For six years Bernie carefully and thoroughly went through all aspects of NCRA’s budget looking out for taxpayers’ money and insisting on public review.”

That’s an understatement. It’s not unfair to characterize Meyers as a thorn in the side of the rail agency. His tenure on the board, especially in his last few years, was marked by strong criticism of the rail agency and its lease with Northwestern Pacific, an arrangement he has called “a sweetheart deal” with insufficient benefit to the public.

The supervisors will appoint another Marin resident to take Meyers’ seat on the rail agency board. Jerry Peters will remain on the board of the nine-member organization; he’s the second board member from Marin.

The California Legislature formed the North Coast Railroad Authority in 1989 as part of an effort to ensure continued viability of railroad transportation in the state. A companion bill passed both houses of the Legislature and would have provided funds to create rail transit on the proposed line, but Gov. George Deukmejian vetoed the legislation, leaving North Coast Railroad Authority as an unfunded mandate. It also left the NCRA with an idea for a railroad but no actual railroad. That didn’t make it easy to attract an operator to run actual freight.

After looking for a railroad operator, NCRA cut a deal with Northwestern Pacific in 2006. North Coast Railroad Authority agreed to a 25-year lease with Northwestern Pacific (NWP) that allows NWP to renew for up to 100 years. Meyers has called attention to the terms of the lease for years, especially the section covering payments to the rail agency: “NWP shall make annual lease payments in the amount of 20 percent of its net income, commencing the first year after NWP has generated positive net income in excess of $5 million.” Meyers says the lease arrangement lacks any meaningful oversight.

Meyers has continually called attention to the lease, which he says is lopsided in favor of Northwestern Pacific. He also points a questioning finger at the relationship between Northwestern Pacific and NCRA Executive Director Mitch Stogner. Meyers isn’t the only one who questions the relationship between the railroad authority and NWP. To start with, John Williams, the CEO of Northwestern Pacific, is a former executive director of NCRA. Doug Bosco, former congressman representing the North Coast, joined Williams as an investor and NWP legal counsel. Stogner worked for Bosco as an aide when Bosco was in Congress. No wrongdoing has been documented. But critics of the lease between NCRA and Northwestern Pacific still question whether the deal should have merited oversight.

Then there’s the AP story: Critics cite a 2001 piece that recounts how Gray Davis was in the governor’s office when the state funneled $60 million to reopen the Northwestern Pacific line. Shortly after the state decided to pour money into the effort, shippers, who stood the most to gain, contributed more than $60,000 to Davis’ campaign fund. Perhaps not wrongdoing—but critics say it’s an example of how influence works.

The suit could have a major impact on the long-term success of Northwestern Pacific. The railroad currently runs a modest number of rail cars on 62 miles of track between Windsor and Napa County.

Northwestern Pacific says it wants to run from Samoa, near Arcata in the north part of the state, down through Marin and Novato and on to Schellville, where the line connects with the national freight rail system. The rail line serves mostly ranchers now, but critics say the real money is at Island Mountain in Trinity County. Between 1914 and 1930 substantial amounts of copper, silver and gold were mined there, and the area still has untold tons of valuable aggregate. Trains could haul that aggregate to market. Northwestern Pacific says it has no immediate intentions of extending its tracks north to tap Island Mountain riches, but critics just don’t believe the pronouncement. The environmental groups worry because the rail agency and NWP completed an EIR that investigated only the southern section of rail line and rehabilitating track and running trains to the north, to Island Mountain, would do severe environmental damage.

In leaving the board with his parting communications, Meyers criticized the way the North Coast Railroad Authority interacts with board members—or fails to interact. “The NCRA is run by two members of its staff, and they play their cards pretty close to their vests. The board has very little time in which to make a decision and insufficient input on which to make a decision.” As with many joint-powers agencies, the NCRA board has members that come and go. That leads to a staggered institutional memory. “As I leave the board, there are only three of us that have been there the six years that I have been there. One person on the board has been there only a few months. When I joined the board, what did I receive? A packet telling me everything that went on? No. I received the environmental consent decree [between the state and NCRA], and I received the lease. That’s it.” Meyers says an insufficient institutional memory at NCRA is a big reason why he produced the lengthy position statement as well as the question-and-answer statement.

Meyers says the time has come to leave the board after trying to make a concerted effort to produce change. “I think the NCRA should be a viable organization in charge of the shortline railroad. My being on the board didn’t seem to achieve that in the six years I was there, and certainly not in the last year or two or three. I can’t understand why another two years [the term of board members] in that position would get me any further.”

There’s always been tension between Marin and the counties to the north about differing methods of running a railroad agency and a railroad. The city of Novato sued over what it said was the inadequate environmental report because the report failed to take into account effects of running trains through town on the way to Napa County. The city and the rail guys settled after an agreement was reached about quiet zones.

The North Coast Railroad Authority needs a healthy dose of transparency, according to Meyers, a prescription not evident at the moment. In Meyers’ estimation, a poor NCRA attitude affects the public’s right to know in Marin about what happens at the rail agency. The board is supposed to hold rotating meetings in the four counties it represents. “It hasn’t met in Marin all year,” says Meyers, which shows you the disdain the board has for Marin County.”

In leaving the board, Meyers plants a suggestion of how to ensure that the arrangement between the railroad authority and Northwestern Pacific Railroad truly benefits the public—rather than just the rail guys as well as ranchers along the line who get their freight hauled. He calls on the NCRA board to ask a member of the Legislature, possibly and notably Marc Levine (who represents Marin) to ask the state Joint Legislative Audit Committee to look at NCRA and NWP and the rail line to determine if anything should change to better the public’s benefit.

An alternative, says Meyers, would be to ask for an outside independent and unbiased study “to tell [the board] if what they have set up here is fiscally prudent and whether it will redound to the public benefit or not.”

The questions-and-answer statement Meyers presented to the NCRA board and to Marin supervisors includes many other issues. Needless to say, other board members and officials at the railroad authority and NPW have views divergent from those of Meyers. Here’s a sampling of Meyers’ Q&A:

How do the lease terms compare with similar leases between state railroad entities and private operators?

Not favorably. Generally, others are for terms of between five and 20 years, with possible renewals if conditions are met. For example, a 2007 Ohio lease provides for 5-year renewals if various conditions are met, including a review of shipper satisfaction, safety, car loadings, track maintenance and financials. Then there are best practice provisions, energy efficiency provisions, and conflict-of-interest provisions.

Did NWP make some payments to NCRA besides those required by the lease?

Was the line recently repaired?

How much was paid for the rehab?

NCRA says it cost $68 million taxpayer dollars. Another $3 million was spent by NWP but most of that has been reimbursed with taxpayer funds.

Was the NWP money spent to cover work done after a public bidding process?

No. NWP was given a no-bid contract.

Was the NWP work completed in accordance with the initial contract price and timeframe?

No. The final cost was about three times the initial amount and instead of three months it took over a year.

Did the board audit the billing?

No. It is a sorry story. Don’t get me started.

Was that the last no-bid contract awarded to NWP?

No. NWP has been awarded a no-bid contract for the cleanup of toxics at the Ukiah Depot.

Looking at its finances, it appears to be near bankruptcy. The current budget can only be balanced by assuming that significant obligations will not be paid. Prior years’ budgets showed expenses well in excess of revenues. It has a long list of creditors with claims well in excess of NCRA’s yearly revenues.