.One Foot on the Gas

Marin through the rosy lens of ‘Red Rocker’ Sammy Hagar 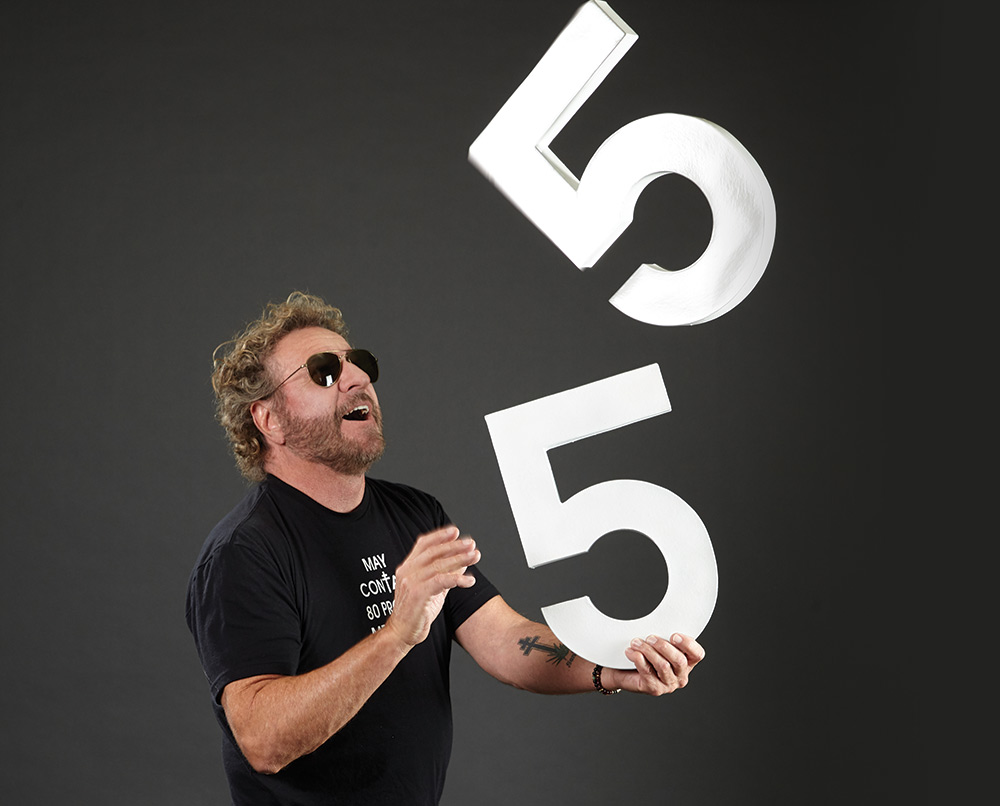 Sammy Hagar’s not your stereotypical Marin rock icon, neither brooding, dark metal type nor hybrid-driving flower of the psychedelic revolution. Nonetheless, he was the screamingly obvious choice to commemorate the 55th anniversary of the Pacific Sun. Do we need to explain why?

Sitting at a wooden table in a studio tucked away in one of the county’s industrial zones, Hagar discussed the song from his pre-Van Halen solo days that became an anthem for personal frustration with government overreach into everyone’s daily lives back in the K-car era.

The universally violated National Maximum Speed Law, signed by President Richard Nixon in 1974, turned straight arrows into scofflaws and didn’t save much in the way of lives or imported Saudi oil.

“It’s ’83, so we go on vacation to Africa. You know, safari and all that stuff. I was gone for six weeks. Flew from Nairobi to London, changed planes, got on the Concorde, flew to New York City. Got on a plane, flew to Albany, N.Y. ,” Hagar says.

“Two o’clock in the morning, rented a car and was driving to my home in Lake Placid. I had a log cabin up there because my boy Aaron went to school at North Country School in Lake Placid.

“I’m going, ‘Man, I can’t drive 55. What the hell are you talking about?’ It’s like two o’clock in the morning, there’s nobody on the highway but one cop hiding in the bushes. So, I started laughing about ‘I can’t drive 55,’ and I started writing the lyrics while he was writing the ticket.

“I got to my log cabin, I walked in the house, four in the morning. . . . I pull out a guitar and my little tape recorder, and I wrote that damn song. It’s a pure protest song. That’s what’s so funny about it. Everyone thinks it’s such a gimmick. This is a protest song. I was pissed.

“My insurance was $124,000 a year in 1983. I had 43 violations. My license was taken away three times. Never drunk driving, nothing like that—it’s always just speeding.

The Southern California–bred Hagar arrived in San Francisco in 1968 to play with a cover band and moved to Marin in 1972 when he joined the group Montrose.

“My bands were never part of the San Francisco scene,” he says. “People don’t realize Montrose was a San Francisco band in 1972 in the middle of all that hippie thing. We were not hippies. We bordered on glam rock, but we were metal punks. You know we really had attitude where I didn’t talk to the audience.”

Hagar broke with Ronnie Montrose’s “no smiling onstage” direction. “Ever since I left Montrose, my thing is no frowning onstage. Everybody, you smile up there! Make these people happy.

“You’d walk into that little coffee shop and Bill Graham would be telling stories to Carlos and Jerry would be smoking a joint out in the parking lot. Allen Ginsberg, all those San Francisco guys, they’d come over here. I honestly can’t tell you how many times I saw Grace Slick or Carlos or someone at the grocery store or anywhere you went.

“It changed a lot. When I moved there, from my house to the freeway, there were no frigging stop signs. Now there’s signals and traffic jams. It’s more like Carmel, but it’s still a cool place to live.

“In the old days, Mill Valley was very unpretentious. No one dressed up. I used to go around looking like a rock star and get downtown and start feeling stupid. I’d say, well, shit, maybe I’m overdressed. I’ve got a shiny shirt on. Now it’s like very, very upscale.

“There’s that division. There’s the old time hikers with their little sticks and their Adirondack kind of clothes hiking up and down the mountain, and then the bikers come flying down and they want to take their cane and stick it in their spokes. There’s naturalists and then there’s some aggressive, go-getter dot-com people.”

Looking tanned and fit at 71, Hagar still performs festivals and makes music in his studio with Chickenfoot bandmates Joe Satriani and Michael Anthony, but has retired from touring.

Hagar and celebrity chef Tyler Florence opened the El Paseo steakhouse in 2011, but their visions didn’t align. Hagar split with Florence in 2016 and closed the restaurant in July. He’s in the process of selling to a local operator.

Hagar’s other business ventures these days include marketing a “mezquila” mix of two popular distilled agave spirits, mezcal and tequila, as well as Sammy’s Beach Bar Rum, distilled in Puerto Rico. As he did with the Cabo Wabo artisanal tequila brand that he sold to Gruppo Campari for more than $90 million in 2008, Hagar involves himself in the product formulation and branding rather than just lending a celebrity endorsement.

George Clooney’s billion-dollar exit last year from his Casamigos tequila raised the stakes with an added zero, and as a celebrity spirit brand pioneer, the Red Rocker could be headed for another second win if macadamia-flavored sweet rum (sips well over ice) strikes a chord with the imbibing class.

These days Hagar says he gets the most satisfaction from his philanthropic activities. He supports food banks and local charities where his businesses are located, and has medical costs for procedures such as kidney transplants for people who need operations and cannot afford them.

“That’s why I still do things. Otherwise, I’d probably just go away and hide out in some beautiful place.”

Luckily for Hagar, who grabs some unlabeled bottles left over from a mixology session as he heads home from his studio, he can have his margarita and drink it too.

Next ArticleLong Live the Alt-Weekly