Lawsuit threatens future of cattle at Point Reyes National Seashore—or does it?

Litigants in the battle over the future of cattle grazing on the Point Reyes National Seashore will head to federal court later this spring.

A lawsuit filed by a trio of environmental organizations in February is aimed at the National Park Service (NPS) and Cicely Muldoon, superintendent of the park. Its stated purpose is to force the NPS to better manage the 18,000 acres of dairy and beef cattle that graze the park’s pastoral zone, along with the not-so-occasional tule elk that wander into those lands, located in the southern end of the park.

But the stakes are potentially higher. A successful outcome for the plaintiffs, says Huey D. Johnson of the Mill Valley–based Resource Renewal Institute, could impact other cattle operations, including ranches located within the Golden Gate National Recreation Area and beyond.

“Sure. It will transfer over to the nation,” says Johnson, a local titan of environmentalism and a former state resource secretary under Gov. Jerry Brown in the 1970s. His organization is joined in the suit by the Center for Biological Diversity and the Western Watersheds Project. “There are a number of national parks with cows,” Johnson says, “and powerful special interests that promote grazing in federal landscapes.”

The suit calls on the NPS to update its Point Reyes documents, especially the 1980 General Management Plan to include, for example, an environmental impact review of the ranches. The lawsuit claims, among other negative impacts, that the cattle cause erosion and manure impacts salmon downstream.

Following hard on the hooves of a bad-blood lawsuit against the now-closed Drakes Bay Oyster Company, the latest Point Reyes lawsuit comes as the NPS is working on its Ranch Comprehensive Management Plan as part of its responsibilities under the National Environmental Policy Act.

On that front, the lawsuit appears to demand the NPS do what it is already doing—come up with a plan for managing the ranchlands—with the kicker that there are still too many cows (about 6,000). The park’s point-person on ranching issues, Melanie Gunn, couldn’t comment on the pending litigation, but NPS officials have stated publically that it is determined to keep the ranchers in the park.

While the battle to save Drakes Bay is over, those iconic “Save Drakes Bay” signs are still up all over the North Bay—as are signs along ranch fences around West Marin that call for more fencing in the park to keep the elk and cow herds separated.

The oyster and cattle suits appear similar—commercial activity undertaken with ad hoc leases on public land—but the potential elimination of cattle ranching in Point Reyes is on a higher order of magnitude when it comes to the potential economic impacts.

Ranching advocates highlight that the milk that flows from the Holsteins and Jerseys is some of the finest and that the ranches support numerous other jobs in the area—from truckers to veterinarians to graphic artists to the Marin Sun Farms restaurant and retail outpost on Highway 1 in Point Reyes Station. Marin Sun’s ranch is located in the park.

Johnson says he loves his beef and his ice cream, too, but that’s not the point. The point, he says, is to enforce accountability on an agency that’s mucked through its management of the cows (and the elks) for decades.

Johnson says that opposition to the suit is coming from a “funny little cabal of dairy lovers out there. They’ve gotten well-rooted, the local press often favors them, they are nice people and it seems like a good idea. I would say that there’s been something of a public relations war, not really a war but an ongoing struggle, and a handful of well-meaning elderly environmentalists have long ago fallen in love with dairy cattle.”

But it’s not just the green elders of Inverness who are supporting new leases for the ranchers; the West Marin Environmental Action Committee was a driving force behind the Drakes Bay lawsuit, but is not onboard with the current litigation. The former executive director, Amy Trainer, moved on in October, and the current director, Morgan Patton, says the organization is supporting a pledge made to ranchers to grant longer leases made by then–secretary of the interior Ken Salazar as the Drakes Bay battle waged.

To ease the concerns of ranchers that they were next on the get-out list—including Kevin Lunny, who ran Drakes Bay and operates one of the cattle ranches in Point Reyes National Seashore—Salazar said he would work on securing 20-year leases for the ranchers.

“We support the decision,” says Patton of the Salazar pledge, in an interview at the Environmental Action Committee office in Point Reyes Station (which was vandalized during the Drakes Bay fight). The ranchers are now on ad hoc, year-to-year leases which can both foster financial insecurity and don’t provide a whole lot of incentive to properly manage one’s ranch.

The organization, says Patton, is working with the park and ranchers on the management plan.

Patton notes that a key difference between the respective suits was that Drakes Bay Oyster Company was operating in an area with a wilderness zoning designation; the cattle are all on land zoned as pastoral in the enabling legislation that gave rise to the Point Reyes National Seashore in 1962. In other words, the cattle occupy land that was originally zoned so that they could occupy it.

“We have to make our decisions based on the law and policy,” Patton says.

Johnson sees things a little differently when it comes to Salazar’s deal with the ranchers: “I want that land to be managed properly, I want there to be grass growing, and I don’t have time to fool around with their demands for longer leases and whatever.”

The Marin Agricultural Land Trust, also based in Point Reyes Station, fosters voluntary agricultural conservation easements aimed at preserving agricultural and keeping development at bay. Executive director Jamison Watts says the parkland ranches are a vital resource for the area and the world at large, providing not just superior organic, GMO-free products, but a model for how to do it on environmentally sensitive land. 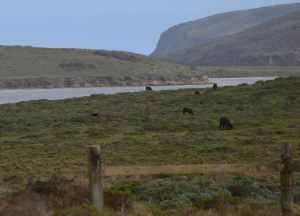 He readily acknowledges that park service management of cattle isn’t perfect, but says that’s exactly why they are working on a ranch-management plan. A sustainability framework in the park would be economically viable (if not profitable to the ranchers), Watts says, not to mention “environmentally sustainable, and contributing to a high quality of life for the community.”

“We have a great opportunity to continue demonstrating sustainable ag in Point Reyes,” Watts adds, noting that the cattle in the seashore and in Golden Gate National Recreation Area comprises 20 percent of Marin County’s annual agricultural yield of about $100 million.

“We’re not saying anything about getting any cattle out of there,” Johnson says of the lawsuit.

“We want the park service to do what they haven’t done, because they are in the pocket of the dairy interests.”

In Johnson’s vision of a properly managed national park, Point Reyes National Seashore would resemble an English park in the plains, which often have, he says, “a few cows grazing out there with the grass up to their belly. Here, you see pictures of pastures that are just mud and manure with no grass on them.”

He sees a future Point Reyes National Seashore with ranching continuing on a “much more reduced scale—they’ve got several times the number of cattle that should be on that land. The parks service should tell them to take care of the land, but they don’t.”

The lawsuit comes as the NPS’ management of the elk herd has itself been under a cloud of criticism. Johnson says his impetus was the plight of the reintroduced tule elk that also live and graze in the park; many dozens died during the drought.

“I was so upset that the parks service [said], ‘Yeah, we lost 250 elk, they died of thirst and hunger.’ What the hell kind of organization are they running when animals are dying of thirst?”

Anti-rancher activists have also raised concerns around the killing of elk that were culled by the NPS because they’d contracted Johne’s disease, an illness that leaves the animals emaciated.

Marin rancher and attorney Nicolette Hahn Niman has been speaking up on behalf of the Point Reyes ranchers and says that concerns for the elk and the culling of diseased animals have been conflated into accusations that the ranchers are themselves calling for the eradication of the elk, serving a cow-vs.-elk dynamic that’s convenient for the plaintiffs but isn’t backed up by the facts.

She cites a recent Wall Street Journal video that features one of the plaintiffs and “an almost exclusive focus on the elk. Is this what is actually motivating these individuals? Because I was really surprised at how central it is to their argument. Ranchers as a group are not advocating for the elimination of the elk and have repeatedly called for nonlethal methods to get rid of them when they have to.”

In a 2014 letter to Muldoon, the Point Reyes Seashore Ranchers Association said that the elk and cows ought to be kept apart from each other. There’s no mention in the letter of killing the elk to achieve that end. That letter also goes to lengths to talk about best management practices, including, for example, “managing the rangelands in a fashion proven to sequester carbon.”

Properly managed, grazing animals can help trap climate-changing carbon in the soil. Hahn Niman says that while there is real concern about what the suit might mean for ranchers, she doesn’t anticipate that it will go anywhere—though as an attorney, she says you never know.

“There is a distinct possibility that it will be dismissed fairly early on,” she says. “I know what the park’s been doing to update the management plan, and it’s a lot.”

Hahn Niman questioned the wisdom of filing a lawsuit about a particular set of concerns in Point Reyes National Seashore, while the plaintiffs concede that the suit, if successful, would create a precedent that could be applied elsewhere.

“If you read the lawsuit, it’s not that ambitious—manage it better, the park’s not keeping its management plan up to date—but when you understand that the plaintiff wants to get all the cattle out of all [public lands], the ranchers are right to be alarmed.”

Hahn Niman says she is only speaking for herself and her husband, sustainable livestock pioneer Bill Niman, as she notes that ranchers are “extremely concerned about this lawsuit and rightly alarmed because not only is [Johnson] making this statement, but the two other groups—that’s all they do is try to get grazing out of public lands, and there’s no question that’s what is motivating the lawsuit.”

Johnson is standing his ground. He has an expert opinion on grazing, he says, which found Point Reyes National Seashore to be “the worst example of overgrazing that he has seen.”

The 83-year-old Johnson is looking forward to his day in court. “We obviously had such difficulty communicating with the parks service, given the interests and their special deal with the ranchers. There was no way to do this except to say, ‘Go talk to a federal judge.’ It’ll do them a world of good. I look forward to the process.”

Next ArticleUpfront: After the fall