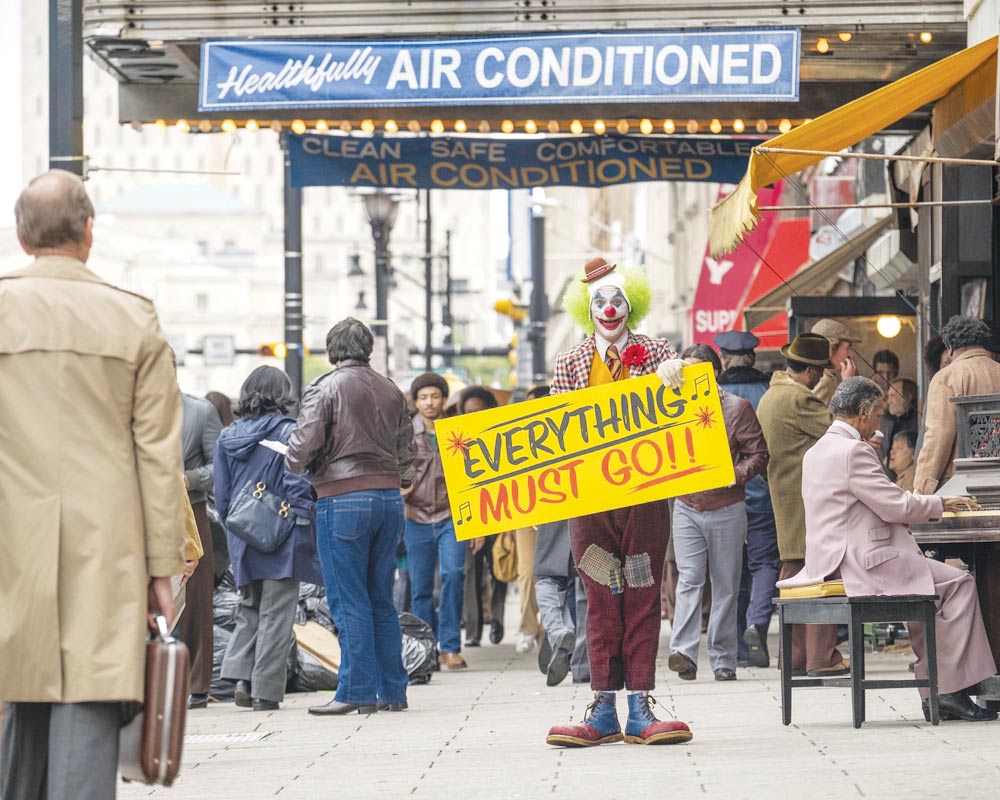 Budget cuts on Gotham City’s mental health program end Arthur’s prescriptions for seven different medicines; he carries a dog-eared card explaining his fits of uncontrollable laughter. Arthur nurses his shut-in mother Penny (Francis Conroy), who watches a Johnny Carson surrogate (Robert De Niro) while bathed in the light of the TV. Penny writes unanswered letters to the wealthy, thug politician Thomas Wayne (Brett Cullen) who promises Gotham City, “Only I can save you.” Penny once worked as a domestic at Wayne Manor. From that point on her story gets unreliable.

Arthur works at a rent-a-clown agency with some other grim types derived from the donut-eaters in Taxi Driver—“Another day in Chuckleberg!” one says. He sign-spins, or prances in a cancer ward in front of bald, hollow-eyed kids. His vision of a grander career consists of a slot at an open mic comedy club, and he collects gags in his smeary notebook: “Why are poor people so confused? They don’t have any cents.”

Nihilist clowns called punk rockers made New York almost this bad in the mid-1970s. So did anti-comedians, like Michael O’Donoghue. “Mr Mike” would have enjoyed Fleck’s idea of a knock-knock joke: “Who’s there?” “The police. Your son’s been killed by a drunk driver.”

Arthur’s performance skills interest pale, little Bruce Wayne (Dante Pereira-Olson) wandering alone on the grounds of his Manor; luring him close enough to use his fingers to draw the stunned child’s mouth into the rictus of a smile. It’s all part of Arthur’s transformation into a slow-dancing death clown, culminating with the film’s most lyrical sequence, a soft-shoe down a littered, ominous staircase.

Phoenix’s maniac is never boring, always revealing new layers of suffering; it’s even remarkable what he does with the cigarettes he chain-smokes. When he finally finds his way as the Joker, his voice is neither young nor old, but pedantic—like a put-upon 12-year-old.

As for whether Joker is what Luis Bunuel called his midnight-movie Andalusian Dog (1929), “a desperate, impassioned call to murder,” something that copycats will answer…given all the essays about the irrelevance of movies, it’s a sick joke that, for once, the influence of films still has a power to be feared. This city-revenge film is smart enough to know that squalor, like waste-water, flows downhill: Arthur’s first victims are some rowdy drunk stockbrokers who kick him around for laughs.

Among the last images is a tableau familiar from this saga: a little boy in a filthy alley, standing between the bodies of his two parents. As staged here, it leaves us with no hope, no premonition of dashing Bat-adventure. All that can come after this is just a feedback loop of senseless loss and suffering.

‘Joker’ is playing in wide release.