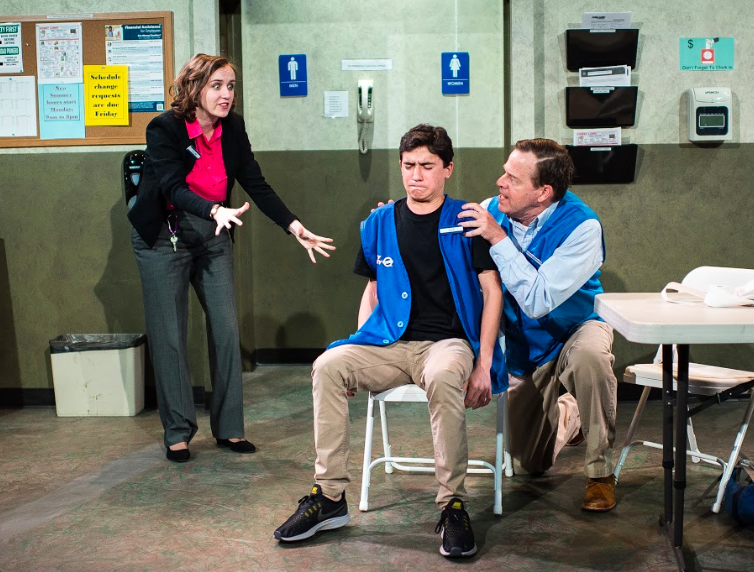 Who knew that an employee break room could be such a fertile setting for compelling theatrical drama?

First, David Harrower set his harrowing Blackbird in a nameless one, then Samuel Hunter (The Whale) set his fascinating A Bright New Boise in the break room of an Idaho Hobby Lobby. The College of Marin brings Boise to their Studio Theatre through May 19.

That break room is where Will (Steven Price) is finishing up a job interview with manager Pauline (Haley Skinner). Will is new to Boise, having relocated from a small town near Cour D’Alene. For reasons of which we’ll soon become aware, he’s seeking a “fresh start.”

He’s seeking something else, too. He’s seeking to reconnect with his son Alex (Alex Cook), who he gave up for adoption as an infant and who happens to work at the Hobby Lobby. The revealing of his connection to Alex on his first day of work sets the drama in motion that will soon involve Alex’s brother Leroy (Ryan Pesce), a co-worker (Katherine Rupers) and the end of the world. What at first look seems to be a standard workplace comedy/family drama soon turns very dark as the story unfolds.

Hunter’s play turns out to be a fascinating look at what people need to get through life. For some, like Pauline, it’s a laser-like focus on a job. For others, it’s the escape that reading or art or music provides. For Will, it’s his faith. That faith has been shaken but not enough to shake his belief that the end is near and that life will be better when the Earth has been swallowed up in the Apocalypse – and he wants that Apocalypse now.

Director Lisa Morse has gathered an excellent cast to tell this story starting with local theatre veteran Price. He earns the audience’s empathy before slowly peeling back the layers of his character and revealing a scary side. Skinner is quite good as the profane corporate leader who is not pleased at the imbalance Will has injected into her successful retail eco-system. Cook as the troubled youth, Pesce as his protective brother, and Rupers as a co-worker with her own set of beliefs all do well.

Wickedly humorous but ultimately disturbing, A Bright New Boise gives us a glimpse into the soul of a man who spent so much time worrying about an after-life that he failed to live the one he was given.