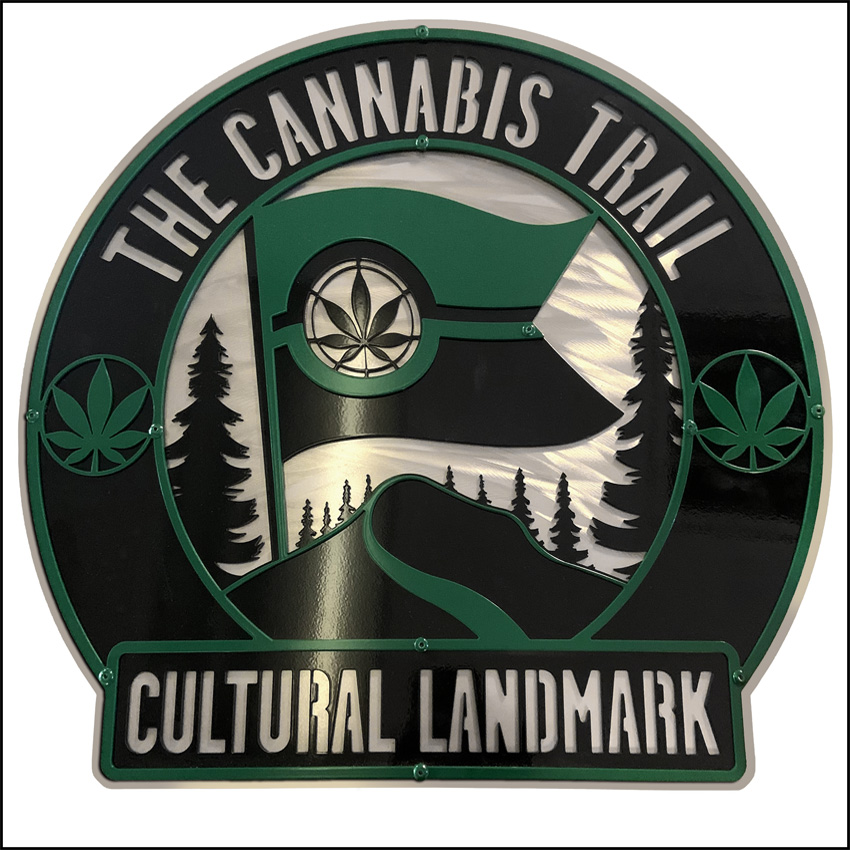 The public is invited to attend an unveiling ceremony for two new Southern Humboldt County Cultural Landmarks along The Cannabis Trail on Saturday, June 19, 2021. Festivities will run from 1:00 – 2:00 p.m. at the Hemp Connection, 412 Maple Lane, Garberville, CA 95542.

If you are interested in learning about how California’s cannabis legalization movement was started and who several of the main players are in its ongoing evolution – then this little celebration is not to be missed!

Marie Mills first came to Southern Humboldt County, California in 1980. Influenced by the back-to-the-land movement of the late-1970’s she camped out deep in the woods, embraced a lifestyle of self-reliance, and learned to cultivate cannabis by simply doing it.

In 1990, Marie established the first hemp retail clothing store since Prohibition – Hemp Connection – in Redway, California. Her first 10 years in business were dedicated to learning how to craft handmade hemp paper from her homegrown cannabis stalks and to designing, dying, sewing, and perfecting her line of hemp clothing products. In the early days of her operations Marie worked mostly with imported hemp raw materials while developing her cottage industry-based manufacturing techniques.

In 1998, with the help and support of her daughter Teresa, Marie expanded her retail operations. Shortly after opening a second store in Garberville, California a group of local citizens took issue with the fact that Marie’s Hemp Connection business signage prominently displayed a large cannabis leaf image. Their efforts to have her sign removed, or modified, motivated the Southern Humboldt cannabis community to come to Marie’s defense. With the support of a small group of activists Marie fought back and her rights as an American citizen to free speech and freedom of expression were eventually upheld.

Today the Hemp Connection’s sign stands tall atop Marie and Teresa Mill’s storefront, which has become one of Garberville’s most photographed pieces of real estate. With the installation of a Cultural Landmark plaque on June 19th The Cannabis Trail is pleased to focus their spotlight upon two cannabis pioneers, Marie, and Teresa Mills, as well as their iconic Hemp Connection sign.

In 1992, when Casali was 24 years old, he was arrested for cultivating cannabis and spent the next 17 years of his life in and out of the federal court, prison, and probation systems. His cannabis incarceration story is like that of many other men and women who were severely penalized under the mandatory minimum prison sentencing guidelines utilized during the decades-long War on Drugs.

Upon his release Johnny returned to the land and the community he loved. Today, Huckleberry Hill Farms is a beautifully landscaped environment – created with intention and purpose to honor the small legacy cannabis farmers of Southern Humboldt County. Visitors are welcome to stop by and see how Johnny cultivates his high-quality cannabis from heirloom cultivars passed down from his mother.

Johnny Casali has embodied the true spirit of the cannabis cultural revolution for several decades. His story is an important part of the Emerald Triangle’s history. On June 19th, The Cannabis Trail will celebrate his life’s journey with the installation of a Cultural Landmark plaque at Huckleberry Hill Farms.

Treats from Café Feast and more…

The unveiling ceremony will include small bite treats for all to enjoy from Café Feast in the Evergreen Industrial Park, Redway, CA. In addition, Brian Applegarth, the creator of The Cannabis Trail will deliver opening and closing remarks. The Cannabis Trail Pioneer Chart and Regional Map will be on display. Pebbles Trippet (another cannabis and medical marijuana luminary) will provide remarks in honor of Marie Mills and Rose Moberly will provide remarks in celebration of Johnny Casali.

Mission Statement of The Cannabis Trail/TCT

TCT’s mission is to educate, celebrate and preserve the people, places and benchmark moments that have occurred during the California cannabis legalization movement. Their core initiatives are focused upon the establishment and placement of 20+ monuments and markers along a route from Santa Cruz to Trinity County. You can learn more at: www.thecannabistrail.org