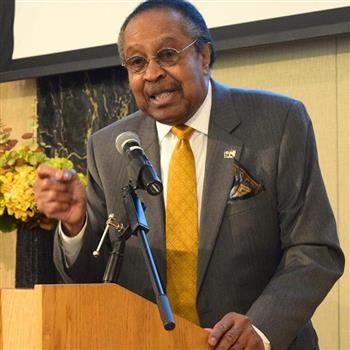 In celebration of Black History Month, join Menlo College in conversation with Dr. Clarence Jones, Scholar in Residence at the Martin Luther King, Jr. Institute at Stanford University and founding director the University of San Francisco Institute for Nonviolence and Social Justice. On February 11, 2021 at 5:15 pm, Provost Grande Lum and Ngozi Harrison ‘19 will lead the college in conversing with Jones on social justice in the time of Black Lives Matter, particularly in the realm of higher education, and the lessons to be learned from the Civil Rights Movement of the 1960s.

Jones served as lawyer and speechwriter for Martin Luther King, Jr. and he was a member of King’s inner circle of advisors, particularly assisting him in drafting the “I Have a Dream” speech as well as participating in planning the Birmingham Campaign. After King’s death, in addition to his law, finance, and public service achievements, Jones has gone on to co-author of “What Would Martin Say?” (2008) and “Behind the Dream -The Making of the Speech That Transformed A Nation” (2011). Jones also provided the foreword to Provost Lum’s award-winning book “America’s Peacemakers: The Community Relations Service and Civil Rights”(2020).

Menlo College was established in 1927. It is a small, private, non-profit, four-year, accredited, residential college located in Atherton, California. Menlo College’s location in Silicon Valley, one of the world’s most entrepreneurial and innovative geographical areas, has enabled the college to create a valuable market niche for its students locally — as well as globally. Menlo College cultivates in its students the skills, integrity, and passion to make meaningful contributions in an innovation economy.